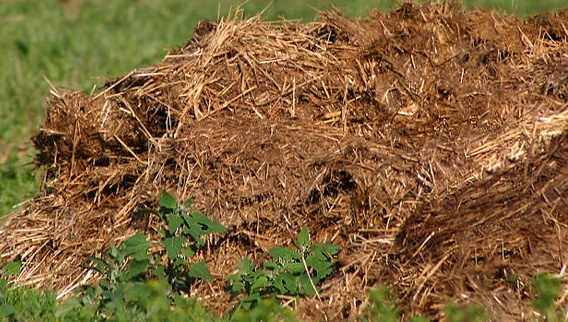 January 17, 2011 – One of the major challenges facing the growing numbers of organic farmers is the ability to efficiently meet the fertility needs of crops without the use of conventional fertilizers. Typically, in addition to green manures and approved amendments, organic operators utilize animal manure to fulfill a crop’s nutritional requirements.  Researchers are discovering, however, that not all manure is created equally. Numerous variables, including animal and manure type and environmental conditions, interact in often unpredictable ways to influence the final product’s unique ability to supply nitrogen and phosphorous.

Miller, a research scientist with Agriculture and Agri-Food Canada, has spent an impressive amount of time studying these elaborate interactions. Over a nine-year period, he and fellow researchers in Lethbridge, Alberta, have monitored soil nitrogen and phosphorous levels in a barley field annually amended with several combinations of manure and bedding at three increasing application rates of 13, 39 and 77 Mg per ha. Their results, entitled: Available nitrogen and phosphorous in soil amended with fresh or composted cattle manure containing straw or wood-chip bedding, are published in the Canadian Journal of Soil Science.

In terms of nitrogen release, “straw [bedding] is definitely better than wood [chips]” when present in either fresh or composted manure at all three applications rates.

Soils amended with straw bedded fresh manure exhibited the largest soil nitrate concentrations.  Although the nitrate form of nitrogen is vital for plant growth, there is always the potential for its accumulation to levels that exceed what is recommended. In fact, in 2004, nitrate levels in the soils amended at the highest application rate with the fresh manure, straw bedding combination were more than 15 times greater than the limits set out by the Alberta provincial government.

The consequences of excessive nitrate levels include nitrate leaching to groundwater sources. In addition, soil nitrates also have the potential to convert to nitrous oxide, a known greenhouse gas.

In contrast to nitrogen, the study established that phosphorous release was similar for fresh and composted manure bedded with either straw or wood chips. Like nitrogen, however, phosphorus will continue to accumulate in the soil with increasing application rates. The study found that after only two years of application at the higher rate, soil available phosphorus exceeded the maximum agronomic threshold for phosphorus as set out by the Alberta government by nearly twenty times. The concern in this instance is the potential runoff of phosphorous to surface waters. Phosphorus runoff has been linked to the eutrophication of oceans, lakes and streams.

From an agronomic perspective, “you need to decide what your objective is,” points out Jim.

For a farmer that likely means identifying existing soil nutrients as well as the crop’s agronomic needs. In other words, “there is an increased need for soil budgeting rather than simple soil tests,” says Jim. A nutrient management plan indicates the nutrient requirements of each crop. In the study, manure application rates were the same, year after year, with no accounting for nutrient requirements. The result was excessive nutrient levels in relatively short periods of time.

Jim also points out that farmers may have other objectives when considering the right manure bedding mix. Several studies have concluded that bedding mixtures that utilize wood chips will keep cattle cleaner. Organic farmers with mixed operations, concerned with issues of health and sanitation, might consider this variable more important than slightly reduced amounts of plant available nitrogen.

Whatever the farmer’s choice, it is clear that every manure mixture will have its pros and cons.

“There’s no such thing as a free lunch since nitrogen and phosphorus can only be redistributed or transformed within the ecosystem and the nutrients cannot be destroyed,” Jim admits.

The good news is that he and his fellow researchers will continue to study the effects of long term manure use on agricultural soils and, more importantly, on the environment. The results will affect both organic farmers and Canadians as a whole.


Related
In the news: Janaury-February 2011
Turning manure into asphalt
NMPs: A study in cause and effect
Livestock manure: an option for replenishing soil nutrients in hay fields