The agriculture industry is one that must always adapt quickly to multiple challenges, such as extreme weather events, trade disputes and fluctuating prices. More recently, the COVID-19 pandemic added to these challenges in the form of labour shortages, disruptions in the food supply chain, and rising input prices. All of these issues play a role in the well-being of farm operators. In view of these challenges, collecting information about the status and resiliency of the agricultural sector is important.

Census data indicate that trends identified in previous census cycles, such as industry consolidation and aging of farm operators, continued in 2021. At the same time, the agriculture industry is adapting and modernizing, with higher rates of technology adoption, renewable energy production, use of direct marketing solutions, and sustainable farming practices.

In addition, the 2021 Census of Agriculture shows that livestock inventories and acreage for prominent crops have remained quite stable and even increased modestly since 2016, suggesting that farmers have proven to be resilient in the face of COVID-19 challenges. The industry has also been characterized by the emergence of niche sectors, as evidenced by the increase in the total reported area for greenhouses.

In 2021, the Census of Agriculture counted 189,874 farms, a moderate decrease of 1.9 per cent from 2016. While farms in Canada reported a 3.2 per cent decrease in total farm area from 2016, the total area for hay and field crops increased slightly, by 0.3 per cent, to 92.9 million acres in 2021. The number of head reported for major livestock categories has also increased modestly since 2016.

Change in the farm definition

A significant conceptual change to the main statistical unit used by Statistics Canada’s Agriculture Statistics Program has been introduced for the 2021 Census of Agriculture: a “farm” or an “agricultural holding” (i.e., the census farm) now refers to a unit that produces agricultural products and reports revenues or expenses for tax purposes to the Canada Revenue Agency. Before 2021, a “farm” was defined as an agricultural operation that produced at least one agricultural product intended for sale. The change in the new farm definition may result in farms being classified differently across farm types than in previous censuses. As a result, comparisons with earlier census results should be interpreted with caution.

Large farms continue to change the face of the agriculture industry

Over time, farms have been evolving to become increasingly sophisticated businesses that harmonize automation, modernization and production operations. As a result, many farms have consolidated and become increasingly larger both in terms of sales and number of employees. Conversely, smaller and mid-sized farms are declining in Canada, thereby affecting the rural landscape and profile of Canadian regions.

Continuing the trend of farm consolidation from the previous census, the proportion of farms in the top two sales classes increased, while the number of smaller farms declined. The proportion of farms with sales of $1 million or more in 2020 was 9.9 per cent, up from 7.2 per cent in 2015.

Farms preparing to pass on to the next generation

The aging of Canadian farmers is not a new phenomenon and follows general population trends. Recently released data from the 2021 Census of Population indicated that the median age of Canadians was 41.6 years (up from 41.2 in 2016) and that 33.1 per cent of Canadians were at least 55 years old.

Proportion of farm operators by age category, Canada, 2016 and 2021 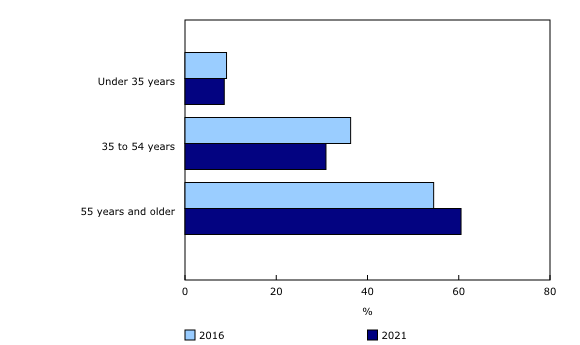 The challenges associated with the COVID-19 pandemic and the aging of Canadian farmers may have caused some farm operators to consider succession plans for their farms. In 2021, 6,673 more farms reported having a succession plan than in 2016.

From 2016 to 2021, intermediate-sized farms reporting operating revenues from $50,000 to $99,999 reported the highest proportional increase (+3.9 percentage points) in succession planning compared with the other sales classes.

The price of land is an important factor in the investment and management decisions of farms, particularly in an environment increasingly defined by large market players. Strong commodity prices, low interest rates and a growing demand for housing in urban areas have been identified as contributing factors to the rising value of farmland in Canada.

The market value of all farm vehicles, machinery and equipment increased by 3.9 per cent from the previous census, reaching $64.4 billion in 2021.

Sustainable practices becoming a hallmark of the agriculture industry

Another source of transformation in the agriculture sector is the use of sustainable practices to cope with climate change. These adaptations are important, as the frequency of extreme climate events has increased in recent years and such events could represent a challenge for the industry in years to come.

Land practice methods include in-field winter grazing or feeding, rotational grazing, plowing down green crops, planting winter cover crops, and having shelterbelts or windbreaks. In 2020, 64.5 per cent of farms reported land practices, up from 53.7 per cent in 2015.

Another way Canadian farms have adapted to warmer and drier conditions has been by shifting their focus to more drought-tolerant crops, such as barley. From 2016 to 2021, farms in Canada reported a 24.3 per cent increase in barley acreage. This was the biggest percentage increase among the top 10 contributors of hay and field crops reported in Canada. In 2016, farms reported 6.7 million acres of barley, and by 2021 there were 8.3 million acres.

Over the past few years, numerous programs and policies have been implemented by governments to encourage farmers to adopt renewable energy production methods, such as solar energy production.

Technology use is another growing trend in the agriculture industry as it improves the accuracy and efficiency of farm processes and helps farms stay competitive in the global trade market. Examples of technologies that became more prominent from 2015 to 2020 include automated guidance steering systems (+28.2 per cent) and geographic information system (GIS) mapping (+58.6 per cent).

Farmers ensuring Canada’s agricultural outputs are maintained during the pandemic

Data from the 2021 Census of Agriculture show that livestock inventories and acreage for prominent crops have remained quite stable and even increased modestly since 2016. As noted above, total hay and field crop area increased by 0.3 per cent since 2016, to 92.9 million acres.

As was the case in 2016, canola remained the top crop acreage in Canada among all types of hay and field crops in 2021, despite a ban from China that restricted total canola exports from Canada in 2018 and 2019. In 2021, farms in Canada reported 22.3 million acres of canola, an 8.1 per cent increase in canola acreage from the previous census. The number of farms reporting canola rose 0.8 per cent from 2016 to 2021.

Canola acreage was not the only field crop to increase from the previous census. For example, farms reported a 2.1 per cent increase in spring wheat acreage from 2016. Spring wheat remained the second-largest crop reported in Canada in 2021, with 16.0 million acres, followed by barley, alfalfa and durum wheat. 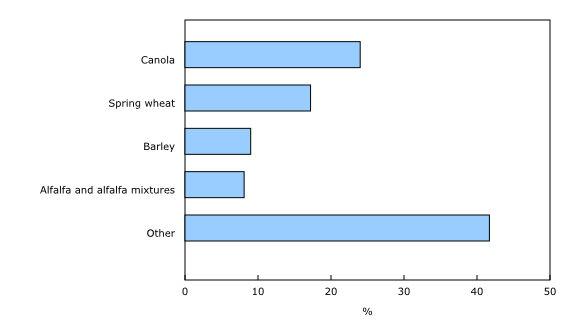 Greenhouse sector is emerging as a key industry in Canadian agriculture

One development in the horticulture sector has been the growth of the greenhouse industry, which constitutes an alternative way to provide a steady supply of fresh produce to local communities.

Farms incur 83 cents in expenses for every dollar of revenue

Farm operating revenues in Canada totalled $87.0 billion in 2020, while expenses reached $72.2 billion. On average, for every dollar in revenues, farms incurred 83 cents in expenses. The expenses-to-revenues ratio across farm types shows that farms classified as oilseed and grain farming were the most profitable farm type in 2020, with an expenses-to-revenues ratio of 0.76. Conversely, sheep and goat farms had the highest ratio, at 0.97.