News
2008 Dairyman of the Year Award is a family affair

October 20, 2008, Madison, Wis. —
Farming with family members is a time-honored tradition – a tradition
that has led one Wisconsin dairy farm family to a new honor: The Crave
brothers of Waterloo, Wisconsin, have been named 2008 World Dairy Expo
Dairymen of the Year.

October 20, 2008, Madison, Wis. — Farming with family members is a time-honored tradition – a tradition that has led one Wisconsin dairy farm family to a new honor: The Crave brothers of Waterloo, Wisconsin, have been named 2008 World Dairy Expo Dairymen of the Year. 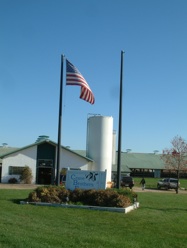 In the span of 30 years, the Crave brothers created a family dairy farm that has become internationally known for its productivity, innovation and environmental sustainability. Along the way, they also created a farmstead cheese plant that uses milk from their farm in award-winning artisan cheeses.

The brothers, raised on a 40-cow Wisconsin dairy farm, started their business in 1978, milking 57 cows on a rented farm. They now farm 1,800 acres and milk 1,200 cows three times a day. The Craves built one of the first modern free-stall milking facilities in their area, and were leaders in adapting TMR (a nutritionally balanced “total mixed ration” of feed for a herd). The brothers emphasize herd comfort and quality, and their animals earn top honors at state and national shows.

The Crave brothers make it a priority to protect the environment in all aspects of their agri-business. For example, they have an anaerobic manure digester that creates enough electricity to power their farm, their on-farm cheesemaking facility, and 120 homes. The Craves often partner with the nearby University of Wisconsin-Madison in engineering, profitability and on farm trials.

In 2002, the Crave Brothers Farmstead Cheese plant was built to utilize the fresh milk from their cows, and George became a licensed cheesemaker. The family now produces an array of prize-winning, hand-crafted specialty cheeses, including fresh Mozzarella, Mascarpone and proprietary varieties such as “Les Frères” – a French term that translates as “the brothers,” a nod to the family enterprise.

The Crave brothers and their families actively support agri-business organizations and projects, and open their farm to tours of nearly 1,000 visitors each year.