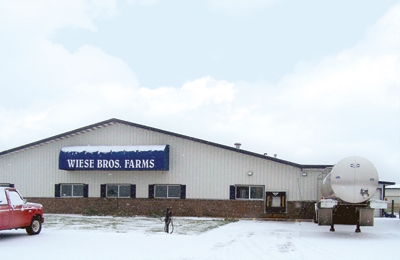 Installation of a manure combustion system will allow Wiese Brothers dairy to double its milk cow herd from 2,000 to 4,000 head. Contributed photos

Is burning your manure a better option than land applying or investing in anaerobic digestion? The technology now exists to combust manure to generate power. The prototype has proven the concept and is being upgraded to handle the manure resulting from a twofold expansion of a Wisconsin dairy farm.

Two breakthroughs advanced the Elimanure technology developed by EcoCombustion Energy Systems compared to attempts to burn manure in the past. These were learning to handle the high percentage of non-combustibles in manure and techniques to manage air emissions to satisfy Environmental Protection Agency (EPA) requirements. Adapted from the pulp and paper industry, the technology is the brainchild of company cofounder, Paul Schneider, who with the assistance of a federal agency called Farm Pilot Project Coordination Inc. (FPPC), established a 600-kilowatt installation on the Wiese Brothers dairy farm in Brown County, Wis., in 2005.

Although Schneider made his living in the pulp and paper industry, he never forgot his strong farming roots, realizing that the problem for large farms wasn’t the fiber in the manure, but the nutrient-rich liquid that was running off into watercourses. He adds that hauling the liquid manure also represents a huge expense for farmers.

“If you stretch your imagination, what we do in the paper industry is very similar to problems that you have with manure,” says Schneider. “In the paper industry, we separate the fiber from the liquid and then we need to manage the liquid as well. My concept is to evaporate the moisture in the manure, burn it, and then create energy.”

The company has finalized its patented combustor design and secured a combustor manufacturer that has given a 100 percent guarantee on the system’s energy output. Developing a strategic alliance with the manufacturer means that the company no longer needs to build its own units, but can have them manufactured commercially by a company that builds as many as 3,500 combustors a year. The manufacturer can also build them cheaper and more robust. EcoCombustion Energy has designed three sizes.

Finding a combustor manufacturer willing to work with the company was a challenge because of issues associated with the manure’s ash content. Burning sawdust produces about two percent ash while manure produces about 15 percent.

“With the help of FPPC, we got a grant to study how to burn the manure at high temperatures,” says Schneider. “So we designed a combustor and we have the expertise for operating the combustor to burn that high ash content. Once we learned that and were able to prove it, then the combustor manufacturers had confidence to work with us.” Farms will need to dispose of the ash, but it is considered a soil amendment and it can be land applied. It is a lot less expensive to transport ash than liquid manure. The ash is a 0-8-10 chemical compound, so farmers will still be limited in how much can be applied per acre in many areas because of its phosphorus content. Where it shines is as a seed starter soil amendment.

The Wiese dairy installation is certified as a renewable energy facility. Schneider says it does not put any more carbon into the atmosphere than would have occurred naturally through land spreading. The system initially had issues with controlling air emissions, but the installation of pollution control equipment has been a game changer, and has resolved the problem.

The Wieses are doubling the size of their farm from 2,000 to 4,000 milk cows and are expanding the Elimanure system to support the expansion. The first phase will be focused on doubling the farm’s capacity to dry and burn the manure using the same turbine to generate 600 kilowatts of power. The second phase in about a year will add a second turbine, which will result in doubling its electrical output to about 1.2 megawatts. There will be a total of 9,000 cows on the farm, which includes their heifers and young stock. The construction project will feature a total redesign and rebuilding of the manure drying and combustion system based on what EcoCombustion Energy has learned from operating the prototype. The system is quite efficient, as the heat generated from combustion is used to evaporate moisture from the manure. Once completed this October, the dairy will be disposing of 45 million gallons of manure annually either by incineration or by recycling into bedding.

The net benefits of installing the Elimanure system to farms are elimination of greenhouse gas emissions such as methane into the environment, the potential to generate their own power, simplification of manure handling, production of their own cow bedding material, and sale of power to a utility. The power generated is also available 24/7, which makes it more attractive as an alternative energy investment for power utilities than solar or wind.

“In Brown County, the requirement is to have three acres of land per cow to spread manure,” says Schneider. “Because the Wieses won’t be putting the manure on the land, their need to have additional land to expand is no longer necessary.”

“We work best in systems where the manure is somewhat thicker and drier,” says Schneider. He understands why many dairy farmers adopted anaerobic digestion because it was the only manure processing technology available, although it does not eliminate the need for land spreading. Farmers needed to take action to maintain their permits. Schneider adds that both Elimanure and anaerobic digestion reduce the carbon footprint from agriculture and an additional benefit of Elimanure is that it can help overcome land spreading issues.

The farming community has shown considerable interest in what EcoCombustion Energy is developing at the Wiese dairy. Schneider says he expects that sales will take off once the commercial version proves itself at that location. The success and value of this installation in the eyes of the farming community is extremely important to the company, as developing the process has been costly, with government grant support provided only for the initial prototype. The company must also overcome some of the skepticism that farmers have developed concerning alternatives to traditional methods of land spreading manure that haven’t succeeded.

“Because of some of the problems that have been experienced from anaerobic digesters, farmers are very, very nervous about new processes,” says Schneider. “Farmers would like to see it work first. We have to complete the Wieses’ project and have it running, and then sales will go.”

Large farms are operating more and more like industries such as the pulp and paper industry, Schneider says, which has created a trend for more engineered processes making their way to large farms.

“I think the time has come when we are going to see an awful lot of new technologies, new innovations, and new ways of doing things on the farm,” says Schneider. As farms get bigger, farmers are starting to see the value of engineered processes and are becoming more industrialized. Industrial technology like Elimanure is just one example of that trend. As time progresses, EcoCombustion Energy intends to develop additional manure handling and alternative energy solutions.

The minimum entry point at which an Elimanure system would make financial sense is a farm milking about 1,500 cows with a total herd of 3,700 cows or larger. That’s because of the cost of power turbines and the amount that utilities are prepared to pay at present for renewable energy. EcoCombustion Energy is hopeful that the situation will change in future so that renewable energy prices are higher and the price for turbines comes down.