Located in hurricane alley, many of North Carolina’s hog producers have learned a number of lessons over the years on how to mitigate damage caused by severe weather events. 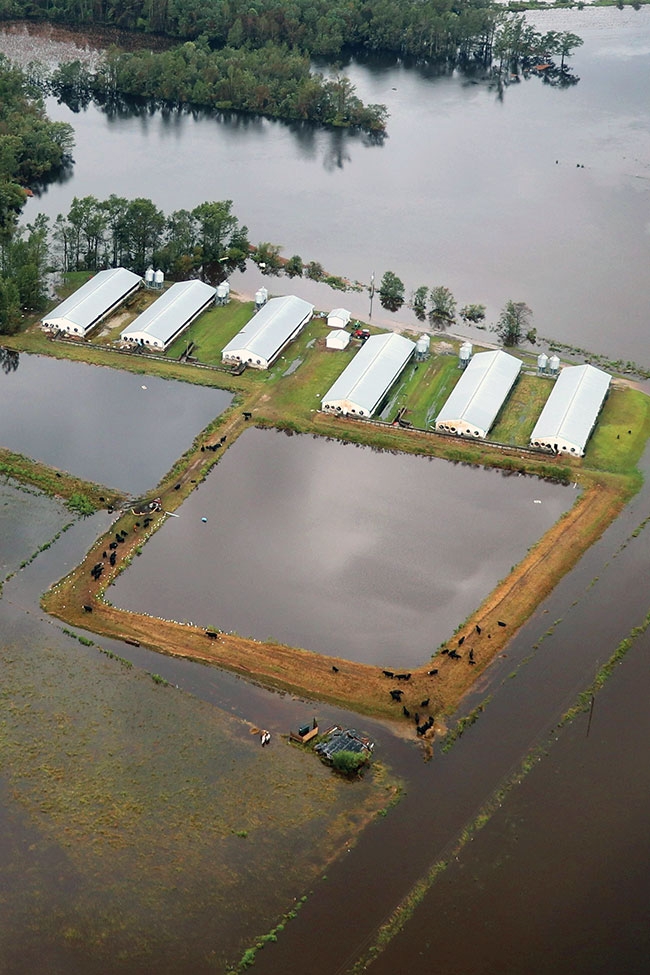 Preparedness made a big difference in the minimal impact that manure from North Carolina’s hog industry had on the environment as a result of Hurricane Florence. All photos courtesy of the North Carolina Pork Council.

Manure storage lagoons and hurricane-force wind and rain are not a healthy mix. And, as the frequency of severe storms increases, dealing with wild weather is becoming a stark reality for producers in hurricane-prone areas like North Carolina. Many lessons have been learned by the state’s hog producers over the years on how to mitigate the potential consequences of these severe storms.

North Carolina is the second largest pork producing state in the U.S., with about nine million hogs being raised on 2,100 farms. The industry manages about 3,300 storage lagoons. Unfortunately, it is also part of hurricane alley.

“We’ve experienced a lot of hurricanes in our recorded history,” says North Carolina Pork Council (NCPC) chief executive officer, Andy Curliss, and the number and strength of incoming hurricanes is highly variable from year-to-year. The two most recent and significant storms were Hurricane Matthew in 2016 and Hurricane Florence in 2018, but residents of North Carolina still remember and talk about the devastation wrought by Hurricane Floyd in 1999, which killed a devastating 21,000 hogs.

The images of last fall’s Hurricane Florence and its impact on the state are still fresh in the public’s mind. As the hurricane passed through the state, it left a swath of damage spanning anywhere from 500 kilometers (300 miles) to 800 kilometers (500 miles) wide. Overall damage from the storm is estimated to have been as much as $22 billion. And, 40 people died as a result of the storm.

Hurricane Florence dropped anywhere from 20 to 38 inches of rain, in many cases, breaking records set by Hurricane Floyd, according to the National Weather Service. A major challenge with Hurricane Florence was the amount of rain that continued to fall in the state after the hurricane force winds had passed.

A major challenge with Hurricane Florence was the amount of rain that continued to fall in the state after the hurricane force winds had passed.

Hog producers, Elwood and Jill Garner, own E and J Farms about an hour-and-a-half northwest of Wilmington, N.C., which sits along the coast and suffered the brunt of the storm when it made landfall. They finish hogs on contract for Smithfield Foods in six barns, which have a total capacity of 5,280 hogs. They operate very near to the Cape Fear River basin.

“From a manure standpoint, we got 37 inches of rain in a four-day period,” Garner says, “but from an environmental standpoint, we did well. We try to get all the lagoons down starting in May. Before the storm came, I was sitting on 50-plus inches of freeboard from the water level in the lagoons to the top of the dyke.”

His farm was right in the centre of the storm, “and it just sort of sat on top of us for a couple of days. It was barely moving more than a mile or two an hour.”

Part of the problem with farms in the neighborhood is that high river waters flowed into some lagoons, which is an unpredictable challenge not easily managed.

The NCPC wants to put lagoon overflow into perspective, stating on its website that, “when a lagoon is inundated, the walls remain intact, but floodwater rises over the sides and fills the lagoon. This does not cause a catastrophic environmental effect.”

That is because, by design, solids are stored and remain at the bottom of the lagoon, and the liquids on the top are heavily diluted, minimizing the environmental impact.

In the aftermath of Hurricane Florence, North Carolina’s Department of Agriculture and Consumer Services estimated about $23 million in losses for livestock, poultry and aquaculture growers. There were 5,500 hog mortalities, but substantially more poultry deaths, estimated at 4.1 million chickens and turkeys. The poultry industry is currently experiencing a building boom in North Carolina, while the hog industry has remained stable largely because of a moratorium placed by the state on any new hog operations in the late 1990’s.

The number of hog mortalities from Hurricane Florence is only one-quarter the number that died from Hurricane Floyd in 1999, likely as a result of two mitigating circumstances. The first is the aggressive program started in 2000 after Hurricane Floyd, with the support of the NCPC, to purchase hog operations located in the state’s one-in-100-year floodplain to reduce the number of hog farms likely to be impacted by future storms. The program is conducted by the Department of Agriculture and Consumer Services in partnership with the USDA’s Natural Resources Conservation Service. So far, $18.7 million has been spent to purchase 42 swine operations and the program is still active. The program has taken 325 hog lagoons out of commission. About 60 farms still remain in this floodplain area.

The program has taken 325 hog lagoons out of commission. About 60 farms still remain in this floodplain area.

The second mitigation measure is how seriously local hog producers take the potential consequences from severe storms of the magnitude of Hurricane Florence. As a storm bears down, the industry evaluates which farms may be susceptible to the most amount of rain based on the storm’s predicted path, and arrangements are made to move hogs to market or to higher ground, sometimes in other states.

“We carried a lot of pigs to the Midwest in advance of Florence,” Curliss says. “We did not have any one whole house lost in Florence. The mortality loss was really minimal.”

Wind and barn damage as a result of suspected tornadoes mixed in with Hurricane Florence is believed to have caused some of the hog mortality.

In terms of preparedness, the hog industry also ensured that there was plenty of feed, power generators and personnel available to continue to care for the hogs in the hurricane aftermath because floodwaters typically from overflowing rivers make travel on roadways difficult and impossible in some cases. With Hurricane Florence, the use of helicopters in some instances was not uncommon.

“A lot of our farmers just slept in their barns, frankly, to make sure that they could care for those animals,” Curliss says.

“A lot of our farmers just slept in their barns, frankly, to make sure that they could care for those animals.”

Garner adds that there were lessons learned from Hurricane Floyd in 1999.

“Floyd was a lot worse on me than Florence was,” he says. “I was not as well prepared with Floyd, but it taught me a lesson that I needed to be prepared, and that’s something we have tried to do annually ever since.” 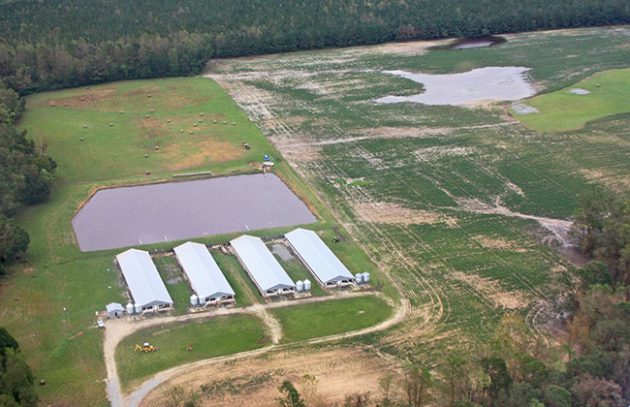 However, all the planning in the world cannot stop every consequence of such a severe storm as Hurricane Florence. According to the North Carolina Department of Environmental Quality, by noon on Sept. 18, 2018, when the storm was winding down, the walls of four storage lagoons had structural damage, nine more lagoons were being overwhelmed by flooding from nearby streams, 13 were overflowing their banks because of rainfall, and several dozen were near their limit.

“You have to keep context in mind,” Curliss says. “With 3,300 lagoons, we had impacts to a handful in a one-in-a-thousand-year storm. We don’t want any impact from any storm from any lagoon, but we did pretty well given the impacts of this storm.” For example, he says that the Army Corp of Engineers had 20 dams fail as a result of Hurricane Florence and many municipal lagoons failed, discharging human waste into river waters.

“With 3,300 lagoons, we had impacts to a handful in a one-in-a-thousand-year storm. We don’t want any impact from any storm from any lagoon, but we did pretty well given the impacts of this storm.”

The Department of Agriculture and Consumer Services credits its floodplain purchase program for mitigating a much worse outcome. The Department believes that of the 42 swine operations bought out, about 34 would have likely flooded again when Hurricane Matthew hit back in 2016.

“I think the buyout program has worked,” Garner says, “I just wish the state would allow these producers to move their permits to a new location.” The moratorium essentially means that once a producer is bought out, they can’t relocate, the state loses production, and this impacts the entire industry.

Curliss says that their members’ lagoons can typically withstand 30 inches of rainfall by the peak of the hurricane season, and the council’s website goes on to state that, “every hog farm in the state must maintain a minimum buffer of 19 inches to allow for significant rain events. This minimizes the risk of a lagoon overflowing. It is rare for a farm to have only 19-inch buffer. Many have a capacity for greater at all times, especially as the peak of hurricane season approaches.”

Farm practices in North Carolina are such that many lagoons are in the process of being emptied and nutrients land applied as part of the summer growing season before the hurricane season typically hits in late summer. So many lagoons have plenty of capacity, and a survey conducted by NCPC prior to Hurricane Florence in mid-September, 2018 showed that was the case.

Hog producers can sometimes face land application challenges when a lot of rain has fallen during the spring and summer, saturating the soil so that it cannot accept a lot of liquid nutrients, although summers in North Carolina tend to be quite dry. If there is a lot of moisture in the soil already, this can present a problem once the hurricane season hits.

The NCPC says that within five days of Hurricane Florence, most of their 2,100 hog farms were able to resume normal operations. 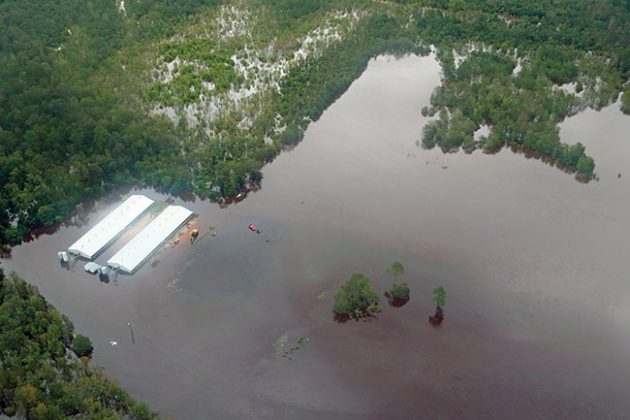 When it comes to weather events of this velocity, having a foolproof emergency strategy or plan is vital and can be the difference in saving livestock and livelihood. So, where do you start? How can you best prepare your operation to mitigate risk in extreme situations?

Surveying your property is the first step. Examine the layout of your farm – the location of farm buildings, manure storage, overhead powerlines and poles, fencing and the condition of building exteriors. What about the trees? Non-native plants will be less hardy and may dislodge in high winds. If trees were to fall, what damage would this cause? Can this be mitigated? Think about the layout of the farm and how the property would tolerate extreme winds and heavy rainfall.

Producers should also think about debris in the farmyard, as this is often the culprit of additional damage to structures. Contain, tie or weigh down any containers or material that may become a weapon in hurricane winds. Inspect fence lines for any impairments, secure heavy farm equipment, label and secure any on-site hazardous materials.

If your farm is located in a high-risk area, consider working with the state department of agriculture and county extension personnel who can assist in developing an evacuation plan as well as provide site-specific oversight on how to best prepare the farm.

Ahead of the storm, evacuation or shelter in place, farmers should ensure that every animal has durable and visible identification. Written inventory of all livestock (including breeding and expense records) should be kept within an arm’s reach. An additional helpful item – a disposable camera. Documenting the storm and any resulting damage will be critical for farm records, insurance and rebuilding.

The agriculture community is certainly no stranger to talking about the weather, but as the frequency of wild weather events increase, it will become even more important for livestock producers and movers of manure to keep tabs on the forecast. When disaster is looming, listen to the meteorologist, the Hurricane Center and state representatives for changing conditions, state of emergency declarations and transportation rule suspensions.