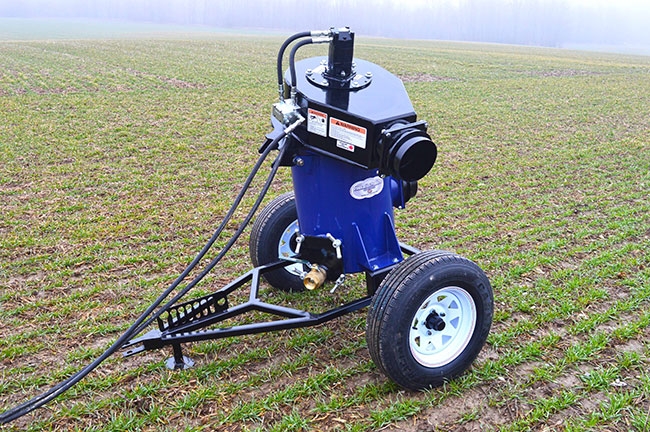 WER Manufacturing’s in-line chopper is installed between the agitator/feed pump and the main pressure pump in a dragline system or before the load pipe for tankers. Contributed photo

It seems that sales of manure macerators are up, as they can be used with different types of injectors and help address the higher flow rate of manure pumps in North America. And new designs have improvements significantly over old ones.

Christine Brown, field crops program lead at the Ontario Ministry of Agriculture, Food and Rural Affairs, says macerator systems are an important part of most application equipment that distributes manure to narrower bands, such as dribble bar spreaders.

There’s been a need for improvements to choppers over the last few years, notes Trevor Sutcliffe of WER Manufacturing in Walton, Ont., which sells an in-line and on-board chopper.

“There have been a lot of complaints in the industry about uneven distribution from on-board choppers and associated system shutdowns,” Sutcliffe explains. “Most of the time a shutdown will take at least half an hour or more and when a custom guy is charging $600 to $800 per hour, it’s a killer. Achieving both an even distribution and a good cutting action at a reasonable cost is key.”

Sutcliffe notes that in Ontario, demand for macerators can go up depending on regulations in effect and grants available to promote manure injection. However, he says that while “some farmers are totally sold on injection and won’t do anything else – grant or no grant – the majority see it as taking too long and a hassle so they don’t do it, even though there are proven yield benefits in the crop from doing it.”

According to Sutcliffe, Wisconsin and jurisdictions west of there mostly either mandate top spreading or are very strict about other options, making top spreading attractive.

“In Eastern Canada and the U.S. at the moment, regulations about top spreading seem more relaxed, with Ontario having probably the most relaxed rules I have come across,” he says.

The majority of spreading implements currently sold are therefore geared to surface distribution and Sutcliffe says that was one of the reasons for the development of the in-line chopper.

“That way you get rid of anything large enough to block nozzles on the spread booms, which are usually two- to three-inches in diameter and can still plug easily.”

Jamesway Farm Equipment of St-Francois-Xavier-de-Brompton, Que., sells its products through about 200 dealers covering large areas of Canada and the U.S., with sales of its dairy and other equipment outside of North America by DeLaval. Their unique mascerator is called the Pumpeller. Its hybrid turbine provides the high-volume mixing of a propeller mixer and the reach of a high-pressure cannon in a single unit, without needing a submerged gearbox in the lagoon.

“Large and difficult solids feed easily into the large inlet, where they are chopped at 50 cuts per second as they enter the turbine,” says Ralph Fanning, sales manager. “Pumpeller mixes difficult lagoons in much less time and using much less fuel compared to conventional pumps.”

WER Manufacturing’s in-line chopper is installed between the agitator/feed pump and the main pressure pump in a dragline system or before the load pipe for tankers.

Tyler Misch, his father, Merv, and brother, Tanner, bought a Pumpeller in 2012 for spreading dairy manure at their operation (Misch Farms) in Dobbinton, Ont. They spread both their own dairy manure and a neighbor’s pig manure on their land. Tyler says the Pumpeller works really well and agitates their tank very quickly.

“The custom guy we had spreading for us (before we decided to do it for ourselves) was agitating for hours and hours, and we’re spreading within an hour,” he reports. “We have a thick crust with the dairy manure and the pump doesn’t have an issue. I also like that you can control everything from the tanker tractor.”

Boerger LLC offers its Rotorrake chopper all over North and South America. It’s a single-shaft inline coarse chopper with counter-blades cleaned by rotating cutting blades on both sides. Some models have a built-in debris catchment and different sizes provide throughput volumes of up to 800 m³/h. Sales representative Drew Vollbrecht says macerators are in higher demand these days, especially for digesters where a more consistent substrate stream provides higher gas yields.

WER Manufacturing offers a fully mobile in-line chopper installed between the agitator/feed pump and the main pressure pump in a dragline system or before the load pipe for tankers. When it is used in conjunction with the firm’s on-board chopper, large chunks are hit twice when travelling through the system before they get to the smaller injector hoses/spread nozzles. Sutcliffe says self-sharpening rotary knives rotate with the circular action of the blade holder plate, as the blade plate rotates the rotary knives spin, creating a high-speed shearing action similar to a pair of scissors. The new quick access top hatch allows for a quick way to access blades for checking and replacement. The catchment area is accessible at the base or through the opening lid at the top of the unit.

Ontario Greenways in Mitchell, Ont. purchased a WER chopper for its injector about 10 years ago. Manager Steve Gloor believes macerators will be in demand in future in Ontario because manure injection will become
more common.

“With the issues around run-off of phosphorus into surface water of Lake Erie, there will be changes to the Nutrient Management Act, and more and more, we’ll see a shift from surface application to injection of nutrients,” he says