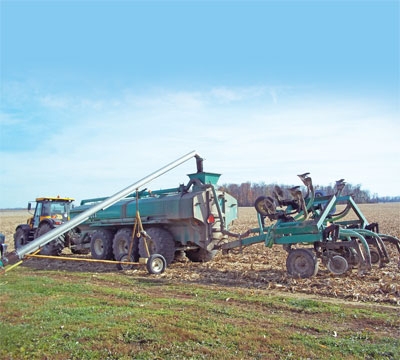 Customers often ask custom manure applicator Eric Dresbach to point out where he has land applied the manure from their hog or dairy farms because when they inspect the job, they can’t smell it. He takes that as a compliment.

It means that his philosophy of providing good training for staff and delivering quality service for more than 25 years is working. He believes that if applicators want to be treated like professionals, then they have to behave like professionals.

He adds that the JCB tractors, Houle honey wagons and Dietrich shanks, which he uses exclusively in his fleet to apply the manure exactly where it is needed to maximize nutrient value to crops, also deserve a lot of credit.

Dresbach owns W.D. Farms Inc, located in Circleville, Ohio, about 25 miles from Columbus. They custom apply between 30 and 40 million gallons of liquid manure annually, typically transporting the manure to fields five to eight miles from the manure source, and have worked in Ohio, Indiana and Michigan. Normal business radius is about 200 miles from home base. The company employs five to 10 people, depending on the time of year.

After finishing college in 1980 with a degree in agronomy from the Agricultural Technical Institute (ATI), a branch of Ohio State University, Dresbach began farming in partnership with his dad and brother.

“The early ’80s was a tough time for a beginning farmer, so I started a grain and fertilizer trucking company called W.D. Farms in the fall of 1985,” he says. He bought out his partner in 1995 and at that time began focusing entirely on custom manure application.

“Our specialty is liquid manure,” says Dresbach. “It can be anything from up close ‘pump and dump’ with tractors and honey wagons to where we put it in a semi, run it up the road, transfer it to a honey wagon and then apply the product. We have become a very good traveling circus because of this practice.”

The majority of the company’s business is done with hog producers. He and his staff also provide their services to the dairy industry. They typically inject hog manure and broadcast dairy manure.

Dresbach prefers to describe his company as a custom provider of “organic nutrient recycling” rather than custom manure application because this description presents manure as having value as a natural fertilizer. But he also recognizes that it requires careful management.

“We always do what is right no matter what and always assume someone is watching.” That’s the first principle that the company has posted on its website, closely followed by, “we believe in good housekeeping at all times.”

Dresbach knows that his service isn’t the cheapest among custom manure applicators in his area, and that can be a tough position to take in a weak economy with the agriculture industry struggling. But he is more interested in building a clientele of repeat customers who understand the value in his service than in racing around a field doing a mediocre job just to pad his bottom line.

“In the long run, we’re the cheaper option,” he says, “but in the short run, it’s more dollars today but you have someone who cares.” He agrees with local agriculture extension experts who say that the value of the manure depends on the quality of the application. When the manure is properly injected, the nitrogen is retained in the soil and neighbors are happy because there is minimal odor emanating from the field.

“I tell my employees that I don’t care if you are over the hill and behind the woods and you are faced with a situation where you could do it right or fast and easy,” says Dresbach. “You do what’s right.”

Dresbach is the president of the Midwest Professional Nutrient Applicators Association, representing manure haulers in Ohio and Indiana. He is also a past board member of the Great Lakes Bio-Solids Management Association (USEPA Region 5). He, his tractor operators, and two of his three teenage children who are actively engaged and interested in being part of the business, have taken training to receive their Ohio certified livestock manager licenses. The Ohio Department of Agriculture requires this license for anyone handling more than 4,500 dry tons per year or 25 million gallons of liquid manure. Dresbach’s daughter has also started college at ATI, working toward her degree in agriculture business.

W.D. Farms Inc. has a fleet consisting of three 7,000-gallon Houle honey wagons with Dietrich shanks for incorporation, pulled by 8310 and 8250 JCB Fastrac tractors. Each piece of the company’s fleet has been carefully selected for the value it brings to help W.D. Farms operate efficiently while performing quality service for customers.

“We’ve been very happy with our new 8310 JCB tractor because we get about 15 percent better fuel economy and 42 miles per hour road speed,” says Dresbach. “It’s not unusual for us to move 50 miles at a time, so the road speed is huge and the suspension improves the quality of life for the operators.”

The company has been using Houle honey wagons for about 16 years and staff appreciate the suspension-less steering system on the wagons. Dresbach describes it as a hydraulically captured loop system on the three-axle wagons, which allows it to roll over the terrain better, keeping the load more level and thus avoiding a weight shift to a single axle. This reduces breakage and the likelihood of putting a 40,000-pound load on one axle.

“It also rides a lot smoother,” says Dresbach. “Combined with the suspension that is also on the tractor, when you come across a rise or a bump, it won’t even chatter. We don’t have drawbar wear and it’s an operator comfort issue.”

Also, Dresbach says, with the honey wagons’ front and rear axles that can turn when traveling down the road, the wagons do practically no damage to roads compared to wagons on a fixed-axle system, which sometimes skid especially on turns. This also contributes to reduce wear and tear on their wagons. They’ve had two axle issues in 16 years with the Houle honey wagons.

Behind the honey wagons, W.D. Farms pulls custom-built, nine shank incorporators with Dietrich manure injection systems. The amount that the company is able to apply, given the length of their incorporation system has a definite impact on the bottom line, as they are paid by the number of gallons applied.

“Other tanker wagon companies are typically pulling only four or five shanks at 12 or 14 feet, but we are pulling nine shanks at 22.5 feet,” says Dresbach, which means that they can apply more manure in the same amount of time. The honey wagons are also equipped with a custom-built transfer system to pump the liquid manure from the semi-trailer trucks to the wagons.

Dresbach has high praise for the Dietrich shanks, which shatter and fluff the soil and allow the manure to be applied exactly where it is needed.

“We have very little manure showing on the surface,” says Dresbach. “It’s in the right place and undercover so that it doesn’t run off. That’s the only shank I will run.”

The company’s fleet also consists of a 9220 John Deere tractor and four semi-trailer trucks with double conical tanks for long distance transport. Using this type of tank on each semi means it has a lower center of gravity, making transport more stable and the solids flow out of the tank from a lower centralized point. Dresbach says it is easier to keep the tanks clean, especially when transporting material with high solids content.

They also have a VMI dredge to recover valuable solid nutrients from the bottom of lagoons. It is a valuable organic fertilizer because it can be up to five times richer in nutrients than standard hog manure. This piece of equipment is also helpful to remove settled sand in dairy lagoons, as more dairies move toward sand bedding for their animals.

Rounding out the fleet is a collection of Houle, Godwin and Cornell agitation and transfer pumps.

Dresbach says he has chosen to build his business around a tanker fleet because many of his customers, particularly dairy farmers, don’t own extra cropland next to their farms where the liquid manure could be land applied. That area of the United States in particular has attracted many dairy farmers from the Netherlands who are focused specifically on their dairy operations. Many have purchased 70 acres of land and have established a 2,000-cow dairy on that piece of land, which means that they must negotiate with other landowners to land apply their manure. In this case, a drag hose system would only be part of the solution because liquid manure often needs to be transported several miles away for application, and the farms where it is applied tend to be a collection of several smaller parcels of land. In fact, that is a big part of Dresbach’s business – facilitating a dialogue between the hog or dairy farms and crop growers to arrange for custom application of the manure, which he says can be one of the most challenging parts of his job.

“You have to get all parties on board on timing, rates, and financial contributions from both sides to pay my bill,” says Dresbach.

Dresbach says that his hog producer clients tend to recycle their manure generally on their own cropland as organic fertilizer. Most are contract growers who have attached a hog operation to their corn crop business to add another income stream to their farm. When a situation arises where some of the manure can be transported short distances, W.D. Farms will partner with a colleague who operates a drag hose system.