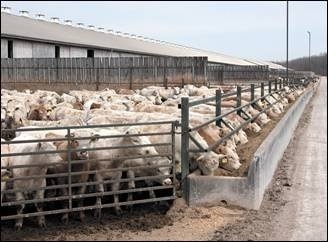 Ithaca, N.Y. – A major study led by Cornell University College of Veterinary Medicine researchers reveals for the first time that water troughs on farms are a conduit for the spread of toxic E. coli in cattle, which can then spread the pathogen to people through bacteria in feces. The study was recently published in the journal PLOS ONE.

“Water troughs appeared in our mathematical model as a place where water can get contaminated and a potential place where we could break the cycle,” said Renata Ivanek, associate professor of epidemiology and the paper’s senior author. The hypothesis was then tested in the field – with surprising results.

People commonly acquire infections from shiga toxin-producing E. coli through cow feces-contaminated beef and salad greens. The main shiga toxin-producing strain, E. coli 0157:H7, causes more than 63,000 illnesses per year and about 20 deaths, according to the Centers for Disease Control. Though cows carry and spread E. coli 0157:H7 when they defecate, the bacteria do not make them sick. For the full story, CLICK HERE.