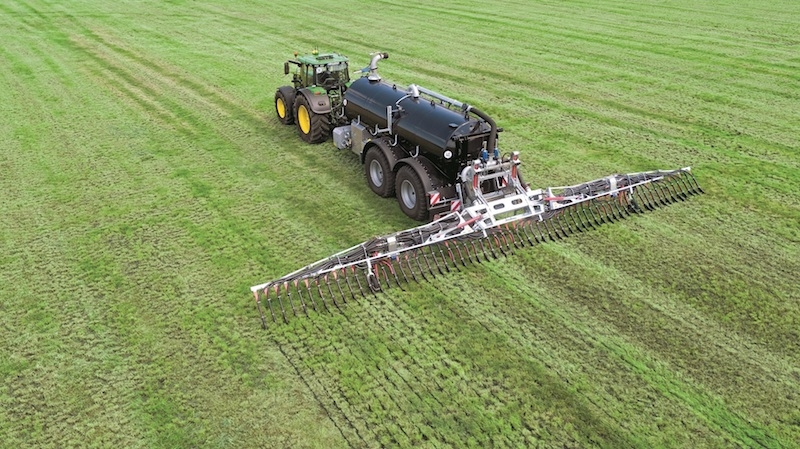 “When it came to developing this new technology, we took into account the findings from our flow simulations as well as the flow rates of the liquid manure and tested a number of different shapes. The result is an ideal combination of a flow-optimized discharge that deposits the liquid manure even more precisely and a new skid geometry that separates the crops even better,” explained Henning Ahlers, head of
sales Germany at Vogelsang.

The new, long, beak-like shape helps to ensure a controlled and even flow of liquid
manure through every discharge, therefore preventing the crops from getting contaminated during manure spreading.

By actively applying pressure, the BlackBird’s pointed skid is able to penetrate the soil, ploughing a small furrow for directly depositing the liquid manure under the crops.

In order to make maintenance of the ExaCut ECQ quicker and easier, Vogelsang has also altered its maintenance concept, adding a large maintenance port to allow direct access to all the system’s internal components. Now, service work can now be carried out without dismantling the precision distributor or dismounting the cover and the outlet hoses and feed lines connected to it.

The power requirements have also been reduced – by up to 50 percent, as a result of new rotor design and lower speeds. There is less strain on the cutting blades because of the reductions in speed and the internal pressure of the distributor, which also extends the service life of the unit by up to 50 percent.

FEM-calculated supporting structures and sturdy leaf springs for longer service life
Vogelsang has also modified the hose layout to prevent the unit from creating a V-shaped imprint at the start of its furrows. The hoses themselves are black and are installed for the first time in the new trailing shoe linkage.

The new leaf springs and their vibration cancellation technology ensure the unit’s stability, protecting the entire structure from excessive loads and reducing vibrations during transport on the road.

Hydraulic cylinders with end-position damping keep the strain in the frame to a minimum during folding processes. As is standard procedure at Vogelsang, the BlackBird’s supporting structures are FEM calculated. This ensures that the supporting structures can withstand the daily strains they are subjected to, thus guaranteeing a long service life of the linkage.

The trailing shoe linkage is available in working widths of 12 and 15 meters and can be folded up to a transport width of 2.99 meters. Folding the linkage upwards activates the DropStop principle, which prevents the headland, streets and agricultural roads from getting contaminated.