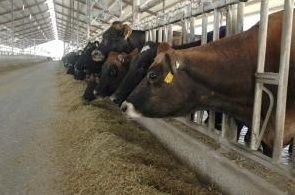 August 17, 2012, Ludlow, VT – A young Vermont woman knows a great way to protect the environment – Cow Power, which has become the subject, and title, of her newest documentary film.

Allison Gillette, 22, first began dabbling in filmmaking in middle school and continued her passion in college. In January, Gillette pitched the idea of a film on cow power, the process that turns cow manure into renewable energy and helped save Vermont’s dairy farms. Her idea was a hit. READ MORE