Nebraska cattle producers involved in the University of
Nebraska-Lincoln Extension Livestock Producer Environmental Assistance
Project all have one thing in common – a desire to make their farms
more sustainable and environmentally friendly.

June 9, 2008, Lincoln, Neb. — Nebraska cattle producers involved in the University of Nebraska -Lincoln Extension Livestock Producer Environmental Assistance Project all have one thing in common – a desire to make their farms more sustainable and environmentally friendly. 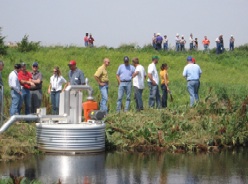 The project, funded by a Nebraska Environmental Trust grant, is designed to help small- and medium-sized cattle and cow-calf producers – those with 1,000 head or fewer, said Chris Henry, UNL biological systems engineer.

"Smaller cattle and cow-calf producers make up 90 percent of producers in Nebraska and often don't have runoff control for their open lots," Henry said. "UNL Extension is leading this effort to develop and demonstrate these solutions."

Fifty-five participants were on the tour with several from surrounding states and as far away as Kentucky. The Nebraska demonstrations are becoming models for similar projects in other states.

Vegetative treatment systems are a substitute for the conventional holding pond. Instead of a pond, producers use an area of perennial grass called a vegetative treatment area that drinks up the water and nutrients in the liquid runoff.

The tour's first stop was a 300-head feedlot just south of Beatrice near Blue Springs, where young producer Doug Ferguson was able to use a vegetative treatment system to return to the farm.

The cost-effective and low-maintenance vegetative treatment system allowed the fifth-generation farmer to relocate an existing feedlot to an area that would control runoff better.

Ferguson said he couldn't imagine doing anything but feeding and raising cattle, and by installing the vegetative treatment system, it made that dream all the easier.

"By Doug moving his feedlot, it allowed him to no longer have a connection to surface water and gave him an environmentally sustainable feedlot," Henry said.

The voluntary, cost-share project not only helps producers construct simple, low-maintenance systems, but many also are very economical, Henry said.

Wes Dorn said he and his brother decided to install the systems because they allowed them to expand for the future.

"We wanted to keep going for the next generation," Dorn said. "Hopefully this will handle regulations in the long-term, and we can be in business for a long time."

The sprinkler vegetative treatment system was developed by UNL Extension and uses a K-Line pod sprinkler system that deposits the liquid runoff on an alfalfa field treatment area.

Dorn not only is able to apply the runoff in an environmentally friendly way with minimal odor, but also gets three cuttings of alfalfa hay per year.

The sprinkler vegetative treatment system is the only of its kind in the U.S.

The last stop featured a cow-calf system, where the vegetative treatment system controls runoff from a feeding area without vegetation.

The farm is a 200-head cow-calf operation near Crete that is owned and operated by Todd Eggerling and Lyle Sittler. The operators converted 40 acres of cropland to grazing area for this operation, and it has an environmentally sustainable feeding area.

The new plan sustains the cow-calf pairs in a four paddock pasture-based system with a central supplemental feeding area, where the vegetation is sacrificed and feeding area runoff managed with a small vegetative treatment system. The vegetative treatment system assures that their feeding area is environmentally friendly while avoiding any regulatory scrutiny from lack of vegetation. This type of system also could complement UNL's Sandhills Calving System.

The new system keeps animals dry and out of muddy conditions, while minimizing disease.

Sittler said the most important thing with a cow-calf operation is healthy animals and this system helps them achieve that.

This also is a one-of-a-kind system in the U.S.

For more information about this or the UNL Extension Livestock Producer Environmental Assistance Project, visit the LPEAP website or contact Henry at (402) 472-6529, chenry1@unl.edu.

Due to the popularity of the tour in recent years, a second tour of the same farms was offered June 5. The tour is paid for through a Nebraska Environmental Trust grant and a Nebraska Department of Environmental Quality Section 319 grant.