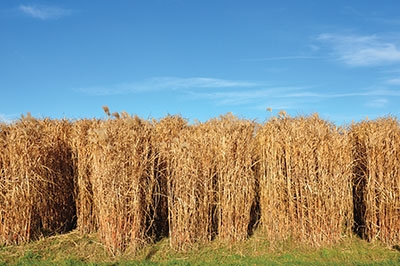 An example of giant miscanthus.

Livestock odors are an ongoing concern for both the livestock producer and the farm’s rural neighbors. In 2008 Larry Jacobson from the University of Minnesota Department of Biosytems and Agriculture Engineering, reported that over 50 percent of ammonia, hydrogen sulfide and odor from mechanically ventilated swine barns were concentrated in the air exhausted via the building’s pit fans. Odor control strategies that focus on the ventilated air from pit fans may significantly reduce odor and other air emissions from the farm as a whole.

Odor control technologies are available but to be widely accepted and implemented on farms, odor reducing practices should meet three criteria:

Because they are relatively inexpensive to plant and almost maintenance free once established, vegetative buffers utilizing trees and bushes are being used by livestock farmers as landscape enhancements and for their potential odor mitigation. This past summer Michigan State University Extension partnered with the Natural Resources and Conservation Service’s (USDA-NRCS) Rose Lake Plant Materials Center and H & H Farms of Vicksburg, Mich., to demonstrate the use of tall warm-season grasses as vegetative buffers to filter dust and odors contained in the ventilated air from swine barn pit fans.

The practice of using tall warm-season grasses as vegetative buffers near livestock facilities, if proven successful in reducing air emissions, offers unique opportunities. Grasses can be grown close to buildings without concern that roots may damage underground services or the manure pit integrity. Though they must regrow each spring, grasses will reach their mature height relatively quickly when compared to slower growing trees or bushes.

The intent of the first year of the demonstration was to determine if warm-season grasses could be established and continue to thrive near the discharge of swine barn pit fans given the constant exposure to dust, ammonia, hydrogen sulfide and other air emissions.

Four species of grass were incorporated in the demonstration plots: Giant Miscanthus, Indiangrass, Switch Grass and Coastal Panic Grass. Weeds were controlled at the planting sites and the vegetative buffers were watered weekly throughout the summer.

Giant Miscanthus and Switch Grass survived the transplanting and had substantial growth in 2013. The other two species, Indiangrass and Costal Panic Grass, either died or had very little vegetative growth.

Future plans for these vegetative buffers include observing next year’s regrowth of Giant Miscanthus and Switch Grass (2014), re-establishing the Indiangrass and Costal Panic Grass (2014), and monitoring the warm-season grasses as an odor-control practice (2015).

Gerald May is with Michigan State University Extension, John Leif is the manager of Rose Lake PMC, and Riley Collins is a student intern with MSU Extension.