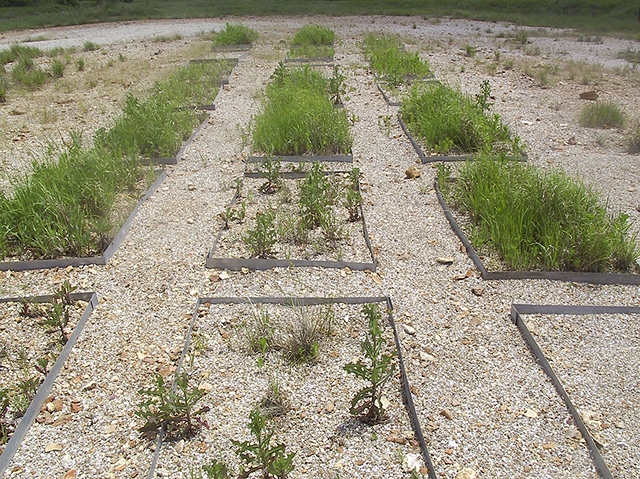 A plot showing varying vegetation that occurred after different levels of beef cattle manure compost amendments. Plant growth suffered when no compost was used but excelled when high amounts were used. USDA-ARS

October 29, 2012 – From 1850 to 1950, the Tri-State Mining District of southwestern Missouri, southeastern Kansas, and northeastern Oklahoma produced 50 percent of the zinc and 10 percent of the lead in the United States. The last active mine closed in 1970, but mining’s ecological legacy remains throughout the region – lead-contaminated acidic soils, toxic smelter sites, large quantities of mine tailings called “chat,” and thousands of acres of land with little or no vegetation.

Paul White, a soil scientist in the ARS Sugarcane Research Unit in Houma, La, was part of a team that studied whether adding beef cattle manure compost to post-mining sites would help jump-start re-vegetation.

“Soil microbes recycle nutrients from soil organic matter, and this nutrient cycling is important for vegetation growth. But there is limited soil organic carbon at these sites,” White says. “So we added carbon to the soil via compost to see if that would get these systems going.”

The scientists also wanted to see whether compost could reduce levels of lead and zinc that could contaminate runoff during heavy rain. High levels of zinc can harm aquatic fauna in surface waters, and lead is linked to a number of serious health conditions in humans. Heavy metals in soils also disrupt the activity of soil microbes by damaging proteins or disrupting cell membranes.

The researchers amended soils in three- by six-foot test plots with either 20 or 120 tons of beef cattle manure compost per acre. No manure was put on control plots. Then they applied switchgrass seed on all of the plots and took soil samples from the plots five times during the two-year study.

Two years after they amended the plots with the compost, White and his colleagues found that soils in the high-compost plots had significant increases in pH, plant-available phosphorus, total nitrogen, carbon, and available water. High-compost amendments also increased microbial biomass, enzyme activity, and nitrification potential, all of which create and support favorable conditions for plant establishment and growth.

“Nitrification potential is a sensitive indicator of stress because nitrifying bacteria are especially sensitive to toxic conditions,” White explains. “Soil microbes also produce the enzymes that convert organic phosphorus into an inorganic form that can be used by plants.”

In this study, the researchers also found that high rates of compost lowered lead and zinc availability by about 90 percent, which may reduce the amount of lead and zinc that could run off and pollute nearby waterways. This reduction occurred because heavy metals generally bind tightly to the organic matter in composted material, which limits their solubility and potential bioavailability in soil. Since high levels of bioavailable zinc inhibit plant growth, this binding action also helps to promote the establishment of a vegetative cover, which in turn can minimize runoff and soil erosion.

Given these findings, White and his partners think that adding composts to contaminated soils could help stabilize postmining sites. “The results strongly suggest that available soil carbon – which we were able to provide with the compost – may be a critical variable in establishing and maintaining a healthy microbial population in soils contaminated by similar mine wastes,” White says.