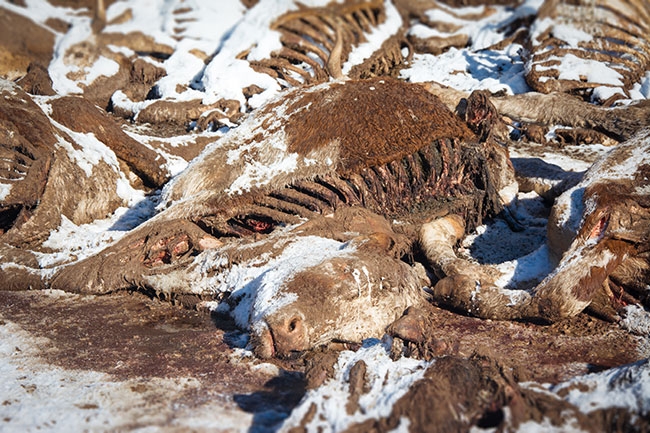 Animal health emergencies occur around the globe each year due, not only to disease, but also to hurricanes, flooding, fire and blizzards. These incidents often require the disposal of numerous animal carcasses, usually accomplished via burial. Photo: Fotolia

Iowa State University researchers have completed testing of a new concept for disposing of animal carcasses following a disease outbreak.

Dr. Koziel and his team focused their research on improving on-farm burial, the method most commonly used for large-scale carcass disposal. Emergency burial can contaminate nearby water resources with chemical and biological pollutants. Buried carcasses also decay slowly, sometimes delaying use of burial sites for years.

To overcome these problems, the researchers studied a hybrid disposal concept conceived in South Korea following a 2011 outbreak of foot-and-mouth disease. The method combines burial with aerobic digestion, a method commonly used for treating sewage in which air is pumped through the content to speed decomposition. The experiment also included burial trenches lined with flexible geomembranes, like those used to prevent seepage from landfills and wastewater treatment ponds. The researchers then injected low levels of air into the trench bottom to accelerate carcass decomposition.

The experiment tested the performance of the aerobic component of the hybrid method in a lab using tanks containing whole chicken carcasses, water, and low levels of oxygen.