Features
Turning up the temp on solids 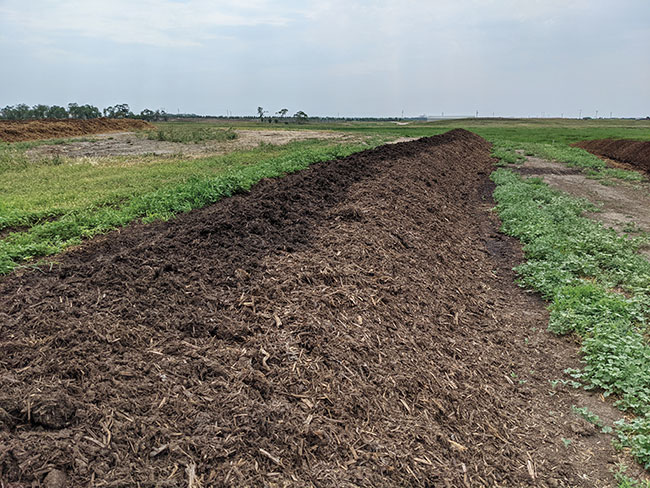 Solid manure, seen here in a Minnesota field, can provide benefit as a fertilizer – but not everything is in place yet. Photo courtesy of Melissa Wilson.

Biochar made from dairy manure may be headed to new markets thanks to an off-gassing infusion of nitrogen from ammonia in the remaining liquids. A 2021 study from Cornell University has found that pyrolyzed (high-heat decomposed) manure solids can be infused with nutrient-rich gases to create a portable, beneficial fertilizer with minimal waste.

Johannes Lehmann, professor of soil fertility management and soil biochemistry at Cornell, worked as a co-author of the study from Soil and Crop Sciences, School of Integrative Plant Science, College of Agriculture and Life Sciences with the university.

“We’ve talked about pyrolyzing manure for a couple of decades, but there’s still a lot of liquids,” he says. “We are taking out the nitrogen from that liquid and we are absorbing it into the biochar solid, so that we have a dry, nitrogen-rich material.”

A gas infusion
The first author of the study, Leilah Krounbi, set out to conduct a simple test after analyzing information on ammonia interactions in manure in New Zealand.

She put pyrolyzed dairy manure solids into tubes and gave them an infusion of off-gases from the bottled remaining manure liquids.

Within only a few minutes, a lightweight, nitrogen-rich fertilizer was created with no pathogens or residues from hormones, medications or antibiotics.

“We drive the ammonia out from the liquid portion of the dairy manure and we are absorbing the nitrogen into the biochar,” Lehmann explains. “Much of it comes out naturally and the rest, we have to increase the pH [to] take it out. The [gas] that comes off the manure is just guided over the biochar.”

He explains that while the experiment was successful, there isn’t yet a way to create this type of product at a commercial level. Krounbi’s experiment shows the potential, but large-scale industrial applications need to be researched.

“Full integration, sort of plug-and-play that recovers both nitrogen and phosphorus and the pyrolyzed manure, that doesn’t exist yet,” says Lehmann.

The resulting liquid, after the off-gassing process, is low in nitrogen and higher in phosphorus, but he says there are already technologies in place that allow for its safe management. 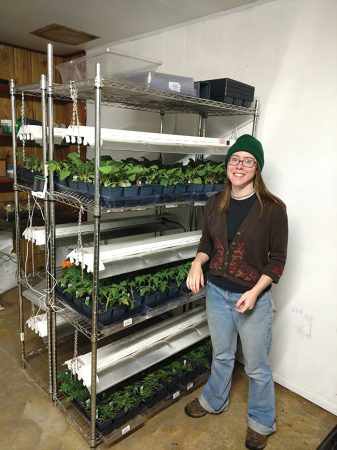 Study co-author Margaret Ball with some of the plants grown using help from the fertilizer.

Pressing and heating starts the process
In order to create this lightweight amendment, most of the liquid needs to be pressed out of the dairy manure, which is then thermochemically converted into a dry solid.

“If you have combined feces with urine, which, in most barns you have… you would need to screw press them,” he explains. “Then you have the solid material that still has some moisture in it and you have a liquid.”

After pressing, the solids have about 50 per cent moisture content. This is then pyrolyzed into dry matter. Pyrolyzation heats the pressed manure solids at temperatures of between 700 and 1,200 degrees Fahrenheit without oxygen. This results in a biochar; a lightweight, compact soil amendment.

At this stage, there is already value in the material. It can be stored and transported easily and is made up of a lot of carbon.

Perhaps best of all, from a gardener’s perspective, the resulting product is odor-free with no methane emissions.

“Charcoal has a lot of carbon in it. And that’s what we’re doing,” he notes. “We’re not charring wood which can also be used as a fuel. Pyrolyzed manure doesn’t burn very well. It’s not very useful as a fuel, but it can be used as a soil amendment.”

Of course, backyard gardeners wouldn’t be the only beneficiaries. Farmers of a wide range of crops and from a wide range of cimates need fertilizer to improve yields and increase plant vigor.

For dairy farmers and the farmers alike, the ability so access a local source of nutrient-rich fertilizer would make operations more efficient and affordable

Many of the nutrients remain within the pyrolyzed manure and are actually in higher concentrations, which is primarily due to the elimination of oxygen, hydrogen and moisture

However, one essential growing nutrient stays with the liquids: nitrogen.

By allowing the gaseous nitrogen to absorb into the biochar, it creates a win-win situation in terms of manure use.

A soil manufacturer local to Cornell sells potting media with the biochar dairy manure in it, proving that there is indeed a market for a lightweight, nutrient-rich amendment beyond on-farm applications for field or forage crops.

“He would love to sell biochar from local dairy manure rather than import Canadian peat or import coconut coir from Malaysia,” says Lehmann.

“It’s a much more sustainable production system with him using local manure.”

Fanning the flames
It may seem unreasonable to find efficient ways to heat manure to such high temperatures, but Lehmann says it’s actually quite common.

Fuel is required to get the process started, but like the charcoal BBQ of years gone by, once the charcoal is lit, the heat is maintained. Similarly, the pressed manure is able to maintain the temperatures efficiently without a constant inflow of fuel.

That said, pyrolyzing manure does require specialized equipment, but it’s certainly not uncommon.

Lehmann describes the equipment to conduct this thermochemical process as something akin to the conveyor-style ovens seen at restaurants – like a Quiznos – where the pressed manure goes in one end, travels along the conveyor through a flameless tunnel and falls out the other end as biochar.

“Most systems for these types of applications are what we call continuous,” he says. “The conveyor guides it through the heat zone and the char drops out on the other end. When it’s being charred in the middle you have to give it a little bit of energy so that it starts charring. Then it runs by itself if the moisture is below 60 or 70 per cent.”

A pyrolyzer is generally custom built to a farm based on the number of cows, layout, manure type, feed type, current manure handling practices and other factors. He says it’s not like a refrigerator when you buy it, plug it in and it’s ready to go, although there are some off-the-shelf options.

“Every operation is different. Some companies offer tailor-made equipment that would come to your farm,” he says. “There are also companies that are offering more or less off-the-shelf equipment. They would offer equipment that are made to suit a certain farm size and you’d buy it like a fridge, only you can’t plug it in without figuring out how you put the manure into that fridge – into that pyrolizer. You need to figure out how you get the manure out from under the cows into the machine and then, when it drops from the other end of the machine, you need to get it onto a truck, so you still need to integrate it into the farm’s management.”

Why all the transportation talk?
Transportation is – and always has been – a key issue with animal waste. Wet manure is valued for its nutrient profile, but the cost of transportation sets the inherent value.

Now, with fuel prices ever-increasing and dairy manure requiring specific conveyance, it can quickly turn a valuable resource into a disposal issue.

“If you’re transporting it more than about 15 miles, then the nutrient value in that truckload is lower than the transportation costs,” Lehmann says.

“In other words, you can not transport manure very far before it costs more. You could have just used fertilizer and that would have been cheaper.”

In an ideal world, all manure could be evenly distributed across the farms from which it comes. But the economic reality is that few dairy farmers have the luxury of forage and crop fields that take up the entirety of their manure.

A future where garden centres are able to make use of a nitrogen-infused pyrolyzed manure as an amendment could potentially give farmers a market where the animal waste is appreciated – and in demand.

“There [is] a significant, relevant number of farmers that are leasing or keeping land just for the disposal of their dairy manure. They need a certain acreage just as a disposal mechanism,” notes Lehmann.

“However, if you’re making a product out of it, then that is valuable enough to be shipped like a fertilizer. [And] we know that fertilizers are shipped all over the world… so it is possible.” •