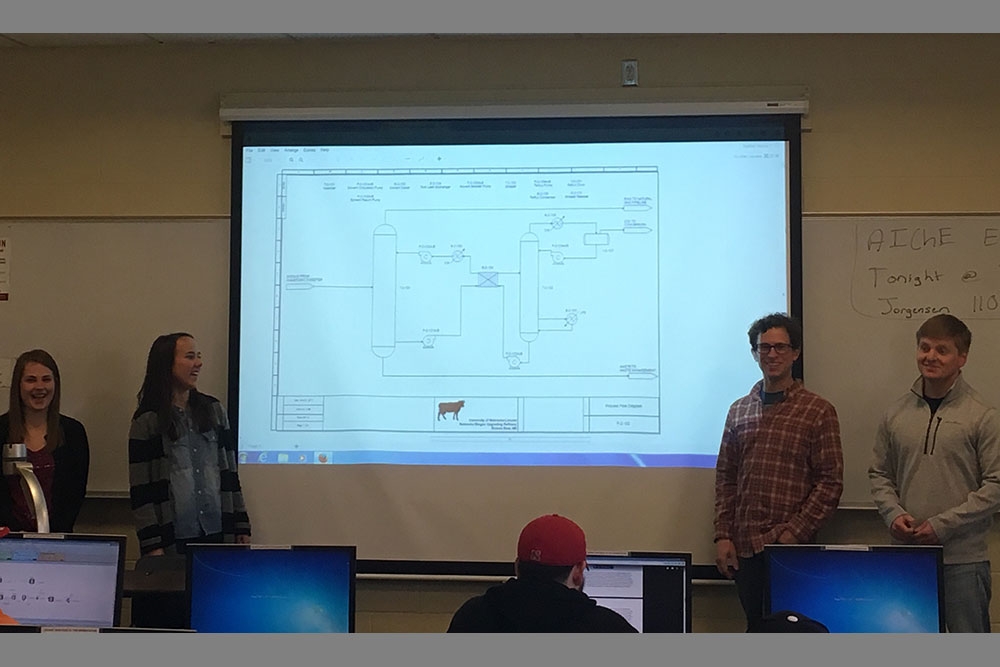 April 25, 2017, Lincoln, NE – For a team of University of Nebraska-Lincoln chemical and biomolecular engineering students, biogas refining isn’t just a senior design capstone project, it’s a potential means of supplying Nebraska’s rural communities with a renewable source of energy that comes from resources that are both local and plentiful.

Tasked with helping Nebraska Public Power District (NPPD) turn biogas into a more-refined form of natural gas, the team of Meryl Bloomfield, Heather Newell, K.J. Hafer and Dave Hansen saw that the state was among the nation’s leaders in not only cattle population but in manure production.

Using an anaerobic digestion process, the team proposes turning that manure not only into fertilizer for crops but natural gas that NPPD could also use to create electricity that powers farms and rural communities across the state.

“Compared to other renewable energy sources – like wind and solar – biogas is more consistent,” said Bloomfield. “Cows are always going to produce manure. You don’t have to rely on having a sunny day or a windy day, especially In Nebraska, where wind and solar plants might not be as reliable as in Arizona and California.”

According to The Cattle Network, Nebraska ranked second nationally in 2015 with approximately 6.3 million cattle or about seven percent of the U.S. population. One of the biggest uses of the manure produced by the cattle is the production of fertilizer.

The student team worked to develop a method that would allow the production of natural gas and still maintain a viable supply for fertilizer production. But that led to it expanding on its goal by proposing a solution that could be an economic boost to the rural community – a biogas upgrade refinery that would be strategically located near Broken Bow.

The refined natural gas from the Nebraska Biogas Upgrading Refinery would then be piped to NPPD’s Canaday Station southeast of Lexington, where it could be used to create electricity.

“It would be centralized to where the cows are,” Hansen said. “After designing the plant, we determined we’d need about a quarter of a million head of cattle to achieve the manure supply sufficient to reach the capacity NPPD is looking for.

The natural gas that would be similar to the gas used in homes across the country, Hansen said, except it would be collected as part of a natural process rather than relying on traditional means of extracting the gas – such as fracking or refining fossil fuels.

Newell also said the process would be more beneficial to the ecology.

“In doing this, we’re reducing greenhouse gases from the cow manure that sits out and naturally becomes fertilizer,” Newell said. “We’re reducing the carbon dioxide and creating something useful from it.”

Though their proposal isn’t guaranteed to be implemented, Bloomfield said thinking about the human impact made this senior capstone experience valuable for the entire team.

“Knowing that it could be even a stepping stone to something for NPPD changed how we approached it,” Bloomfield said. “When you’re thinking theoretically, you can go a lot of different directions. When you’re thinking about how it affects people and their lives, that’s when it gets real.”