Hydrogen sulfide is
one of the compounds contributing to the stink from manure storage pits
on hog farms. Microbial activity in the manure releases the hydrogen
sulfide and other compounds.

June 3, 2008 – Hydrogen sulfide is one of the compounds contributing to the stink from manure storage pits on hog farms. Microbial activity in the manure releases the hydrogen sulfide and other compounds. 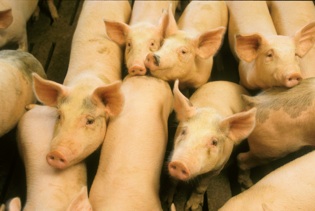 At a recent meeting of the American Society of Microbiology , held in Boston, Mass., Agricultural Research Service (ARS) scientist Cheryl Spence reports the results of a study in which “dusting” hog manure with borax powder – the same substance used in laundry detergents – helps to neutralize the malodorous microbes, which include sulfate-reducing (SR) and other anaerobic bacteria.

Besides smelling foul, the hydrogen sulfides, ammonia and other gases emitted by stored hog waste can diminish air quality. The disagreeable odors can also lead to tension between livestock producers and their neighbors.

For the study, the ARS-MSU team treated manure pits beneath swine nursery rooms with a powder containing either one or two percent borax once a week for six weeks. Other swine nursery rooms were left untreated so the team could compare gas emissions and indoor air quality.

Using molecular genetics tools, the team measured the treatment’s effects on the manure’s resident SR bacterial population, which produces hydrogen sulfide. This was possible, thanks to the technology’s ability to detect and quantitate a particular gene that distinguished these bacteria from other manure-loving microbes.

The team’s analyses of bacteria and air showed the borax treatments reduced SR populations by 99 percent after the first week, and hydrogen sulfide levels by 80 percent after six weeks.

Borax offers a promising addition to the ”bag of tools” researchers are evaluating for manure-odor management because the mineral is naturally occurring, fairly safe to handle, and readily available, notes Spence, with NCAUR’s Fermentation Biotechnology Research Unit .