Güres Group, based in Turkey, uses a Turboden ORC turbine to transform 500-tons of poultry litter a day into clean energy. 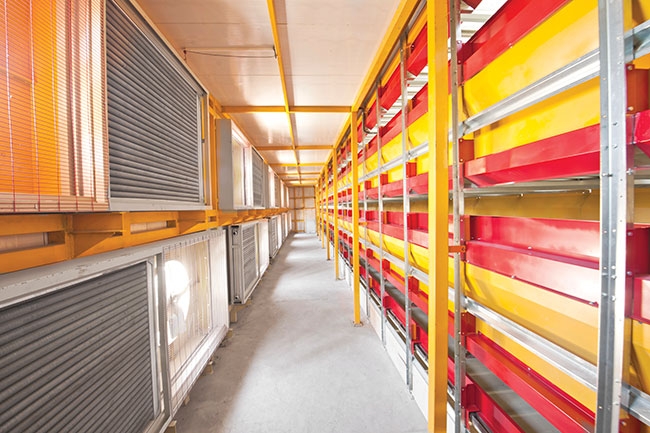 The Güres Group has developed a new-generation manure dryer to run with a low-temperature heat source, such as 70-degree water. Contributed photos

The Güres Group, a poultry farm in Manisa, Turkey, has been experiencing a growth spurt for over five decades. Ahmet Remzi Güres, one of the founder deputies of the Republic of Turkey, started out with only 600 hens in 1963. Today, the farm produces one billion eggs a year.
That’s right. One billion. According to the company, that comes to three million eggs per day. Today the operation covers 700,000 square meters (7.5 million-square feet) with a closed area of 250,000-square meters (2.7 million-square feet) housing four million laying hens in 35 henhouses and employs 700 people. Even after the tremendous transformation, it’s still a family business, run by Ahmet’s sons.

The growth and transformation of the business took place in stages. The company added feed facilities in 1985, feeding their own poultry and selling their feed to other farms. In 1989, Güres built organic fertiliazer plants to manage, and profit from, the waste collecting from the growing number of hens.

Following the organic fertilizer plants, Güres built a breeding and hatchery plant in 1997, supplying themselves and others with hens and chicks. Next, in 2000, it expanded by building a cage production plant and then, two years later, built an egg tray factory. As recently as 2012, the Güres Group built both a pasteurized liquid egg plant, and a quail egg production plant.

Managing 500 tons of litter a day
Along with growth comes challenges, specifically how to handle the litter. Currently the farm produces 500 tons of poultry litter per day. The chicken litter was historically collected on polyurethane conveyor belts underneath the chickens, conveying the waste to anaerobic fermentation reactors where the manure was to be converted to organic fertilizer. After a few days the moisture content would drop 35 percent and the litter was then transported by truck to a fertilizer manufacturing facility where a coal-fired boiler fueled a rotary drier to reduce the moisture to 20 to 25 percent for pelleting.

Once the pellets were sanitized at 80 degrees Celsius for an hour, and cooled, they were ready for packaging. The system, although effective, took a great deal of time, energy and manpower to produce the organic fertilizer.

The Güres Group thoroughly researched other, more cost-effective methods of manure management. After five years of research and development (R&D) they had their answer — a new system that included a Turboden Organic Rankine Cycle (ORC) generator.

Turboden is an Italian firm and a European leader in the design and production of ORC systems. Since 2013, it’s been a part of Mitsubishi Heavy Industries. The company came with a great deal of experience, having built more than 355 plants in 38 countries.

Turboden’s technology works by producing hot gases, and the heat contained in the gases is transferred to the ORC system by using a closed thermal oil loop. The ORC system is used in place of water and transforms the input heat into electrical power.

The new process
The Güres Group says today the litter is collected from the hen houses every two days, through specially designed manure conveyors produced by Güres Technology, an offshoot of the Güres Group and founded in 2000. These conveyors take manure to 10 new fertilizer drying systems, also manufactured by Güres Technology. The technology dries 54 tons of manure in 24 hours. After the manure is dried, manure conveyors take the manure to the energy facility for burning.

The Güres Group has a lot of experience in drying litter and they have learned that “especially layer manure” requires pre-drying for optimum combustion efficiency. For that reason, the company developed a new-generation manure dryer to run with a low-temperature heat source, such as 70-degree water.

The dryer can dry any manure from 75 percent moisture content to 25 percent in 24 hours, exclusively with a low-temperature heat source, which comes from the wastewater heat from the ORC.

This system means the company does not have to store wet litter and Güres tries to avoid stocking wet manure for a variety of reasons — odor, biosecurity risks, and if transported on a truck, it can lose its particle structure. Once the structure is compromised it takes more time and energy to dry.

Energy facility
The energy facility that houses the ORC is 1,800-square meters (19,375-square feet). The company says that the design is actually three separate systems that feed into each other — a manure drying system, a manure combustion system and the electricity producing ORC system. The ORC and combustion systems work together and are connected by thermal oil pipes. And, the ORC’s hot wastewater is connected by pipes to the manure dryers.

The dried manure is then transferred to the manure combustion system used to generate the heat to run the Turboden ORC turbine. The byproduct of the combustion system is ash, which is then used in the manufacturing of an organomineral fertilizer to aid in soil development.

In short, the ORC has two main tasks, says the company — to transform the heat generated by the combustion into electrical power, and collect the excess heat after the ORC turbine in a water-cooled condenser to generate 70-degree water that will feed the dryer system.

The challenges
Making a change of this scale is complex and full of challenges. The company says that the combustion system was, however, the most challenging aspect of this whole three-in-one cogeneration design. The reason was that when chicken litter burns, it burns extremely hot and corrosively. Güres needed to design a system that would include a secondary airflow to minimize the effects of the corrosion caused by the high temperatures.

The Güres Group has developed a new-generation manure dryer to run with a low-temperature heat source, such as 70-degree water.

Up and running
Construction was completed in September. In October, the team tested the system — transferred the first litter into the system, burning it and producing electricity. If the test run goes as planned, the company expected to be running at normal to full capacity by the end of October. The facility will run approximately 20 hours a day, with 12 people monitoring it over three shifts.

If running well, the system will generate 12 megawatts per hour (MWh) of energy to heat the oil within the ORC generator’s closed system to 300 degrees Celsius, enough to create the steam, which will turn the turbine, generating 2.3 MWh of electricity. The electricity produced will then be sold to the grid, by Güres, at a special feed-in tariff specific for bioenergy. The company gets a special rate because the energy was created by biomass and because the technology was manufactured in Turkey. Although the company is not releasing the cost of the project, once it is fully functional, the Güres Group expects to see a return on their investment in five-to-six years.

The system isn’t just for chicken litter. Gürus Group says it’s an ideal system for large farms, but also, because of its compact design, it’s feasible for medium-sized and possibly even smaller farms. In fact, if successful, the company sees systems similar to this being used throughout many countries.

The future looks bright not only for the farm and its new ORC system. The company has been a leader in turnkey cage projects, and now, with the launch of this project, the company will be selling its new, innovative manure drying system. The first was sold to South Korea and has just been installed.