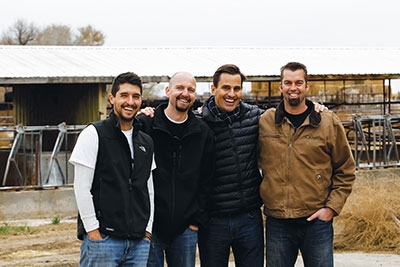 When the recession hit, some farmers went down for the count. Others, like Glenn Vander Woude and his two partners, got back up, produced a new product and created a national buzz.

Glenn Vander Woude tells people that as a ninth-generation dairy farmer, he’s genetically pre-dispositioned to be in the dairy business. Glenn worked on his dad’s dairy through the 1980s and then his uncle’s dairy after he graduated from college with an ag business degree.

He and his wife worked hard, saved their money and in 1999 were able to start their own farm outside Nampa, Idaho. It was a humble beginning, milking just 47 cows. “I still have a framed copy of my first milk check for $400,” says Glenn.

The farm grew, and by 2008 the couple were milking 300 cows and farming about 300 acres where they grew alfalfa, corn, and small grains — both barley and wheat. They purchased another piece of farmland about 20 miles away because of the encroaching development. They had gotten their dairy permit on the new place, and were ready to sell the original farm, when it happened. The recession hit.

“That changed everything,” says Glenn. “We had plans, but economics dictated otherwise.”

A new plan
The couple tried to stay in the dairy business, but it didn’t look good, and Glenn was facing unemployment. One possibility presented itself. Composting.

Glenn had always been an advocate and studied composting in college. “For twelve years we had been composting our manure just because I felt it was better to spread compost on farm ground, especially rented ground, versus raw manure. You have less odor and it’s a really good way to control your nutrients and to get more consistency in what you’re land applying.”

Glenn says now that many farmers are using nutrient management plans, and compost allows you to “kind of dial it in a little bit better than raw manure.”

In February 2013, Glenn and his wife sold the cows. What remained were tons of compost and manure . . . and a new dream.

New business venture
As the dairy side came to a close, a new venture presented itself.

Glenn, his brother-in-law, Scott Hartog, and his cousin-in-law, Ben Bieri, could visualize a new business that all three could be involved in — selling the compost at a retail level. In short, they would take the composted manure, screen it, bag it and sell it. They would call their product Poop – Natural Dairy Compost.

The three men, who are all in their 30s, put their energy and skills to the test. Glenn continued composting. “I’ve got a whole composting yard where we put all the manure into windrows, about 4- or 5-feet high by about 10-feet wide, and then compost it all down. Next, we bring it in. We’re using my old hay barn to screen and bag.”

They needed a product that was a little more refined than what you spread on a field. So, they had a 1/8-inch screener, custom built by Frank’s Welding.

“It lets us get an odorless compost that has a nice, fine consistency like coffee grounds,” says Glenn. That consistency makes it easy for customers to spread with hand-operated compost spreaders.

“We’re doing everything very economically, taking what we already have and modifying it to make it work,” says Glenn. And that includes not only the three guys providing all the manual labor, but also applying their mental skills. Glenn is the compost guru. Ben, a managing partner of Slyngshot Marketing Strategies, handles the marketing, and Scott, an HR manager for Wells Fargo, is in charge of logistics.

“Scott helped us form the corporation. He’s the one who takes care of all the paperwork and keeps Ben and I organized,” says Glenn.

Supply
The men can already see a number of challenges ahead of them, but they are ready to take them on.

First, Glenn admits, he doesn’t have an unlimited supply of manure or compost at the farm. The current supply is helping keep costs low while the business grows, but at some point they will have to go elsewhere. Glenn’s not too worried though. “We have contacts within the dairy industry if our composting business does take off.”

They also need to make sure they have capacity, although that won’t be a problem for a while. “With our current system, if we had full-time labor — not just me and my partners part time — our maximum capacity would probably be 3,000 pallets annually,” explains Glenn. Each pallet holds 40 cubit foot bags of compost, but Glenn says they aren’t close to reaching that yet.

Right now, Poop is just taking hold in the Treasure Valley region near Boise. “We’re hoping to get some more retail locations and are meeting now with larger retailers. We don’t want explosive growth — just sustainable,” he says.

Competition and Super Bowls
The partners haven’t relied on just word of mouth about their Poop. They recently went after a highly coveted and competitive Super Bowl ad.

Intuit held its first Super Bowl ad competition last football season. Companies could submit a 90-second video to explain why their company should be considered for a Super Bowl ad. Glenn and his partners jumped at the opportunity.

The men created a humorous clip, where the partners and their children talked about how important it was to “Poop your plants.”  (Say it out loud if you don’t immediately get the humor.)

Almost 15,000 businesses submitted videos and Glenn and his team came in second. Just getting that far provided them some local notoriety, but there was more to come. Intuit produced a commercial for the men that aired on Fox Sports 1 for a number of weeks. (You can see the commercial on their website
www.dairypoop.com and even pick up a Poop cap while you’re there.)

The team also received an all-expenses paid trip to New York City for the Super Bowl weekend. “All three of us went and took our wives,” says Glenn. “We had a blast. I’m pretty sure we stuck out like sore thumbs — a bunch of hicks from Idaho out in the Big Apple.”

New business challenges
Currently all three men have full-time jobs, with Glenn working as a sales representative for Lallemand, which sells animal nutrition and inoculation products. Because of that, direct sales aren’t an option and their focus is almost solely on retail, the biggest challenge — even with the Intuit success — is now penetrating the market and getting customers to choose their product over others.

Glenn says the bags of compost sell for $7.49 and their target is urban gardeners who would use Poop for raised beds and lawn applications. To set Poop apart from other fertilizers, they have gone after the niche they call “fully composted manure.”

“We’re not adding peat moss, sawdust, or any fillers,” says Glenn. “The selling points on the compost [are] that you’ve got nutrients that are readily available for your plants whether you’re using it as a lawn application or a garden application. And you’ve got a slow release of the nutrients. A lot of your chemically manufactured fertilizers will have a quick response, and then you’ll have to re-fertilize later. With our compost you get a slow release of those nutrients throughout the growing season. Lastly, it really helps on water retention so that you’ll be able to use less water.”

Another challenge for the guys is adjusting to the fact that fertilizers are a seasonal product. They have already seen a bump in sales in the spring and fall. And they are seeing higher sales this year than last.

“A retailer actually tripled their order from their initial offering last August. So that was very helpful,” says Glenn.

Distribution and getting the product to stores is also difficult for a new company that is only run by three part-time guys. “Right now we’ve been taking it to the retailers. Just to their distribution hub, and then from there, they’ll take it out to their individual stores,” says Glenn.

The team is looking forward to larger sales that will in turn help bring their costs down and allow them to ship Poop out further to more customers.

Getting kids through college
Right now the three men are putting in a lot of sweat equity. “We spend eight to ten hours every Saturday doing the direct labor. Indirect labor, as far as talking about ideas and figuring out different things with marketing, I don’t know how much time we spend. We’re kind of always thinking about it,” says Glenn.

The three partners have 11 children between them. “And our main objective when we started this thing back at the end of 2012 was to make enough money on this to cover the tuition costs for our kids,” says Glenn.

Will Poop get them all college degrees? If it’s based on their dads’ determination, creativity and not letting a thing like a recession stand in their way, then the answer is definitely: yes!