A new technology is being used in Canada to improve cleaning of livestock transport trucks and aid the reduction of biosecurity risks. 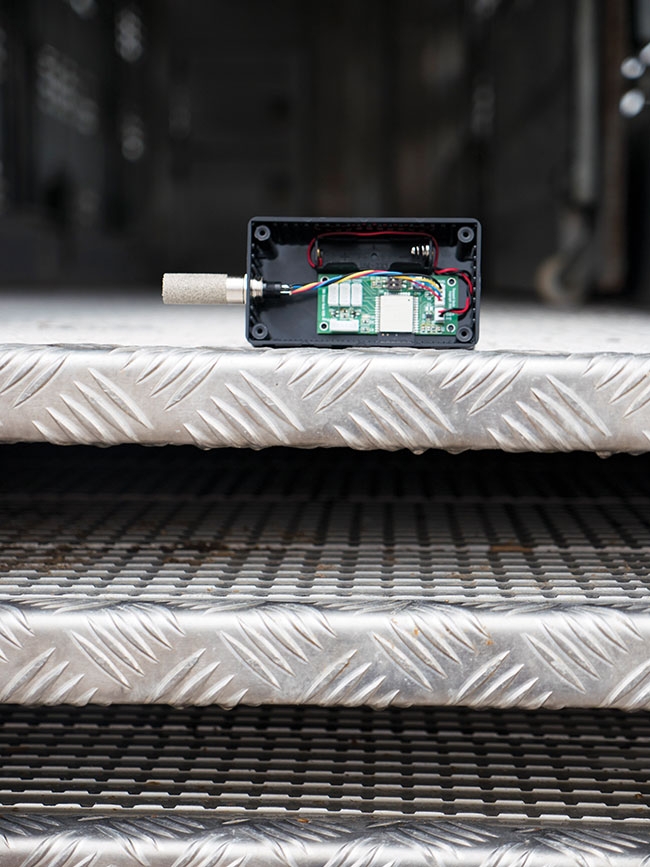 The Transport Genie is a patented real-time sensing system that was launched by the Ontario-based creators of Be Seen, Be Safe, a geo-fencing biosecurity app. Photos courtesy of Mark Beaven, executive director of the Canadian Animal Health Coalition

A new Canadian technology may be an asset to producers in improving livestock transport truck disinfection, according to Mark Beaven, executive director at the Canadian Animal Health Coalition (CAHC), a non-profit organization that works on livestock health and welfare solutions.

The new tech, named Transport Genie (TG), is a patented real-time sensing system that was launched by the Ontario-based creators of Be Seen, Be Safe, a geo-fencing biosecurity app.

TG consists of sensors placed in the trailer that continually relate data on the trailer environment (i.e., humidity and temperature) to the driver of the transport truck, and also livestock transport fleet managers if desired. With this real-time data, transport firms can ensure a high level of welfare to the animals being hauled. Data from transport can be tracked over time.

The system has already been presented at various pork, poultry and cattle industry meetings, and is now being readied for commercial launch. Joel Sotomayor, TG president and CEO, reports that starting in May, TG and CAHC will be doing trials with Luckhart Transport, a livestock hauler, in Ontario. Luckhart showed early interest in TG, both for gathering data on how its trailers are working, but also for proper disinfection.

Another trial partner is Terry Fonstad, an associate professor in the department of civil, geological and environmental engineering at the University of Saskatchewan.

“When PEDv was first identified in Canada about four to five years ago, livestock transport trucks were pinpointed as the likely vector for transfer,” Fonstad explains. “It reportedly cost around $600 to $800 to clean a truck. It’s a lot of hot water and labour. They generally use a fire hose to remove dirty bedding, then pressure wash, then do removal of biofilm with soapy water and rinse again. Then it may take three or four hours of drying at 45 degrees Celsius.”

“We conducted testing a couple of years ago at VIDO-InterVac (Vaccine and Infectious Disease Organization-International Vaccine Centre, at the University of Saskatchewan) and determined that none of the pathogens tested survive high temperatures,” Fonstad notes. “PEDv was most heat-resistant, but we found that 75 degrees C for 15 minutes killed it in the lab. This was announced at a meeting with trailer cleaning company owners, and they immediately got on their phones and told their managers to turn the dryer temperatures up. It was the fastest announcement of a scientific finding getting out to industry that I’ve ever seen.”

However, there was, and is, still work to be done to see if there are areas of the trailers that are not being exposed to the required temperature.

“We looked at making a sensor system to give us this information and found out that TG was already developing sensors for animal comfort during transport, so we partnered with them,” Fonstad says. “We are working with them to add capabilities to the temperature sensors, expanding them to measure beyond the range of temperatures that are measured by TG for animal welfare purposes.”

The trials with the TG system may show that trailers will have to be baked longer or that the heat distribution in the drying ovens may have to change, using duct work, for example, to focus the heat in a certain area.

“The sensors have to be present and working every time,” Fonstad notes. “The cleaning is done by custom cleaning companies and they need verification that cleaning took place (through GPS sensors) and that it was properly done (through TG sensors). It’s easy to get blamed for a biosecurity breach that happened somewhere else in the chain. So, we need the sensors to be designed so that microbes aren’t retained but also designed so that they can tolerate many washings and the temperature extremes. Changing trailing design may also help.”

John Neufeld, Manitoba Agriculture spokesperson, says more research is needed to fully understand which pathogens and diseases exist in lagoons, regardless of the type of manure.

“There is also a knowledge gap on how long these pathogens like PEDv or Salmonella can survive in the lagoon, and how or if they may be transferred when manure is applied,” he says. “There are many factors which can influence whether or not a pathogen can be transferred from the lagoon during application to a field, which could include the type of application, the field type (tilled or forage, for example), the weather at the time of application, and biosecurity practices. If good biosecurity practices are in place and proper steps are taken, the ability for manure to be a source of disease to a herd or flock is greatly diminished.”

Neufeld notes that there is no proven way to disinfect a manure lagoon to eradicate PEDv or any other pathogen, but he says, “there are many effective and proven methods for cleaning and disinfecting premises that have been infected with PEDv. New methods and disinfectants may arise over time, but the principles of thorough cleaning before applying disinfectants and providing enough time for disinfectants to work properly remain constant. Following established biosecurity practices that meet or exceed the national swine biosecurity standards remains the best approach to prevent the spread of highly-contagious pathogens like PEDv.”