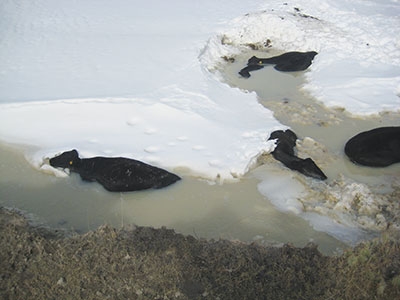 Winter Storm Atlas killed about 100 cattle from Marvin and Kathy Jobgen’s herd, located near Scenic, SD. “I’ve never lost a mature cow in a snowstorm in my life and to lose that many cows in that short of a period of time was a shock,” said Marvin.

It is now known as Winter Storm Atlas, and while it only lasted about 13 hours, its walloping impact will be felt for years to come.

Atlas whipped up its frenzy in October 2013, dumping as much as 55 inches of snow on much of South Dakota, with lots of preceding rain and winds at some points of over 60 miles per hour. The storm also touched areas of North Dakota, Nebraska and Wyoming. Afterward, no less than nine tornadoes hit northeastern Nebraska and northwest Iowa, adding to the emergency response burden.

Marvin and Kathy Jobgen’s herd near Scenic, SD, was one of many cut down by Atlas. “We have about 300 head usually, but the storm killed about 100 cows,” Marvin explains. “The cattle were on summer rangelands and hadn’t put on winter hair. The predictions were for 7 to 10 inches of snow and our area got over 30, so we were not as ready as we could have been. I’ve never lost a mature cow in a snowstorm in my life and to lose that many cows in that short of a period of time was a shock.”

The conditions Marvin refers to are only part of what created Atlas. It was, as they say, a perfect storm. A number of powerful factors all came together simultaneously to create a critical situation for cattle and other livestock, one that led to widespread physiological stress, hypothermia and death. First of all, as Marvin says, at the time of the event, livestock were still in summer coats and experiencing mild weather.

Secondly, the snowstorm was preceded by hours and hours of rain. “Wet hair has reduced insulating properties and increases body heat loss,” notes Dr. Dustin Oedekoven, South Dakota’s State veterinarian and executive secretary of the South Dakota Animal Industry Board. “In addition, the strong winds further chilled the animals, and of course, much of the livestock hit by the storm were out on open range and experienced the full brunt of the elements.”

A further factor was feed quality. The grass the cattle, sheep and other livestock were feeding on at the time of the storm last fall was energy-poor due to the weather conditions the month before. Unusually large amounts of rain fell in September, which led to rapidly growing grass in many areas of South Dakota and beyond, and this type of grass is very high in moisture and quite low in energy. Under normal conditions, not such a big deal – but leading up to and during a chilling rainstorm and blizzard, it was a serious contributing factor.

Lastly, during the storm, animals tried to seek shelter, and this walking for hours through ever-deepening snow further boosted their energy losses. And because they could not see for the snow, some of them fell to their deaths in gullies. Others got caught in slushy creeks, or were crushed by other animals against fences and so on.

Estimates of how many cattle died vary from 40,000 to 60,000. At this point, Oedekoven and his colleagues have verified the Atlas storm deaths of 21,980 cattle, 1,382 sheep, 299 horses and 40 bison. The storm killed calves that were due to be sold around that point in time, as well as cows that would give birth to this year’s calves, so the repercussions will be felt for some time to come.

In this one event, ranchers lost several million dollars and many did not have insurance relating to this sort of incident. However, they are applying for some financial loss assistance through the U.S. Department of Agriculture’s Farm Service Agency.

Cleaning up
Although it was devastating and shocking, both ranchers and county crews mobilized right away after the storm. The ensuing carcass cleanup was very fast, says Sylvia Christen, rancher and executive director at South Dakota Stock Growers Association, which represents about 1,500 ranchers. Most carcasses were buried, Christen says, a quick disposal method that was the most efficient option, with a few being composted.

In terms of where to bury the livestock, solid guidelines were already in place. “During the Atlas storm response, my staff and I worked with producers, veterinarians, county emergency managers, and others to advise them on proper carcass disposal procedures,” Oedekoven explains. “Of most help was the state ‘Carcass Disposal Guidelines’ document that was published in 2011.” The South Dakota Geological Survey Program was also used as a resource to help government crews and ranchers select burial location. It provides mapping with soil types as well as aquifer and hydrology information (http://www.sdgs.usd.edu).

“These animals died of natural causes rather than disease,” Oedekoven notes, “so there were no direct pathogen threats to be concerned with. However, timely and proper carcass disposal is an important aspect of disease prevention, as it removes potentially contaminated carcasses from the environment where they may serve as a reservoir of disease.”

The state Carcass Disposal Guidelines of 2011 contains common sense advice. Burial should not take place within 1,000 feet of surface water or within the boundaries of a floodplain, river or wetland. They should also not occur within 1,000 feet of an occupied dwelling (without permission of the owner), within 1,000 feet of any private or public drinking water well or within 200 feet of a road right-of-way or property boundary (again, without the permission of the adjacent property owner). “Ranchers and government crews also made strong efforts to abide by the guidelines in terms of not burying carcasses where the primary subsurface material 20 feet below the bottom of the burial trench is primarily sand or gravel,” Oedekoven says.

In terms of depth, where an aquifer is less than 20 feet from the bottom of the burial trench, the burial site should be covered with at least four feet of soil to allow for compaction of soil to occur. The burial sites are also supposed to be able to be accessed in varying climate conditions, aesthetically acceptable and not in close proximity to public roadways or viewing public. The Guide advises that ranchers must keep an eye on burial sites, because maintenance will be necessary to ensure water does not collect over them. Additional soil cover will also be needed as compaction occurs with carcass decay.

The Jobgens buried some of their carcasses, and county crews disposed of their cattle that had perished near county roads (by burial as well.) Some of the carcasses were inaccessible in ravines and so on, Marvin adds, and have stayed where death occurred for scavengers to feast on.

“The industry did quite a job in mobilizing carcass disposal for the severity of the impact,” Marvin observes. “It was not a typical situation and we were all charting new waters, but I think everyone did a fine job of doing what had to be done.” Kathy adds, “We will put one foot in front of the other and continue forward to rebuild our herd. We both love the ranching life!”

Oedekoven agrees that this was an extremely challenging time for affected ranchers. “Through all the turmoil, it was encouraging to see neighbors helping each other out to do their best to take care of surviving livestock, dispose of the carcasses and move on with the business of ranching,” he notes. “Pasture conditions are good this spring, and cattle prices remain at all-time highs.  Ranchers are a resilient bunch and with a little luck, most of those affected will be back on their feet soon.”