Features
The best storage solutions for you

The options are plentiful, but what’s the way to go for a modern farmer? 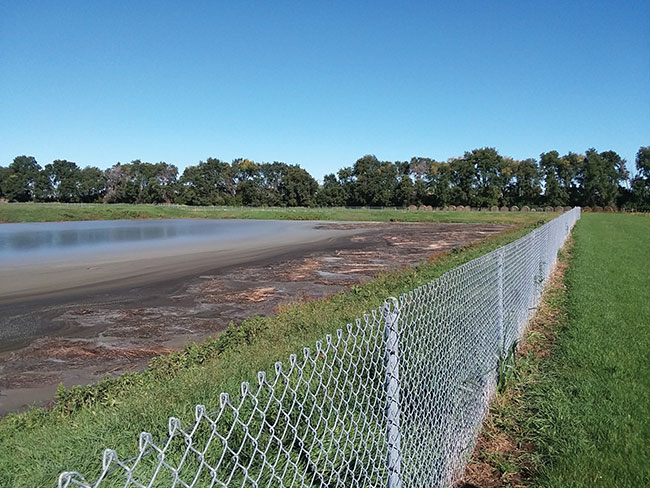 Open-air manure ponds and lagoons are one way to go when it comes to manure storage. Photo courtesy of Erin Cortus.

It’s a fact of life on every livestock farm – along with milk, wool, eggs or meat – that animals produce manure, and lots of it. More animals housed in one location means the amount of manure produced grows, therefore storing manure until it can be spread on fields or hauled away becomes a significant concern.

Farmers have several options when it comes to capturing manure and washwater to prevent nutrient loss and environmental degradation through runoff. Systems that manage liquid manure or slurry – which moves with the help of gravity, pumps and pipes – differ from those that handle solid manure.

“There are pros and cons to any type of system,” says Erin Cortus, an extension engineer at the University of Minnesota who works with livestock production systems. “It’s a question of ‘do we want to handle the manure mechanically or hydraulically?’”

On small farms, manure can be stockpiled under a tarp or three-sided structure, or composted with straw and organic waste until it is spread on the fields or hauled away. But with the consolidation and expansion of livestock operations in recent decades, large-scale manure storage systems – such as deep pits under barns, open-air holding ponds and lagoons – have become more common, making the storage of massive quantities of manure a significant concern for farm operators.

Pits versus lagoons
Outdoor manure pits and lagoons may look similar from the air, but where they differ is what is happening under the surface. Pits – also known as holding ponds when filled with liquid manure or feedlots when stocked with solids – are meant solely for long-term storage, while manure inside a lagoon undergoes anaerobic respiration as microbes break down organic material.

Lagoons are most often found in southern states because the bacteria that break down manure cannot survive the cold northern climate. Farmers who use lagoons must take care not to overload them with too much manure and risk microbial system collapse.

“You’re essentially managing microbes,” Cortus explained. “You have to keep those microbes happy. If you overwhelm them with too fast of a feeding rate, they’re not going to digest the organic material and you’re going back to more of a storage system.”

As a result, she added, a lagoon’s storage capacity “is a lot less (than a manure pit) for the same amount of area.”

Due to geographical limitations and regulatory trends, holding ponds for liquid runoff are much more common than lagoons, says Justin Bonnema, a South Dakota-based agricultural engineer with the USDA’s Natural Resources Conservation Service.

Bonnema visits operations and gives technical advice to livestock operators about how to manage the waste products their farms produce.

“Far and away what we do the most is the holding pond,” he says.

Most holding ponds are made of earthen materials and lined with clay. Some have concrete bottoms or synthetic liners, with the occasional full concrete walled pit.

The earthen liners are not impermeable, but Bonnema says for systems designed to meet government-mandated permeability limits, “the seepage amount is going to be way, way less” than uncontrolled runoff.

“The seepage amount is going to be way, way less than it would be if it was uncontrolled runoff,” he says.

At the other extreme, hurricanes and violent storms can see millions of liters of liquid manure jump the banks of holding ponds and lagoons and flood surrounding farmland and waterways, killing untold fish and polluting the water supply.

Monitoring the “integrity” of every storage system and making needed repairs immediately is essential to prevent ecological disasters, Cortus says, as is ensuring each system has the capacity to handle a sudden surge in precipitation and high winds.

“You always want to have room for a storm event,” she says. “Knowing where you could move manure in a short time frame if absolutely needed – that’s the second line of defense for a catastrophe.”

Holding ponds have markers half to two-thirds of the way up the slope that indicate when the liquid or slurry should be pumped out to make
more room.

“If you’re a foot from the marker, pump it down even so,” Bonnema says. “Because the more producers push that water level at or above the marker, the more likely it’d be that a big storm could overtop them.”

Some states, such as Iowa and Minnesota, have rules in place discouraging open manure storage out of concerns over runoff and odour, while new lagoon construction was outlawed in North Carolina in 1999 after repeated overflows and subsequent environmental devastation.

While engineers are available to offer advice and state regulators provide some oversight through infrequent inspections, ultimately it is up to operators to follow operational guidelines, flag issues with aging lagoons or pits past their structural prime, and ensure their manure storage system is able to withstand a major storm.

“Typically, if a producer manages their pond well, they shouldn’t have very much chance of that runout event, absent a very big storm,” Bonnema says.

Safety tips
Manure pits and lagoons can pose serious safety risks to farm workers. Anaerobic digestive fermentation – the process by which manure becomes fertilizer – generates methane, ammonia, hydrogen sulfide and carbon dioxide. These highly toxic and potentially explosive gases displace the oxygen inside a confined storage area, and exposure can be harmful or even fatal. Workers are at heightened risk in the hot summer months and during agitation and pumping of the manure.

Workers who must enter a manure pit should first test the air quality and ensure they are wearing a safety harness attached to a lifeline so their partner on the surface can rescue them should they lose consciousness. Workers should use a self-contained breathing apparatus and maintain constant auditory or visual contact with coworkers outside the pit.

Lagoons should be ringed with fencing and locked access gates to prevent people or animals from falling in and drowning. Erickson recommends each manure pump have rescue equipment such as a lifeline or flotation device attached.

Erickson says injury and death can be avoided if farm operators take all safety precautions and ensure workers are properly trained and equipped to minimize the risks inherent in manure storage. Speed should never trump safety, she adds.

Deep thoughts
Worries over worker safety and the environmental impact of holding pond and lagoon spills have a growing number of farmers opting to store manure in deep pits under their barns.

“In the beef world, we’ve seen an increase in the last five or 10 years of manure in deep pits under a building,” Bonnema says.

Cortus has noticed the same trend on cattle farms in Minnesota, where deep pit barns are already the most common storage system for swine manure. Putting rubber mats on the concrete slatted floor to protect cows’ feet made deep pit barns hospitable for finishing cattle, who have a longer lifespan than pigs.

“We do work with producers who are choosing to abandon outside lots and go to buildings to stop runoff,” he says.

“Buildings help capture more of the nutrient value and take much less space than an open feedlot. It’s maybe a 10 percent area required for the same number of cattle in terms of their housing.”

Keeping cows out of the elements in the winter and shaded from the hot summer sun is another bonus, Bonnema adds, while Cortus says having a smaller footprint for storage and producing more potent and nutrient-rich manure by blocking precipitation can help a farmer’s bottom line.

“From an agronomic perspective, that pays off,” she says.

However, having highly concentrated manure under the barn puts livestock and laborers at higher risk of exposure to potentially harmful gases, especially when the manure is agitated.

“You have ventilation systems, but you are going to have higher gas levels in the barn than you would compared to shorter-term storage,” Cortus says.

As one final point in favour of deep pits under completely slatted floors, farmers get a hand from gravity when it comes to moving manure from the barn into storage.

Deciding what’s best
When it comes to deciding what manure storage option is best for a particular operation, Cortus says local laws and regulations essentially spell out what is allowed for livestock farms with more than 1,000 head.

“It’s likely almost dictated by the rules or norms in an area for a given type of animal,” she says. “For larger operations, that’s really the starting point – what’s permitted by law? If it’s a smaller operation, you have a little bit more freedom to choose what you can do.”

But even that is not a hard and fast rule, as certain states have stringent requirements not just for concentrated animal feeding operations, known as CAFOs, but livestock farms of any size.

“In some states, if you have one goat you probably need a permit, but in other states, the rules don’t come into play until you have 1,000 animals,” Cortus says.

“It can be a pretty big switch. Their level of management increases,” he says of containment systems that can involve a holding pond to catch runoff and a settling basin to capture solids.

“Of course, another big question: ‘What is it going to cost?’”

Some farmers are reluctant to make big changes because of the money they have already sunk into their existing manure management system.

“We see a lot of variety. Some operations are much more flexible than others,” Bonnema says.

“We’ve had producers pick up their entire feedlot and move it up the hill to another location. [Whereas] the next producer might not have easy options.”

Along with the return on investment expansion can bring, engineers like Bonnema remind farmers of the hidden future costs of maintaining the status quo – for example, keeping a low-lying storage area in an undesirable location may require an expensive pumping system to move the manure.

Bonnema says some producers who stay under 1,000 heads still choose to voluntarily implement a manure containment system to protect the health of nearby waterways.

‘A whole other operation’
Cortus and Bonnema both cite anaerobic digesters as a possible next frontier in manure management. “There is a rejuvenated push for digestion” spurred by government subsidies for biogas converted to renewable energy for the California market, Cortus says.

Proponents say they remove methane from the atmosphere, reduce greenhouse gas emissions from agricultural operations and turn a waste product into renewable energy.

But digesters are not without their detractors, including environmental groups who argue government subsidies for power generation from biogas enable the expansion of CAFOs and discourage the move to smaller, more environmentally sustainable farms.

Digesters only work with outdoor storage systems, since fresh manure has to move through the digester before it goes to storage. Deep pits under barns, therefore, are not ideal.

The technology is most often found on dairy CAFOs, but swine farmers are asking extension experts if digesters could be a fit for them as well. Cortus says farmers attracted by the idea of turning waste gas into profit should realize the work and cost involved.

“It’s a whole new level of management and a whole new type of management, so you almost need someone full-time dedicated to a digester,” says Cortus, noting some farms hire an outside company to install and manage their digester.

“It’s almost like it’s a whole other operation,” she says. •