Orgaworld is stepping into the Canadian market with its compost bedding 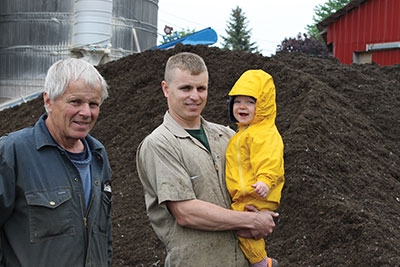 Orgaworld is best known for processing organic waste from cities. Now it is also known for making a unique bedding product.

Two and a half years ago, Orgaworld was processing organic material from Ottawa, Canada, and farmers were using the final pasteurized and pathogen-free compost as a soil amendment in the fields.

Travis Woollings, sales and marketing manager for Orgaworld, said it was then that farmers started asking about the possibility of using the compost as bedding.

“Because hay and wood shavings can be expensive and at times are hard to get, they were looking for alternatives,” said Woollings.

He checked with the company’s counterpart in the Netherlands to see if they had had any experience using the product as bedding and found they had already been doing it for several years.

Setting up in North America
“First we brought from the Netherlands and incorporated into our process, a biological spray for the finished compost,” said Woollings. “What the spray does is promote the growth of certain bacteria that suppresses the growth of klebsiella bacteria — a bacteria you do not want present around cows.”

The next step was to work with several farmers who were willing to try the new product. Orgaworld installed the misting system for the biology and began trials with interested farmers.

“We’ve been very careful about who we promote the product with,” said Woollings. “We want all the feedback from our clients and to develop it properly. “

Two of the farmers who tried the compost bedding were Todd Nixon, whose farm is located outside of Ottawa, and Wilfried Raats, who had a small dairy in Eastern Ontario. (At the time of this article, he has just sold the dairy and was introducing the new owner to the Orgaworld product.)

The Nixon experience
The Nixon farm, which includes Todd Nixon, his dad, Ron, his wife, Erin, and one full-time employee, chose the compost because they wanted more flexibility. The sand they were using in the free stalls for the milk cows was working well, but the barn holding the heifers seemed a good spot to try the compost. The compost worked especially well for the dry cows, said Todd.

“I think part of that is because they have so much room.”

The compost is delivered to the farm every two weeks. The Nixons spread the compost in the barn with a manure spreader and stir it every morning with a chisel plow on a tractor.
Todd said for anyone considering the compost, “stirring does take some time, so you have to figure that in.”

The Nixons allow the compost to build to about three or four feet deep and then remove it in the spring and fall to spread on farm fields with a box spreader. The nutrients contained in the spent compost tie up the nitrogen, so it doesn’t save them money on corn crops but Todd said it works well on the alfalfa fields.

“Another advantage of the bedding pack is that it has allowed us not to have make our lagoon bigger,” he said. “Part of the manure stays in the bedding pack with the solids and we can handle that separately from the lagoon.

“Our barns have alley scrapers and pumps into a lagoon. We hire a custom applicator that uses tankers to apply the manure. The sand has been a challenge in the pit — actually getting it out of the lagoon. We bought a 62-foot-long propeller agitator and we just stir constantly with it while they’re pumping and we’ve been able to get it down. We might have a foot or 18 inches of sandy material left at the bottom, but we used to have three to four feet left in the bottom.”

One drawback might be the smell. Because the compost isn’t manure-based, it smells a bit different, which can turn some farmers off, but not the Nixons.

It has a “chemically garbage smell to it,” said Todd, “but once you stir it a couple times, the odor seems to disappear.”

In the end, Todd said the compost has its pros and cons like any product, and you have to look at your own situation to see if it’s a good fit.

“For us, it allowed us more flexibility.”

Raats gives it a go
Wilfried Raats’ farm was the first in North America to try the new bedding. He was in the process of altering his barn and it was a minimal cost to accommodate the eight-inch, deep pack bedding.

“We just put an eight-inch curb on the back,” he said. “Basically, it’s an identical design to a sand bed.”

Raats puts in fresh compost about once a week.

“We could let it go longer, but the cows tended to get dirtier then, so once a week worked really well. On a daily basis, we raked out the stalls the same as we would a sand barn.”

He explained that the compost is used, it goes into the waste stream of the cows and out to a one-million-gallon manure pit.

“It’s not like we actually remove it and put new stuff in. It’s just the cows knock it out of the stalls when they dig holes and play in it, and we rake some out into the alley and it goes into the manure pit.”

For Raats, the biggest value of the compost bedding, over peat moss or sawdust, is the extra nutrient in the manure pit.

“For a farm that is having trouble with nutrient loading on their land base, this might be an issue,” he said. “But for our area – Eastern Ontario – we’re way short as far as manure goes. We’ve got to stretch everything we’ve got.”

“The compost seems to make the agitation on the pit a lot easier also, versus having shavings,” he added. “It seems to suspend better in the manure, and I don’t know if it’s the bacteria that does that or whether it’s just the nature of the product itself, but shavings you always seem to have a hard time with.”

“It’s quite forgiving when they lay down – no hock abrasions. They cows have good footing and we’ve had no swollen legs. There has been improved udder health and we haven’t had hoof rot anymore since we switched.”

Raats sees many positive reasons to go with the compost bedding, but also a couple of drawbacks. One is the odor and the other is the dust.

“The odor is different and the dust is quite black, versus a light-colored dust, like sawdust would have. So, basically cosmetic drawbacks.”

Slow and steady
Currently, Orgaworld compost bedding is being used in various barns – free stall, tie stall, bedding pack – and it seems to be working in all of them.

“There is a bit of a learning curve to using it,” said Travis Woollings. “You have to use a fair amount of the product because it requires a certain depth. It also takes a different mindset if you used hay or sand before. With a compost barn, you have to allow for moisture and air to circulate through the bedding in order for it to work correctly. To do that you have to add product and turn it daily.”

Although more labor intensive, the compost bedding doesn’t have the “grit” problems associated with sand. There is less wear and tear on the pumps, and, of course, in addition to this, there are remaining nutrients.

“Some of the feedback I’ve heard about the manure pits, where the spent product is stored, is that the farmers actually save money because they don’t have to clean out the manure pit after the liquid’s been pumped off. With sand bedding, there’s usually this large amount of sand sitting at the bottom of your manure pit, which has to be removed, and there’s really no value to it. We’ve heard that with this product farmers don’t have to agitate the manure pits as much and what they’re left with is extremely nutrient rich.”

Woollings said the product works especially well for Ottawa because the feedstock coming from the city is quite dry.

“That dryness is what lends itself to bedding and it’s very clean. Because the feedstock coming in is clean, the compost coming out after being processed is also clean and good quality.”

Full circle
“For farmers that are considering the use of waste process from municipalities or other programs, there is a large and very sustainable source of material that comes from cities. When it’s processed properly, it’s an excellent alternative and option for their farm operations to the traditional dry chemical fertilizers, or in this case sand, for bedding,” said Woollings.

Farmers can also feel good about using the compost bedding because they’ve helped keep organic waste out of landfills.

“The organic waste is actually being recycled several times,” said Woollings. “You’ve got the food and leaf and yard waste from the citizens of Ottawa being processed at our site, and it’s going out to the farmers not only for soil amendments in the fields for crops, but also as bedding for animals and then when it’s done as bedding for animals, it’s being land applied again. It’s a win/win.”