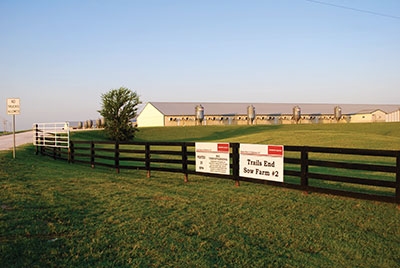 Since Oklahoma’s Trail’s End Sow Farm #2 started up in 1998, the owners and employees have focused on sustainable solutions while maintaining a solid bottom line. Pork Checkoff

Oklahoma’s Trail’s End Sow Farm #2 isn’t one of those farms that one day decided they should start making sustainable changes. Since the farm started up in 1998, the owners and employees have focused on sustainable solutions while maintaining a solid bottom line.

It was one of four farms chosen to receive the 2012 Pork Industry Environmental Steward award, which recognizes producers that demonstrate a commitment to safeguarding the environment. Judges, representing both pork producers and environmental organizations, selected winners.

The layout
Trail’s End is located in the Ames, Okla., area, near the Cimarron River. It’s part of The HANOR Family of Companies (HANOR), and is surrounded by 560 acres – primarily fields of cereal rye, winter wheat, Pearl millet, triticale and crabgrass.

Included on the farm are two large lagoons – one on the east side of the farm, one on the west side. Because of the area’s soil type, and to avoid any seepage into the groundwater, both lagoons have a 30-mil high-density polyethylene liner (HDPE).

The State of Oklahoma requires monitoring wells at each lagoon.

“It’s a state requirement that ensures ground water quality,” says Barnes. “We have one monitoring well up gradient and two monitoring wells down gradient.  The wells were placed by a hydrologist in the direction that the groundwater flows.”

Moving the manure from barns to lagoon is simple and economical. All the gestation barns have slated floors with 18-inch concrete pits underneath. The barns are washed on a regular basis, to keep odors down and for general hygiene. When the pits are full, which is about once a week, a gravity flow system of underground pipes takes manure to the lagoons.

The farm also uses an agricultural engineer to help determine water needs for the animals and for barn cleaning.
“This helps us create a water budget so we can target monthly water usage for minimizing wastage” says Barnes.

Getting nutrients to the fields
The lagoons were designed to anaerobically digest the manure into the component nutrients, says Barnes. The crops dictate when they pump those nutrients onto the field.

“When the forage is actively growing is the best time to add nutrients,” he adds.

“We will pump primarily in the spring and fall, and may also do some in the summer. It’s based on the crop and the crop needs. We observe the crops and we also work to pump at agronomic rates so that we don’t over-apply.”

Trail’s End initially hired a third-party agricultural engineer to set up the system, which was based on the number of animals and output.

At the time of pumping, the solids have pretty much settled and the liquid is pumped as far as half a mile and applied on 270 acres through a center pivot irrigation system. The system is working so well that Trail’s End rarely buys commercial fertilizer.

Crop cycles
One of the things that make Trail’s End unique is that they are able to grow forage crops year round. Barnes says there are only two to three weeks in the fall that the farm won’t have active roots in the soil absorbing nutrients.

Bill describes the cycle: “Our growing year begins in the fall when we plant rye. We plant around the first of September, and the rye comes up, and then that will either be grazed through the winter and spring with cattle, or, sometimes we’ll make hay out of the rye. Occasionally in late spring and early summer, the fields are overseeded with crab grass [and] that does a good job reseeding itself every year. So, in late spring and early summer, as the rye is taken off, the crabgrass starts growing. So, there will be a couple of weeks we’ll have crabgrass and late spring and early summer, that is overseeded (with pearl millet), which will either be grazed or taken off as forage through the summer, and then that takes us back to late summer and early fall when the rye is again sown.”

Trail’s End and other local farms use no-till methods to keep the soil intact. If the soil were to be tilled it would blow away, increasing the probabilities of wind erosion.

The crops were chosen not just because of soil and nutrients, but also based on the weather patterns. The area experiences hot summers, but relatively cool winters, with very few really cold days.

“The crabgrass just loves hot weather,” says Barnes. “And because we’ve got irrigation with our center pivots, we can apply either water or effluent with those pivots. We have a separate effluent line and water line, so if we switch from one to the other, there’s no danger of getting effluent in our water line, which could possibly contaminate groundwater.”

Not much odor
Trail’s End isn’t near any populated centers, but even if it were, odor wouldn’t be a big concern. Barnes says the lagoons naturally turn over in the spring and fall, just like a farm pond will, causing a little odor.

These particular lagoons were designed in the late 1990s to accumulate sludge over a 20- or 30-year period. There may come a time for dredging in the future, which would cause some odor, but the farm hasn’t reached that point.  The sludge would create a really good source of organic material for local farms.

“It’s a well-designed system,” says Barnes. “It was based on output of the animals, and so it was engineered to handle the digestion of the nutrients of the manure. It’s handled the manure really well.”

When asked why he thinks Trail’s End stood out as an environmental steward, Barnes is at a loss. “We didn’t do anything out of the ordinary. We just described what we do and our philosophy as far as protecting the environment.”

He adds, “There are members of our management team that are Oklahoma natives and have an agricultural background, so they realize the importance of maintaining our environment. It’s important to us. For example, when we built this we didn’t clear any more land than what was necessary to operate the pivots. It was rolling hills that were covered with black jack oak trees.”

Because of Trail’s End’s early decisions, it’s not just cows that enjoy the environmental benefits. In the morning and evening you’ll find whitetail deer grazing. And if you look closer, you’ll also find turkeys, coyotes and pheasants. The farm even sponsors the Grand National Quail Hunt.

Currently there are 35 full-time employees at Trail’s End Sow Farm #2. Although all employees are environmentally minded and trained, those who are responsible for handling effluent, as well as those who oversee the farm operations, are required by the state to have an initial nine-hour environmental training course. To stay current, every three years they are also required to have three additional hours of training.

Trail’s End hires an engineer to come out to the farm to do the training.

“They cover state regulations – what we do and why we do it,” says Barnes. “We also go over our best management practices, which are in our pollution prevention plan required of LMFOs/CAFOs in Oklahoma. They also include odor management, carcass disposal, pest control, etc.”

The owners of Trail’s End like the farm looking good from every angle. “Our owners are very particular about how our property looks, the same way they are with their own homes,” says Barnes. “And not just the sow farms, but all the surrounding property. We grow Bermuda grass around the barn sites because of the sandy soil, mow the barn ditches, and weed eat around the fence lines.”

This not only gives a good impression to the public, but it helps eliminate pests, particularly rodents that like to live in taller grass.

Composting
Trail’s End has also invested in a BIOvator, which is used for composting piglet mortalities. The large, stainless steel cylinder rotates slowly, and with the addition of fine wood chips, the mortalities are composted in about two weeks.

The compost is used in trouble spots where the soil is especially light and in danger of blowing away.

“We’re actually building up the soil organic matter and keeping the land in place,” says Barnes.

He is proud of the farm and its environmental steward award.

“We are employing the natural nutrient cycles to recycle the nutrients. It’s a beautiful example of recycling. In the case of the ground that our crops are on, we’re actually increasing the productivity of the soil of what it would be if it was just natural.”