A look at manure in cows, feedlots and fields 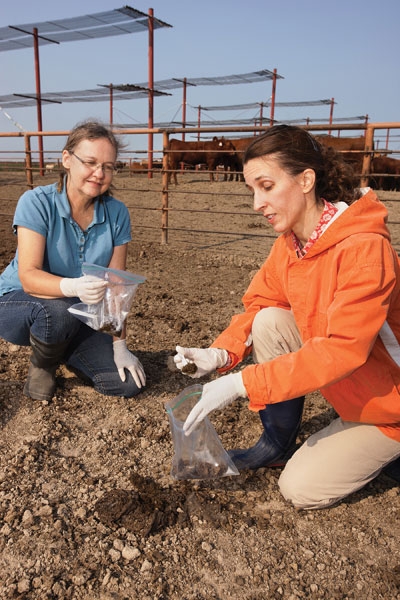 Technician Sandy Fryda-Bradley (left) and microbiologist Lisa Durso collect fecal pats from a feedlot pen. Samples are taken back to the lab to be cultured for bacteria, including E. coli.

Agricultural Research Service scientists at the Agroecosystems Management Research Unit in Lincoln, Neb., have been conducting some very thorough investigations on the microbes that dwell in cattle manure – what they are, where they thrive, where they struggle and where they may end up.

“When we look at potential pathogens that can cause foodborne illness, we need to look at the whole bacterial ecosystem,” says ARS microbiologist Lisa Durso. “For instance, some people used to think all cattle have the same bacteria in their gastrointestinal [GI] tracts. But we’ve found some big differences; so if we say, ‘Oh, it’s just manure,’ we could miss important factors in pathogen control.”

That’s why Durso headed up a study that provided the first-ever “gold standard” accounting of the fecal bacterial types associated with beef cattle.

The researcher used pyrosequencing, a relatively new method of rapidly analyzing bacterial DNA markers, to classify the bacteria into different taxonomic groups. “People hadn’t looked at doing this type of bacterial census before, because some bacteria could be cultured, but other types didn’t grow well,” says Durso, who conducted this investigation while she was working at the ARS U.S. Meat Animal Research Center in Clay Center, Neb. “Pyrosequencing let us give every bacterium a name tag ID.”

Durso observed bacteria in the beef cattle that had not been reported in dairy cows. She also identified a diverse assortment of bacteria from the six individual beef cows, even though all six animals consumed the same diet and were the same breed, gender and age. Given her results, Durso believes much more high-resolution community sequencing will be needed to identify “core” members of the bovine bacterial community.

Durso also compared her results to a survey of bacterial types she collected from beef cattle feedlot surfaces. Of a
total of 139 different bacterial genera from both groups, 25 were detected in both fecal samples and feedlot floor samples, 21 were found only in the fecal samples, and 93 were found only in samples from the feedlot surfaces. She attributes the distribution differences to selection pressures bacteria face in feedlot pens that aren’t present in the oxygen-free, dark, moist cattle GI tract.

The implications of these findings? “The focus on food safety is fecal contamination, and preharvest pathogen control has often been animal-centric – for instance, how to ‘fix’ the problem of E. coli in a cow’s GI tract,” Durso says. “But a bacterium has a different pathway once it’s outside of the gut. So we need to start thinking strategically about how to control pathogens when they are at their weakest—outside the animal, rather than inside it.”

Durso also partnered with Lincoln agricultural engineer John Gilley and others to study how livestock diet affected pathogen transport in field runoff from manure-amended soils. “Manure applications can help a farmer meet soil nutrient requirements, but it’s more expensive to apply it every year because of the costs of labor, equipment and fuel,” Gilley says. “A farmer can reduce costs by applying enough manure to meet two-year or four-year soil nutrient requirements, but we need to understand more about how these larger applications might be affecting the environment.”

Gilley’s team amended conventional-till and no-till fields at one-, two- or four-year application rates of manure from livestock that had consumed either corn or feed containing 40 percent wet distillers grains. After a series of simulated rain events, they analyzed runoff samples from the fields. They found that neither diet nor tillage management significantly affected transport of fecal indicator bacteria, but that diet did affect transport of bacteriophages – viruses that invade bacteria – in the runoff.

Gilley also conducted an investigation into how wheat residues affected water quality in runoff from plots amended with one-, two- or four-year application rates of manure. Some of the plots were covered with postharvest wheat residue, and others were bare.

“Our study – which is one of the first studies on this question – indicates there is a significant difference in how manure application rates affect runoff loads,” Gilley says. “And even though crop residues can be effective in controlling soil erosion, the residues also slow the movement of water across fields. So there’s more time for water to pick up nutrients from the soil.”

“This study shows that if you have hedges you can substantially reduce nutrient loads in runoff,” Gilley says. “Planting grass hedges is a practice that isn’t expensive and can have a substantial impact.”

Results from these studies have been published in Foodborne Pathogens and Disease, Applied and Environmental Microbiology and Transactions of the ASABE.

Ann Perry is a member of the USDA’s Agricultural Research Service Information Staff.