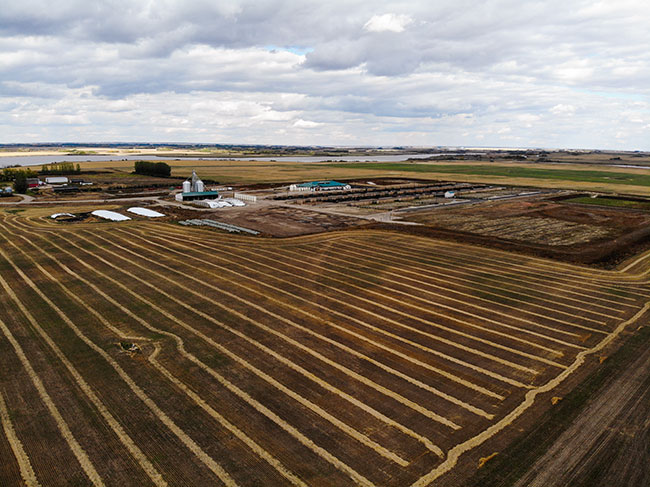 A research project at the University of Saskatchewan is examining the economic and environmental benefits of strategic manure application.

“What we’re doing is, in a nutshell, looking at the impact of precision manure management strategies on soils, crops, water and air,” says Jeff Schoenau, professor of soil science at the University of Saskatchewan and Saskatchewan Ministry of Agriculture soil nutrient management chair.

The project began in 2018 and will run until 2022, and involves a multidisciplinary team of researchers from agriculture, engineering, hydrology and toxicology.

Earlier this year, the University of Saskatchewan’s Livestock and Forage Centre of Excellence (LFCE) received a $3.2-million investment towards management and operations as part of $7 million in funding to the university from the Saskatchewan Agriculture Development Fund (ADF), a joint federal-provincial government funding program to advance cattle, swine, and poultry research. The precision manure management study that Schoenau is involved in was one of the projects to receive funding.

The LFCE was developed as a way of modelling every aspect of livestock production on the Canadian Prairies. It includes land for crops, science and field laboratories, and a 1,500-head cattle feedlot. The Centre’s grand opening took place in October 2018, bringing to life an idea that was years in the making.

“The planning phase was years ahead of that so that, when they placed the Livestock and Forage Center of Excellence in this position, on this land, they had solid background information prior to the feedlot being constructed,” says Kris Ringwall, director of the LFCE.

“So, in reality, that start date goes way back to when Terry was starting to think about the sampling that they could do to look at the groundwater, and the movement of various components within land and soil.”

“Terry” refers to Terry Fonstad, associate professor in the College of Engineering at the University of Saskatchewan. Fonstad was one of the leads in the development of the LFCE, according to Ringwall. His research, also funded through the ADF, covers another facet of the manure management study that Schoenau is working on; while Schoenau’s focus is the soil component, Fonstad’s area of expertise is waste management and utilization and groundwater protection.

The two projects work together to create a more complete picture of what happens in the environmental system of the field when manure is applied and the ongoing effects, one of the key benefits of the LFCE’s whole-farm production research model.

“As people, we’re so quick to draw conclusions. And particularly, working with manure, it’s like, what are the benefits here?” Ringwall says. “It’s easy to say there are no benefits, but we all know that everything cycles – well, we don’t all know, that’s the problem. It’s a process of cycling nutrients that drives the world.”

The LFCE is also being used for complementary research being conducted by Agriculture and Agri-Food Canada (AAFC). Later this year, Schoenau is set to be involved with a research project led by Haben Asgedom Tedla, systems agro-ecologist with AAFC Saskatoon, looking at runoff mitigation strategy options, like biochar and gypsum amendments.

Testing variable rate application
Schoenau’s research takes place on the lands surrounding the Beef Cattle Teaching and Research Unit (BCTRU) feedlot, located a few kilometers southeast of Saskatoon, near Clavet. He and his team conducted baseline background assessments in 2018 and made their first application of manure in the spring of 2019. The initial application was of fresh manure, as the manure is supplied by the cattle at the BCTRU feedlot, which had been in place for less than a year. The next manure application will be in 2021, and the team plans to apply composted manure.

“In our variable rate, we increased the rate of manure application on the low-productivity knolls and up-slopes and decreased or eliminated the application of manure in the high productivity foot slopes and, that being right out of the watershed basin centers, using the high watermark as our setback. So basically, keeping the manure out of the sloughs.”

Stephen Froese draws a sample from the gas chamber. Photo courtesy of the University of Saskatchewan LFCE.

Preliminary results
As 2019 is the project’s first year of data collection following a manure application, any results are preliminary and cannot be taken as indicative of a pattern. However, Schoenau says the initial results are positive.

“We’ve seen more uniform production of the silage barley that we grew in 2019 across the landscape with the precision management with the variable rate application,” Schoenau says. “And furthermore, we found there really was no yield penalty from reducing or eliminating the manure application in those lower elevation foot slopes and depressions. From the soil standpoint, when we measured after harvest of the silage barley in the fall, we saw reduced residual phosphorus in the depressions in the variable rate.”

Schoenau says 2019 was a dry year at the research site, and the data show that greater amounts of nitrate applied at higher levels in the variable rate application were left unused. “So, this leads us to think, down the road, in dry conditions we may want to cut back our rate on those areas in the field.”

The team is hoping to get into the field to collect snowmelt runoff water to test for nutrient levels now that the first manure application has overwintered. With samples collected post-harvest in 2019, the team has run simulations on runoff and found reduced concentrations of soluble phosphorus in water from the soils with the variable rate application.

Schoenau and his team measured greenhouse gas fluxes throughout the 2019 season, and compared them to commercial fertilizer levels.

“I think we’re seeing some promising results coming out of this precision manure application approach in terms of both agronomics and also environmental protection,” Schoenau says.

“They’re funded for another couple years, but in reality, I don’t know that we would ever quit it,” Ringwall says. “We want to follow it through as long as we can and [understand] its impact on the land.”