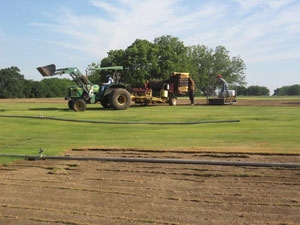 Lagoon water is used for irrigation and sprayed onto fields throughout the growing season, with the grass regrowth coming from harvested runners. Contributed photo

In the most basic sense, everything within the farm feeds into everything else. This is the objective of Stoney Point AgriCorp, a family-owned cattle-raising farm in Texas that was founded in 1988. It currently raises about 8,000 cattle annually for the state’s beef and dairy industries. The cattle are bred and born at the company’s Stoney Point Feedyard in Melissa, Texas. It has 330 acres, 96 open pens – and a lot of manure to contend with.

Stoney Point AgriCorp has not shied away from manure management. In fact, it has taken such a proactive, positive approach that the National Cattlemen’s Beef Association Region IV gave this company a 2009 Environmental Stewardship Award.

“Stoney Point has been able to improve the environment and become successful through their commitment to doing the right thing,” says Dave Petty, chairman of the Environmental Stewardship Award selection committee. “In doing so, they have made it a priority to develop an extensive conservation plan to protect water quality, increase soil health, improve animal husbandry practices and wildlife habitat.”

At the heart of Stoney Point AgriCorp’s manure management success is its use of waste to grow Zoysia turf grass for lawns. This practice, which provides turf for use at golf courses and sports facilities, provides an environmentally sound way to consume the manure and to replenish the land the grass is grown upon.

“We have got about 35 acres of turf grass growing at our Melissa farm,” says Mark Quinn, a doctor of veterinary medicine and president of Stoney Point AgriCorp. “We feed the grass with irrigation water from our run-off lagoons, and manure-based compost taken from our feedlot. The turf is grown so rich in nutrients that it has enough phosphorus in its soil to last up to a decade. And because we are adding manure to the fields, the soil is not depleted when we cut and roll the turf.”

From feedyard to turf
Stoney Point AgriCorp began looking for ways to use its manure back in the 1990s. This led the company to a multi-party taskforce with Texas A & M University and others in 1998.

“We did a joint venture with Gardner Turf Grass, with Texas A & M serving as an advisor,” Quinn says. “They provided us with the know-how and the specialized equipment to start a turf grass farm. We provided the land, the manpower and the manure.”

In this operation, 17 to 20 acres of turf are harvest annually. The lagoon water is used for irrigation and sprayed onto fields throughout the growing season, with the grass regrowth coming from harvested runners.

“It was vital to set up a good irrigation system, to ensure that the lagoon water is spread evenly,” Quinn says. “Even then, we are still at the mercy of the weather, because our lagoons may not have enough water during the dry season to irrigate the fields.”

As any suburban homeowner will tell you, it isn’t easy growing turf. The same is true for Stoney Point AgriCorp.

“It involves a lot of headaches and challenges,” says Quinn. “There’s always the issue of weed control: We have to keep locally occurring Bermuda grass – which is not turf quality – from choking out the Zoysia. We have to watch out for other weeds, and we have to keep the turf mowed regularly. If you don’t, you don’t get lawn-quality turf. And finally we have to remove the clippings, because you can’t leave them on the turf.”

Quinn credits company general manager Robert Airhart and his entire crew for their dedication to making this process work.

“Well water is very deep down here, so it is not practical to irrigate the fields in this way,” Quinn says. “As a result, we have to rely on our wastewater lagoons, and if they are low, we don’t have enough to go around.”

Part of an integrated strategy
“Mark and Stoney Point’s collective experience, leadership, initiative and co-operative spirit have been invaluable to our development and evaluation of sustainable nutrient management systems and practices,” says Donald Vietor, a professor, with Texas A & M University and AgriLIFE Research. “To that effort, Mark and Stoney Point have implemented a number of practices aimed at protecting and improving the land upon which they make a living.”

Stoney Point AgriCorp’s turf operation is just part of its “whole farm” approach to waste. For instance, the company collects and then sells about 10,000 tons of manure annually from its feed yards. The manure is bagged and distributed through a joint venture with Hope Agri-Products and is then retailed through mainstream vendors such as Wal-Mart, Home Depot and Lowe’s.

In the same vein, Stoney Point AgriCorp has launched a subsidiary called Alternative Feeds to use human food waste to feed cattle; both to lower costs and to reduce diversion to landfills. A case in point: Milk that has passed its expiry date is used to feed calves at the company’s Roswell Calf Ranch calf-raising operation. (For safety’s sake, this already-pasteurized milk is pasteurized a second time before being fed to calves.) Also used are byproducts from pinto bean processing and “cotton burrs” discarded during cotton milling.

All of these elements tie into Stoney Point AgriCorp’s “whole farm” concept, which includes raising both beef and dairy cattle for the market and other farms. In the most basic sense, everything within the farm feeds into everything else. The cattle waste feeds into the turf grass and compost, which earns money and disposes of waste in an environmentally sound manner. The waste from expired milk and plant processing is brought in to help supplement the cattle’s food stock; reducing costs and landfill usage. Finally, the run-off lagoons protect local water sources, irrigate the turf farm and provide habitat for local wildlife.

“We are a cattle operation, first and foremost,” Quinn says. “But because we want to take care of the land we’re on, we have branched into turf and compost as ways to deal with waste sensibly, safely and economically. It is not always easy – taking care of the turf can be challenging at times! – but our approach has allowed us to continue raising cattle while maintaining the health and quality of our local environment.”