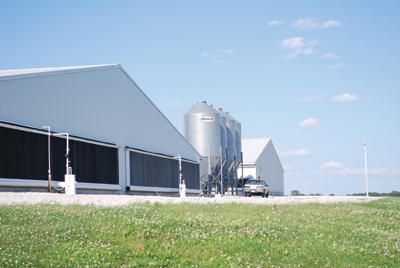 Although the design of Pembroke Oaks Farm’s barns may appear simple, the complexities are on the inside and helped Pembroke Oaks Farm win the National Pork Board’s 2010 Pork Industry Environmental Steward Award. Contributed photos

When you find something that works, stick with it. That’s how Malcolm DeKryger, vice-president of Belstra Milling, feels about the two-barn sow unit at Pembroke Oaks Farm, in Wheatfield, Ind. The successful design is something they’ve used at four of their locations.

Pembroke is affiliated with Belstra Milling, a family and employee-owned corporation, and is one of 10 compounds throughout Northwest Indiana and Northeast Illinois that Belstra designed and built from scratch.

The 20-acre Pembroke Oaks Farm location was chosen in part because of the sparse population of both pigs and people, as well as nearby grain farming operations, which would find use for the farm’s manure.
The small acreage is also strategic.

“We don’t try to own everything,” says DeKryger “We work very hard to establish relationships with neighbors before we ever get started.”

For example, early on Belstra worked with the family-owned Harper Brothers Farm.

“They were contiguous to where we wanted to do our work and, before the barns were built, we had agreements on over 500 acres of corn and soybean ground that we could work with for our nutrient management program when our permits and our facilities were put together,” says DeKryger.

Getting it done right up front
When Belstra decided to build at Pembroke, they worked with engineering specialist, Dr. Mike Veenhuizen of Livestock Engineering Services in Greenwood, Ind.

“He’s a former professor of Ag Engineering at Ohio State [University] and his specialty is designing manure containment and doing the permitting on facilities – pigs, dairy and poultry,” says DeKryger.

Dr. Veenhuizen drew up all of the concrete and design criteria. His design included, among other things:

“In addition, we have a vertical test culvert in ground to the tile, with a valve on it,” explains DeKryger. “With it we can test the water to see if any manure water is coming out of the building. If it is, we can shut that off and stop the water from getting out to a ditch, until we can dig it up and find out where the problem is.”

Dr. Veenhuizen also provided a booklet that illustrated all the pieces of dedicated land for the future nutrient management. It demonstrated that all the manure could be contained within Harper Brothers ground, “although over time other people in the area have asked for manure and we’ve worked with them,” says DeKryger.

Simple design
Despite the complexities, from the outside, the design is simple – a breeding/gestation barn and a farrowing barn.

The farrowing barn has a shallow pit with a sloping floor underneath. The depth is about eight to 15 inches and the plugs are pulled about every three weeks to drain it into the pig gestation/breeding barn.

The 400-foot by 120-foot breeding/gestation barn has a much larger eight-foot pit, capable of storing up to 2.87 million gallons.

Although DeKryger says they could store up to eight or nine months, it’s emptied every six months – in the spring and then in the fall. “We plant a corn crop in April. And in October/November we go back and distribute manure because beyond that it freezes,” he says.

Hiring out the pumping
When it comes time for pumping Pembroke Oaks hires Heartland Farm Services, a company that specializes in dragline manure injection and nutrient placement.

“We have the fields and the roads set up so that we can drag line hoses as far as two miles away,” says DeKryger. “Heartland puts manure on at an agronomic rate to balance what the crop needs are for the Harper Brothers. And Kurt Nagel is the nutrient compliance person for Belstra Milling that works with Harpers to balance the nutrients.”

In addition to Heartland, Pembroke has a couple other farmers pump from the barn into tanks. Afterwards they take it up to four or five miles away to distribute it on their crops.

Although Pembroke doesn’t make any money on the manure, they are happy to break even.
“It’s a good deal for my neighbors,” says DeKryger. “And when my neighbors have a good deal, then I have a license to continue to just keep on doing what I’m doing.”

Unique neighbors
A unique aspect of Pembroke Oaks Farm is its adjacent neighbor — an 8,000-acre wilderness known as the Jasper-Pulaski State Fish and Wildlife Area, maintained by the Department of Natural Resources (DNR). The land butts up to one of the barns and there was initially serious concern in the community that the farm would have a negative impact on the bird sanctuary. People need not have worried.

“This past winter when I went to the DNR to get what I call my report card, to see how we’re doing, they said, ‘You’re doing fine,’” says DeKryger. “Then they said, ‘Hey, we’ve got a question for you. Who are a couple of different people that handle your manure because we want to get a bid to have them apply it to our ground at the DNR?”

The DNR raises sunflowers and corn to feed wild animals, including the 30 to 40,000 Eastern Sandhill Cranes that come through in the spring and fall. The manure would fertilize the crops needed to feed the birds.

The future neighbors were so worried about the future farm in 2005 that they filed a lawsuit through Indiana’s Department of Environmental Management to stop the building.

“We worked through that and the people are today surprised at how little impact the farm has,” says DeKryger. “I had one of the people involved come to the door the other day and say, ‘You know, I have to tell you the truth. I haven’t smelled you for a year-and-a-half now.’ So that’s been pretty huge for us.”

Pembroke has also done its part to improve neighbor relationships by helping out in a time of need. During a recent winter storm when the electricity went out, DeKryger let his neighbors know the farm had a generator and heat, and folks could come over if they needed to.

“It’s hard some days,” says DeKryger. “Nobody likes to have people confront them. But my neighbors aren’t afraid to find me if there is a question and I will try to move heaven and earth to try to make them happy if there is anything we can do to make a difference for them.”

Keeping the smell down
One of the ways Pembroke keeps the odor down for its neighbors is by venting toward the DNR hunting grounds. It doesn’t bother the deer and the thick woods would serve as a giant filter.

“It doesn’t do any damage to the wildlife or the trees,” explains DeKryger. It’s 70 feet away, so there’s some blending of air that goes on and it’s not like it’s caustic air or anything like that.”

Also, the way the barns are designed, the air blowing out is relatively odor-free. Large fans draw fresh air in at the end of the barn and pull it through quickly. This pulls heat off the animals for comfort, but doesn’t pick up much odor.

There are smaller fans in the pit. “It doesn’t take a lot to ventilate the area where the manure is,” says DeKryger. “So there’s not a lot of air going across the manure and it therefore doesn’t push a lot of smell out.”

New projects
This particular design isn’t new to Belstra. “What we did here pretty much mimics the farm that we did about three years before it.”

It worked so well that Belstra used the same design on the following two projects after Pembroke Oaks. “It’s a system that we like a lot,” says DeKryger.

DeKryger believes one thing that sets the farm apart is the number of professional groups and companies that oversee this farm and have done their jobs professionally from the start.

“We’ve got the right people doing the job,” he says. “Everyone from Dr. Veenhuizen, to the construction crew, and others like Kurt Nagel, Heartland Farm Services and Harper Brothers, who do a great job of farming the ground.”

DeKryger says the proof is in the pigs. Pembroke recently had a sow give birth to 26 live piglets. “A great farm means healthy pigs.”

Related
Budgeting for P, N with manure applications
Getting creative
In the news: Janaury-February 2011
New technology a game changer for Wisconsin dairy
Tags