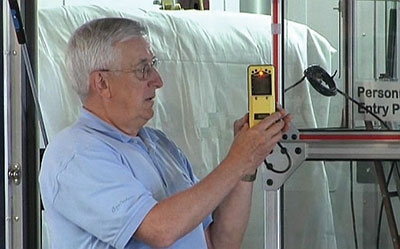 Harvey Manbeck, distinguished professor emeritus of agricultural engineering at Penn State’s College of Agricultural Sciences, demonstrates the use of a hand-held monitor that can detect deadly hydrogen sulfide gas in manure-storage facilities. of Penn State

Manure storage poses a significant hazard to agricultural workers due primarily to the danger of toxic gas buildup. Exact statistics are difficult to determine, but researchers estimate that about 10 people die each year in North American animal-manure pits.

With increased focus on preventing surface water contamination, the number of such manure storage facilities on farms is steadily growing. According to the U.S. Department of Agriculture, the average farm size is increasing and the number of farms is decreasing, which also is likely to contribute to the growing number of manure pits.

“The reason we got involved in this is not because hundreds of people are dying each year but rather the tragic scenario of multiple deaths per incident,” explained Harvey Manbeck, distinguished professor emeritus of agricultural engineering. Manbeck and Dennis Murphy, distinguished professor of agricultural safety and health, co-led the eight-year research project, which was funded by the Northeast Center for Agricultural Health.

Accidents typically happen when someone enters a manure pit to retrieve something, make a repair or clean the storage facility. Victims succumb to toxic fumes caused by hydrogen sulfide, methane, carbon dioxide and other noxious gases.

“When a family member comes by and sees that the father or son is in trouble, he or she goes in to try to help and is overcome,” he said. “Many times we have multiple deaths of family members, friends or co-workers.”

The new standard, just adopted by the American National Standards Institute, or ANSI, and the American Society of Agricultural and Biological Engineers, which published the standard, ultimately will reduce the risk involved in entering manure pit facilities.

Manbeck and Murphy are now in the process of developing an online design tool that will allow building professionals to create a ventilation system for any shape of facility.

“What is unique is that we are making the design of a ventilation system more user-friendly,” Manbeck said. “And the intrinsic benefit is that if you make it easier, it increases the likelihood that such systems will be designed into new facilities or retrofitted into existing facilities.”

If a building is t-shaped, for example, the online tool will evaluate how long you need to ventilate that space before the contaminant gas concentration has decreased and the oxygen level has increased to a safe level.

The design software should be available online at Penn State sometime in 2014.

The Northeast Center for Agricultural Health, the project funder, is one of nine centers established through the Agriculture, Forestry and Fishing program of the National Institute for Occupational Safety and Health. Agriculture, forestry and fishing occupations are the most dangerous in the United States, with a fatality rate eight times higher than all other U.S. industries combined – twice as great as those of mining or transportation and 2.5 times greater than that of construction.

The program has seen an overall reduction in injuries and deaths in agriculture, forestry and fishing since its inception in 1990. Deaths have decreased 40 percent, from 931 in 1992 to 557 in 2011.

“In our current environment of budget austerity, this is an example of a relatively low-cost program that is making a significant impact on public safety and at the same time saving farmers, insurers and government considerable costs related to injury and damage,” said John May, director of the Northeast Center for Agricultural Health, which is based in Cooperstown, N.Y.

An independent five-year review by members of the National Academies of Science, published in 2012, gave the Agriculture, Forestry and Fishing program the highest score for relevance, five out of five, and a four out of five for impact on worker safety and health. These are among the highest scores ever awarded to a government program of its kind.