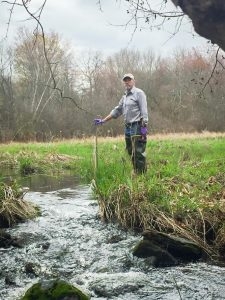 January 26, 2018, Storrs, CT – Understanding the source of contaminants in waterways is crucial for public health and safety, and a University of Connecticut professor is developing an easy way to do just that.

All contamination will eventually find its way downstream. In Connecticut that means it may travel through neighborhoods where residents swim, to larger recreational areas such as beaches, and eventually to the Long Island Sound and shellfish beds. And, without knowing the exact source of the problem, the contamination can’t be addressed.

John Clausen of University of Connecticut’s Department of Natural Resources and the Environment, is now testing a protocol he developed to find the source. Clausen started this project almost by chance when he realized that a method had not yet been developed.

“I discovered that no one has perfected the technique for being able to look at a water sample, find E. coli and tell you where it came from, so that’s my quest,” he says.

The first step toward this goal was to identify the streams to monitor, which was a rigorous process, says Clausen.

While there are plenty of waterways in the state that are contaminated – 200 in 2016, according to Connecticut’s Department of Energy and Environmental Protection – the streams needed to pass by farmland.

Farm animals and animals, in general, are often the source of the contamination. So Clausen started in the Thames river Basin, initially picking more than 30 sites and then narrowing that number down to 10 streams.

Once the sites were chosen, Clausen installed a type of water sampler at each location to collect samples whenever there is a significant rainfall event.

“When you get one-to-two inch storms, you really get high E. coli values,” says Clausen.

To help with the collection efforts, the researchers coordinated volunteers to collect and deliver the water samples from all of the sites after heavy rain events. Clausen says they’ve become very good at watching the weather to determine when to collect samples.

Then the samples with high contamination are sent to a lab to quantify the level of coliform bacteria from animal sources.

Now Clausen is designing tests for E. coli specifically. He and his team of student researchers are developing tests for chicken, horse, cow and human sources. The process involves collecting fecal samples, isolating the bacteria and their DNA, pinpointing species specific markers to target and then working out the fine details to optimize the tests.

“We are now in the statistics part of development. This winter we’ll be sequencing to see how well our tests match up with the bacteria in the water samples,” says Clausen.

The overall goal is to identify producers and sources of contamination so remediation efforts can be put in place. Clausen points out that industry already has best practices to reduce E. coli in waterways from agricultural sources, manure management being one of those. When manure is not handled properly, for example, bacteria-rich runoff can easily make its way into our waterways.

“Just storing manure in holding tanks is very effective. There is a die-off period for pathogens, after which the manure can be spread more safely,” Clausen says.

Unfortunately for farmers, holding tanks are pricey and other best practices are not always easy to carry out.

But fortunately in the case of E. coli, unlike that for other types of runoff such as fertilizers, the E. coli that make their way into the watershed don’t seem to persist for quite so long.

Once bacterial source tracking is available and sources of contamination are identified, remediation efforts could potentially have a big impact on returning streams to safe levels fairly quickly.

“I’ve already had officials ask if we can start testing,” says Clausen. “We’re not there yet, but I think we’re close.”