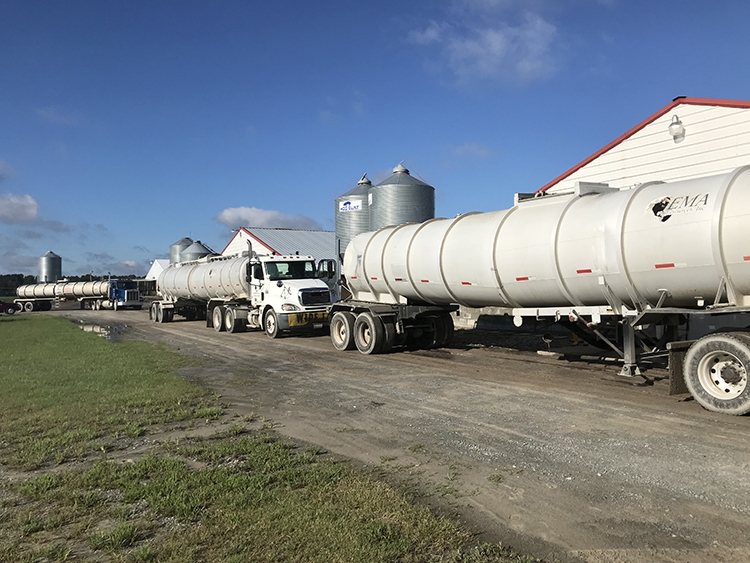 It’s been almost a week since Hurricane Florence struck North Carolina and some hog farmers are still dealing with challenges left over from the storm.

According to a report from the North Carolina Pork Council [NCPC], some hog farmers and partner production companies are going to extraordinary lengths to care for their animals, including living in the barns for days, traveling by boat to do chores and even being shuttled to farms via helicopter.

Some are also dealing with manure management problems.

“While it’s clear that farmers properly managed lagoon levels in advance of the storm, a small percentage of lagoons have been impacted by the record-setting rainfalls,” the NCPC report stated. “In some cases, lagoon levels are being lowered by transferring liquids off the farm in tanker trucks or by piping to other lagoons with ample storage.”

According to a Sept. 23 report from the North Carolina Department of Environmental Quality, five lagoons in the state suffered structural damage, 32 lagoons overtopped, nine lagoons were inundated [no indication of discharges], 18 lagoons are at full capacity [have no freeboard left] and 39 lagoons have zero to 3-inches of freeboard available.

“While we are dismayed by the release of some liquids from some lagoons, we also understand that what has been released from the farms is the result of a once-in-a-lifetime storm and that the contents are highly diluted with rainwater,” the NCPC stated.

“This was an unprecedented storm with flooding expected to exceed that from any other storms in recent memory,” said Steve Troxler, NC Agriculture Commissioner. “We know agricultural losses will be significant because the flooding has affected the top six agricultural counties in the state. The footprint of flooding from this storm covers much the same area hit by flooding from Hurricane Matthew in 2016, which only worsens the burden on these farmers.”

The department’s environment programs and division of soil and water conservation is assisting livestock and poultry farmers with recovery to ensure environmental impacts are minimized to the extent possible. The department’s veterinary division is helping to assess risk to livestock operations and depopulation teams are on standby and are assisting producers with disposal concerns.