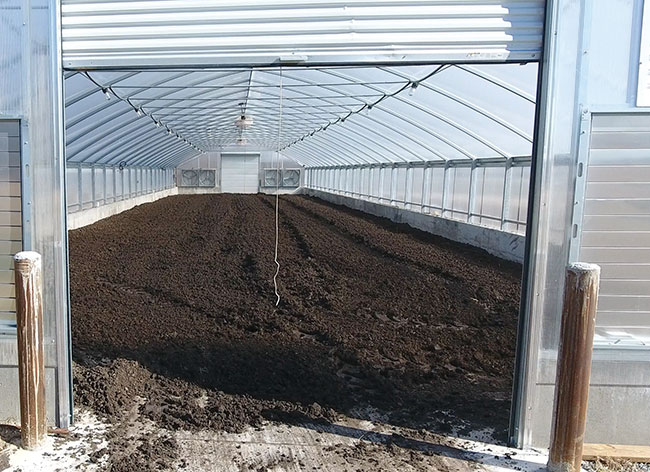 Ambient air-drying in a greenhouse-like setting is a common drying solution for sludge. All photos courtesy of Mahmoud Sharara.

These aren’t words to live by when it comes to sludge, according to Mahmoud Sharara, an assistant professor and extension specialist in biological and agricultural engineering at North Carolina State University, and expert on the effects of sludge on manure storage systems.

Instead, producers who wish to avoid stinky and expensive surprises with sludge buildup in anaerobic swine lagoons or digesters should take a hands-on approach to sludge management.

But first, a definition: the word “sludge,” says Sharara, “is typically used to refer to the residue or the material that remains after manure or organic materials are broken down by bacteria or microorganisms.”

This includes sand, soil, dead bacterial cells, digested residue and other material that can’t be further degraded in the lagoon.

Sludge naturally accumulates and, no matter how it’s stored, eventually has to be dealt with, but depending on the size and depth of the lagoon, this can take years–or even decades. This means that for some farm operators, dealing with sludge isn’t part of regular farm management.

“Under regular, normal operations, sludge buildup could take one to two decades,” says Sharara. “Now, there are certain situations where decisions on the farm increase the rate of buildup–for example, on a dairy farm that relies on an inefficient sand separation system, sand increases accumulation of the sludge in the lagoon.”

Another example might be when a farm manager disposes of spoiled feed by dumping it in the lagoon – “that could increase the level dramatically,” he says.

But as sludge starts to accumulate to a problematic level, treatment options become more limited, which speeds accumulation even more. How does this work? Sharara says it helps to picture the three “zones” of the storage lagoon. The top level is the temporary liquid storage zone, from which irrigation pumps draw. Below this is the permanent liquid treatment zone, and below that is the sludge accumulation zone.

Sludge will build up faster in older sludge lagoons that are not deep enough or were not designed with a sludge accumulation zone.

Sharara says that in some parts of the southeastern United States, including North Carolina, because of the water table level, sludge lagoons are only 10 to 12 feet deep at the maximum, and farm managers have to deal with sludge more regularly than those located in regions that allow 20-foot-deep lagoons.

It’s not just lagoon design that dictates the timeline, though: regional regulatory requirements do too. In North Carolina, producers are required to measure sludge depth annually. “Through this process, operators become aware of it as a management constraint and ideally start to plan for it,” he says. 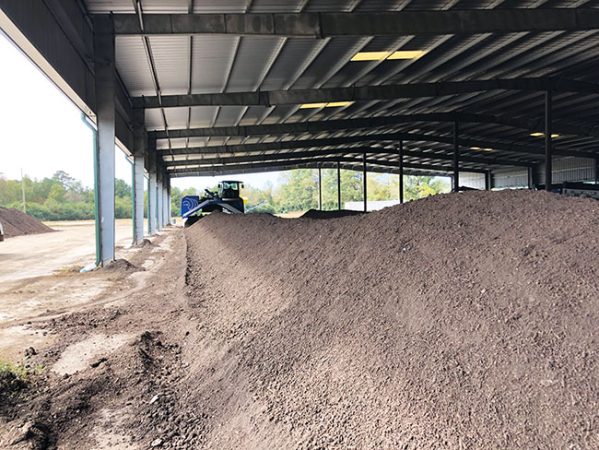 A major challenge with sludge is getting it to a place where spreading it is an option.

Signs of buildup
The most obvious sign of a sludge problem is when islands start to form in a treatment lagoon.

But on most farms with open treatment lagoons, the first sign of sludge buildup is more likely to be a noticeable odor, perhaps followed by complaints from the neighbors.

As the bottom of the structure starts to creep closer and closer to the surface, the distance at which the microbial activity is happening also gets higher, explains Sharara. “Before, the gasses traveled up through a distance of liquid or slurry where the material breaks down, but when there isn’t that distance or that zone above the treatment, intermediate gasses leave the surface of the structure, which contributes to odor,” he says.

Producers with lagoons rely on irrigation systems to keep the levels under control. The second sign of a sludge problem is issues with the flow of irrigation from the lagoon. As sludge levels rise, the flow from the pump can become disrupted or plugged – or producers might notice unusual spray patterns when spreading, because the liquid is no longer the right consistency for the system.

Those are all examples of how producers might get surprised by an issue with sludge. There are alternatives. They can also get an idea of sludge accumulation via sampling lagoon effluent, says Sharara. Samples will start to contain higher levels of phosphorus, zinc and copper. These are enriched in lagoon solids, and found at lower levels in the liquids.

“That’s one of the benefits of keeping records and keeping track of trends. If you’re noticing an increase, that could be a signal that the sludge is coming closer to the surface,” he says.

In states like North Carolina, testing is a regulatory requirement; you’re also required to measure the distance between the sludge and the surface of the lagoon. There are certain thresholds where if this distance has decreased, the farm operator is required to develop a plan for removing the sludge.

Sharara recommends regular testing for everyone. “Having a hands-on approach to managing a lagoon is critical to ensuring it operates as it was designed,” he says. 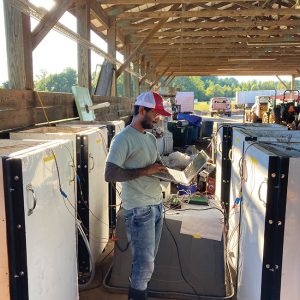 Sharara’s lab has been “pleasantly surprised” with the results of incorporating sludge at various inclusion rates. 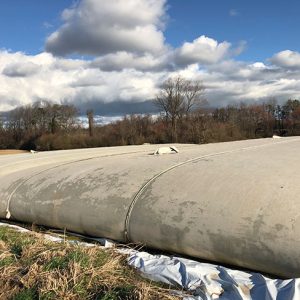 Sludge can also be added to compost products, which could balance out some of the more challenging aspects of sludge.

“In certain areas it’s not a problem as much as it is part of doing the business, just as how often you apply becomes part of the system. But in specific regions, where it’s not part of the management plan, it becomes an issue,” he says.

The difficulty and expense of dealing with sludge heavily depends on the amount of acreage nearby for which spreading is an option.

On many farms, the solution is to use an agitation pump in the lagoon that’s connected to a tanker, he says; as the lagoon is agitated, the sludge at the bottom is broken up, and the ensuing slurry can be pumped into the tanker for application on nearby fields. This method is commonly referred to as “pump and haul.”

The catch is that it’s an option only in areas where operators are traveling just a few miles to the acres for application; otherwise, it’s too costly.

Sharara says the biggest challenge around sludge management is getting the solids out of the lagoon, and onto acres where the nutrients are needed, at the lowest cost to the producer. Moving water is a major logistical challenge.

When acres become scarce, as in some parts of North Carolina, or when there’s a high concentration of animal operations and competition for acres, producers might choose to use a solid liquid separation system or filtration bag. How it works: within a few hundred feet of the lagoon, a polymer dosing station treats the dredged sludge in a lined temporary basin; once treated, the solids are filtered and applied to farther acres while the liquids are pumped back into the lagoon. Dewatered sludge costs less to move to farther acres, but dewatering sludge is costly, says Sharara.

Sharara’s lab has been looking into less expensive options, including thermal drying, to remove as much water as possible so solids can be moved further from their source.

Currently, there are no commercially-available farm-scale drying options in North Carolina, but Sharara believes that may change once there’s enough research to support the practice.

“We don’t rely on drying [much] in animal agriculture, but here in North Carolina, it has a higher opportunity of adoption,” he says.

One such method is ambient air drying, in which sludge is dried in greenhouse-style structures that rely on ambient or mechanical air movement via fans. In North Carolina, there’s too much rainfall to allow spread sludge to dry naturally unprotected from the weather. The greenhouse structure prevents rainfall accumulation while the fans keep air moving.

Sharara’s data shows these systems can dry sludge from 80 to 90 percent moisture to around 10 percent moisture in a matter of days. Producers can adapt unused farm structures, such as poultry houses or tobacco greenhouses, for this purpose.

Another approach Sharara’s lab is studying is adding sludge to compost products.

“Compost has a wider application base compared to manure, especially as it can go to horticulture or vegetable production, and it allows us to balance out the challenging aspect of sludge, which is the higher mineral content,” he says.

Sharara says he and his collaborators were “pleasantly surprised” by the results, especially as the higher inclusion rate proved beneficial. “We could increase the sludge–there was no negative impact. It created higher emergence and higher compost stability indicators. And plant vigour and height were much better for the higher inclusion rates for sludge,” he says.

The promising results are one indicator that sludge management may soon become an easier proposition. But Sharara is not suggesting that farm operators wait until the data rolls in to get a handle on sludge.

“With sludge, waiting increases the challenge. A lot of times growers wait until something is completely mature and widely adopted, but producers may have an immediate need, so seeking out assistance to create a compost system on-site, or a drying system, might be helpful to avoid a problem, or to avoid a complaint from neighbors,” he says. •