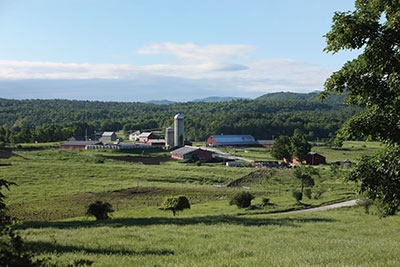 The view from a hillside pasture overlooking the main farm at Mountain Meadow Farms. Contributed photo

Dr. Amiel Cooper had dreamed of being a farmer. Seventeen years ago, while still practicing medicine in Boston, he decided to turn his dream into a reality. He and his wife purchased a small farm in South Newfane, Vt., along with 20 Charolais heifers and an Angus bull.

When Dr. Cooper later sold his first beef to a Whole Foods Market store, he realized there was a growing demand for organic beef and his dream began to grow. Two years later the Coopers purchased the approximately 1,800-acre farm they now farm on in Sudbury near Orwell, Vt., and he leases an additional 1,000 acres of cropland. Today Mountain Meadow Farms has at peak times a 900-plus herd, which includes 350 mother cows, and the farm is selling to 20 Whole Foods stores in the northeast.

Farm manager Brian Kemp says, “Everything we raise, we finish, and we supplement in some additional feeders to finish. Amiel never dreamed it would grow to this. Currently we have four full-time employees. Then in the summer, when we’re harvesting feed, we’ll have an additional three to four part-time help.”

Organic challenges
The farm is spread out over a few miles and consists of a main complex, a large mother cow facility for winter housing, and three feeding structures for the feeders, along with another leased facility for feeders.

Because Mountain Meadows is 100 percent organic, the farm raises all its own feed (hay, haylage and corn silage) with the exception of purchased organic grains.

“To be organic and GAP (Global Animal Partnership) certified for Whole Foods, all the animals have access to pasture during the grazing season, which here in the Northeast is typically from early May to early November.”

Some of these pastures were problematic, explains Kemp. “When I started working for Dr. Cooper seven years ago, the pastures were wide open, large areas and the animals had access to the streams and ponds. We have a tributary to Lake Champlain, called the Lemon Fair River, which actually starts in the boundaries of the farm. I could see that the situation wasn’t doing anyone any favors – the farm, animals or the environment. We had to get them out of there.”

Team effort
The farm began working with the NRCS (Natural Resources Conservation Service), the State of Vermont Agency of Agriculture, and the U.S. Fish and Wildlife Service, to find a way to keep the cows away from the water. Together they came up with a program that everyone was comfortable with that includes networks of pastures totaling over 800 acres, with 750 in tillable acres and the remaining 85-plus acres in woods.

“NRCS associate Keith Hartline, was instrumental in the design of the CREP (Conservation Reserve Enhancement Program), EQIP (Environmental Quality Incentive Program) and the implementation of several stream crossings,” says Kemp. “Over a three to four-year period, we started at one end of the farm and worked – right through the farm.” And because it was a team effort, Mountain Meadows shared the expense with the EQIP program.

Water away from the barns
Once the cows were fenced from the waterways, it led to another problem – access to water. Some of the new pastures were remote and far from any acceptable water source.

Mountain Meadows’s answer was to drill a 200-foot well at the top of a hill, where they also installed a solar system to pump the water. Water is now gravity fed to multiple livestock tanks in more than 5,000 feet of waterlines.

“It services almost 250 acres of pasture,” says Kemp. “We have a 5,000-gallon reserve at all times too, in case we get a couple rainy or cloudy days.”

Lagoons
About four years ago Mountain Meadows built two parallel 350-foot by 40-foot barns – as well as an outdoor yard – to house the mother cows for the winter. The manure runoff of this structure required a lagoon and a two-million-gallon earthen pit was put in.

“We run bedded packs in the barns,” explains Kemp. “Most of the liquid runs to the pit, and we scrape as necessary.”

The farm makes its own bedding by chopping up organic round bales and uses approximately 2,000 bales a year. The bedding is added daily, and the packs are cleaned out three to four times throughout the winter. The used bedding is stacked and is great compost to be used later on the fields.

Spreading
When it comes to spreading compost or liquids, Vermont has stringent manure management policies, with no spreading between Dec. 15 and April 1. Consequently, throughout the winter, the lagoons fill and the bedding stacks build up.

Mountain Meadows hires Whitney Custom Operating to do the bulk of the spreading. “We’ll top dress our hayfields during the summer out of the manure lagoons and in the fall, any of the compost we have we’ll spread and plow under for corn the following year,” says Kemp.

The farm normally uses a liquid manure spreader tank to transport the manure to the fields, but a couple of years ago they started using a dragline system, which they like better. The manure is pumped through a six-inch-diameter hose up to two miles away to one tractor with a spray nozzle mounted on the back. If needed to extend the dragline beyond more than a mile, they will add a second pump to the line to keep enough manure flowing to the tractor.

“Typically when we do that, we use an AerWay system to inject the manure into the ground as we’re spraying. We want to capture as much nutrient as we can,” says Kemp.

“The advantage [of this system] is we have predominately heavy clay soils, so compaction is a big concern for us, especially on a wet year. The big spreader tanks can cause a lot of compaction and the dragline eliminates that risk. You have one tractor out there. It’s less traffic up and down the roads. It’s less of a nuisance for neighbors,” says Kemp. “And that one dragline tractor can do the work of five or six tanks.”

Getting enough nitrogen
Mountain Meadows not only uses the entire contents of the two million gallon lagoon, it also uses the manure from four of its other lagoons (totaling four-million-plus gallons) and still pulls manure from a neighboring dairy farm.

“Our nitrogen source is manure, and it’s critical to us for growing crops,” says Kemp. “There aren’t a lot of supplemental nitrogen sources for organics to use. We do get some chicken manure compost from the large chicken farm and we use that predominately on our corn ground.”

Being organic also prevents them from adding any normal odor control additives to the manure pits. Only microbial products would be allowed. Luckily, odor hasn’t been an issue. The farm’s practice is to agitate the pits the day before spreading. They run one or two Houle pumps in the bigger lagoon to break up any crust and stir things up. So far, that’s working well. Manure samples are also submitted for analysis.

Text program
As mentioned earlier, Vermont has a fairly rigorous manure management requirement, and it can be a lot of work for farmers. In order to help farmers out, the local University of Vermont Extension Program is developing an app and Mountain Meadows has been working with them on a test pilot for the past couple of years.

“We can input data while we’re cropping in the fields,” explains Kemp. “It’s got a load counter for the numbers of loads you take off the field in bales or tons. You can input your manure. And, for a conventional farm, they can input their fertilizers and their pesticides and herbicides. And you can do it with your smartphone or an iPad right from the field.”

The app looks like it will be a success. “It helps us with our mandated Nutrient Management Plan (NMP) because we have all our data compiled systematically, and we can report to the state each year with that program.”

The bugs are still being worked out but the university is hoping to have the app available for purchase soon.

The future of Mountain Meadow
Mountain Meadow is considering conserving a large part of the land with the Vermont Land Trust. “They would buy your development rights, so it’ll always be in agriculture,” says Kemp. “We’re in a pre-approval stage at this point, pending on selling some of the development rights along that Lemon Fair River,” assuring this parcel will always be in agricultural use.”

Executives from the NRCS recently visited the farm to hear how the EQIP and CREP programs have been a win/win for the farm and land conservation.

“They have a hard time convincing farmers sometimes to do it, because the farmers feel like they’re losing land, and I didn’t look at it that way. Typically in these areas that we fenced off, they were wetter areas, not really prolific grazing areas to begin with. It helped us subdivide our pastures into more workable paddocks for rotational grazing, and it’s cleaned up the water quality, and we have trees growing and more wildlife habitat. We are currently working with Audubon Vermont on projects to enhance threatened bird populations.”

Because the land has improved, the farm is seeing high productivity in its animals as well. Calves are weaning at a heavier weight as a result of rotational grazing with their mothers. “Overall, cow condition going into winter is better than it used to be because the pastures are better throughout the year.”

Point of pride
Everyone at Mountain Meadows is proud of the recent national awards and being recognized for all the work that has gone into improving the farm and promoting the environment.

“We strive to be conscientious and grow a healthy and safe organic beef product to put into the market and be good stewards of the land while we do it,” says Kemp. “We’re starting to see some results from it, and it’s a great feeling.”