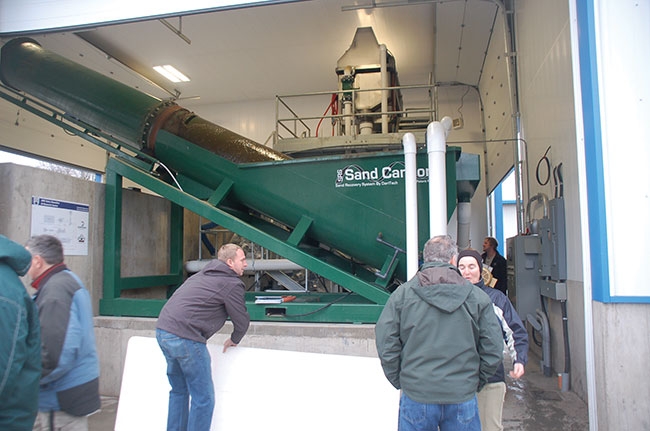 When Nelson Dinn, farm manager of the University of British Columbia Dairy Education and Research Centre in Agassiz, B.C., went looking for a sand separation system, he decided on the Daritech Sand Cannon manure separator system. by David Schmidt

From a cow comfort and cow health perspective, nothing beats sand for bedding. From a management perspective, however, sand has many significant challenges.

First, it is more expensive than sawdust, straw or composted manure. Second, it has no nutrient value so spreading it on the land is not an option. Besides, it is hard on manure spreading equipment and, later, harvesting equipment.

Many farmers use long settling channels to separate the sand from the manure. Not only does that require lots of land near the barn, but it is also difficult to reclaim the sand.

In recent years, several systems have been developed to separate sand from manure. Most use a lot of water and are therefore best suited to flush barns. So what can farmers with non-flush barns who still want to use sand do?

When Nelson Dinn, farm manager of the University of British Columbia Dairy Education and Research Centre in Agassiz, B.C., looked for a sand separation system to handle the slurry from the 400 animals on the farm, he had four requirements:

After looking at systems across North America, he found the answer just across the border in Lynden, Wash: a Daritech Sand Cannon manure separator system.

The system is very water-efficient, primarily using the liquid from the slurry to operate, says Dinn, the only water added to the system is that used to wash the parlor.

“We want to store nutrients, not water,” he says, noting the only time they added extra water was one day when a fierce wind “dried out the manure too much.”

The key to the system is a poly holding tank with three exit lines, two along the side at differing heights and one at the bottom. The liquid from the solids-liquid separator and the sand cannon are pumped into the tank, then removed through the exit lines after being given time to settle. The cleanest and clearest liquid accesses the highest exit line and is sent to an exterior holding tank. The liquid at the bottom, which contains any residue the separator has failed to remove, is re-circulated through the system. The liquid from the middle of the tank, which is free of residues but still dirty, is used to operate the sand cannon.

“The computer-controlled system only puts through as much new liquid slurry as is taken out of the holding tank,” Dinn explains.

To keep a solids-liquid separation system operating, the fiber screens in the separator need to be cleaned regularly. While most systems use water to do that, the Daritech system uses water once every six cleanings. The other five cleanings are done with bursts of air.

Except for the external fluid holding tank, the entire system is housed in a structure smaller than an average silage bunker. That includes the sand cannon, the holding tank, the solids-liquid separator, holding areas for the sand and solid manure, the computer control system and a small settling channel to remove the fine sand.

“The sand cannon works best with coarser sand so we still use a settling channel to remove the fine sand. Because most of the sand has already been removed we only need a tiny settling channel,” Dinn says, adding the amount of fine sand in the system is steadily being reduced over time.

“After just three months of use, we are getting almost 80 percent sand recovery and I expect that to be over 90 percent in the next few months,” he states.

There are several cost benefits to the system. Removing all the sand before the solids are applied on the fields is “easier on farm equipment,” reducing maintenance and replacement costs. But the biggest benefit is the cost savings resulting from not having to bring in a lot of fresh sand.

“A 1,000-cow dairy in New York using the system has been able to reduce their annual sand requirements to just two truckloads,” Dinn notes.

He believes those savings gives the system a payback of “less than eight years.”

Dinn says reusing the sand has not had any negative impacts on cow health at UBC nor at any of the other sites he visited. He notes one of the Michigan farms he visited while checking out the system was recently included in Hoard’s Dairyman’s list of dairy farms with the lowest somatic cell count in the United States.

Although the technological complexity might put off some farmers, Dinn notes the system is run off a single, simple PLC (programmable logic control) panel. The PLC panel can be accessed remotely, meaning support staff can “tweak” it without a site visit.

Although not a factor in Dinn’s decision to go with the Daritech sand cannon separation system, there is an added benefit.

A few years ago, UBC scientists developed a nutrient recovery system to remove phosphorus (struvite) from liquid manure. They recently built a pilot plant at Agassiz and say the liquid produced by the system is ideally suited for the recovery system.

“The clearer the liquid, the better it flows through our recovery system, explains UBC Department of Civil Engineering associate professor Jim Atwater, who is coordinating the struvite recovery project.

Farmers are anxiously awaiting results of that project as many fields in B.C.’s Fraser Valley are showing high levels of phosphorous. Some areas in Europe already place a limit on manure applications based on their phosphorus content and the same could happen here in future.

As a next step, Atwater says the liquid output from his system, now minus its phosphorus, could feed an anaerobic digester.

“Separated liquid manure run through a struvite recovery system generates the best input for an AD and might even eliminate the need to add outside feedstuffs,” he says.