The fall harvest is an especially common time for collisions involving ag equipment. How can operators bake safety into the culture? 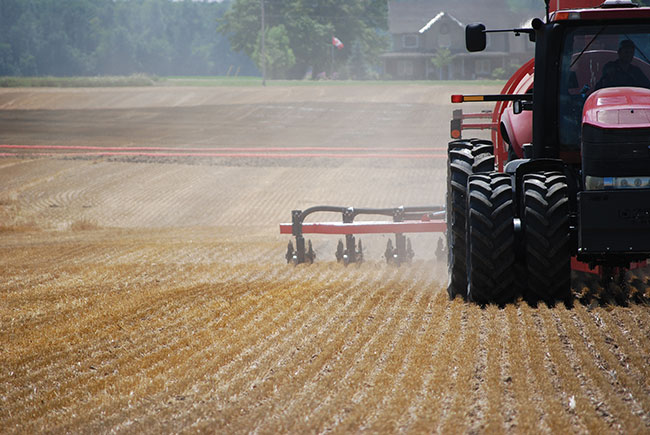 It’s a relatively common experience most adults are familiar with – going to the washroom at a mall, department store or fast food place and noticing a chart on the wall. At short intervals – usually 30 to 60 minutes – someone has signed the chart to indicate that the washroom was cleaned.

Walter Grose says if the retail industry can embrace such regularity and discipline, those transporting manure have to as well.

Grose serves as secretary for the Wellington Country Farm and Home Safety Association. He also sits on the Workplace Safety Prevention Services advisory group – meaning Grose isn’t just passionate about farming, but also about safety. He helps landowners and residents in the area informed on everything from ATV smarts to in-depth farm safety. And as farmers get deep into their fall harvest, Grose says there’s no time like the present to not only refresh your knowledge of safety practices, but also work with your team on developing thorough protocols and better practices.

When working with manure, safety is already a concern for a multitude of reasons – asphyxiation remains the leading cause of death related to manure handling (and, research from Penn State University suggests up to 25 percent of these deaths occur among young people), while pit deaths are also a concern. But Grose says an added layer of vigilance is required when one gets behind the wheel of a vehicle – whether it’s to spread manure in the fields or to transport materials down the highway.

According to a study by the Great Plains Center for Agricultural Health that looked at vehicles crashes in the Midwestern United States between 2005 and 2010, crashes occur most commonly in the September-December harvest season, when a total of 3,006 crashes occurred across the nine states studied (Illinois, Iowa, Kansas, Minnesota, Missouri, Nebraska, North Dakota, South Dakota and Wisconsin) over five years. In the year-round data, a total of 7,094 collisions involving 14,758 passengers were recorded, resulting in 161 deaths. Rear-end collisions were most common (22.6 percent of collisions), followed closely by same-direction side-swipes (17.8 percent).

The roads have changed
In part, manure transportation is also risky because one has to contend with other people, many of whom do not understand the risks involved in farming. Even if they are perfect drivers themselves, haulers have to contend with drivers who are increasingly likely to be distracted or in a hurry.

Steve Freeman, a professor of agriculture and biosystems engineering with Iowa State University, says the fall can be an especially concerning season for road safety because of the harvest. “Combines, grain carts, large grain trucks, [vehicles] turning in and out of fields – and field intersections are not always well marked.”

Rural drivers sometimes get impatient, says Freeman, because they “don’t always understand what drivers are trying to do.”

While Freeman says the biggest hazard related to manure handling will always be confined spaces – because in those situations it is common to see “multiple fatalities at a time,” there needs to be more attention paid to risks on the road. “Tractors and slurry wagons, when they are moving on the roads going from farmstead to the fields… there are some very crucial concerns.”

“A lot of this equipment is too large to really get it off the site. So they’re going to be blocking traffic.”

In particular, he says, when slow-moving vehicle are used in manure operation, the manure mess can pose a hazard. “It’s not a very clean operation, so blinkers or slow-moving emblems can get covered with manure and they’re harder to see for traffic.”

The most common types of crashes Freeman encounters are those in which the farming equipment is struck from behind – which can be caused purely by drivers not perceiving speeds well enough. “If a car is moving at 60 miles an hour and the equipment is going 15, sometimes they don’t recognize that difference quickly enough to slow down.”

The second-most common crash, he says, is when vehicles attempt to pass a piece of farming equipment at the wrong time. If the equipment operator is about to turn left, says Freeman, “They [the equipment operator] will have to swerve to the right a little bit in order to make that turn. So even if they have their left blinker on, as they start to move, drivers get impatient, they start to pass, and the piece of equipment turns because they have the right of way.”

It takes everyone to make roads safe, says Freeman. For ISU’s part, he says the school and extension do PSAs for rural drivers, but also work closely with farmers to do their own part.

“[If] they’re going to be blocking traffic, they need to move slower, they need to make sure that all their equipment is well-marked, and they need to communicate to rural drivers what they’re doing.”

Cheryl Skjolaas, agricultural safety and health specialist with the Center for Agricultural Safety and Health at UW Madison Extension says she sees similar issues in her state – year after year.

“It’s still the rear-end collisions and left-turn collisions,” she says. But she adds that traffic issues are worsening because the environment is changing. “We keep talking about the rural-urban interference. There’s not much of our area that is just rural anymore.” With more areas adjacent to farmland becoming recreational or tourism areas, she says, there’s more potential for more traffic and, thus, more problems.

Indeed, the GPCAH study found that about 70 percent of crashes involving farm equipment occur within rural zip codes, but 30 percent – not a small figure – occur in urban zip codes.

Being based in Ontario’s Wellington County, Grose is not far from mid-sized cities such as Guelph, London and Waterloo, and is only a short drive from Toronto. He says city drivers aren’t used to the pace of those driving farm equipment. “They try to get around them as quickly as possible, because they can’t waste a minute of their life.” At the same time, he says, increased volumes in traffic mean it’s harder for tractors and other equipment to get out onto the road – they have to “creep” out into traffic, which he says also poses a risk. 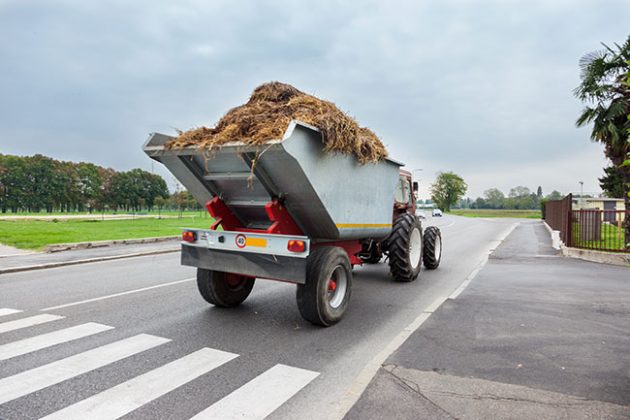 In a 2010 study, only 29 percent of passengers in farm vehicles involved in collisions used seatbelts, and some used no restraints at all.
Photo by Cristina/ADOBE STOCK

The times have changed too
Lifestyle plays a bigger role than ever, says Grose – compounded by the economic need to do more jobs with less time and fewer resources. “We have less people that are working on the farm because we can’t get people – the factories are getting them, the internet is taking them. We don’t have people who are interested in driving a tractor and working on a farm.” He says in an interest in simplifying jobs, farmers are taking one trip instead of two to transport equipment and material – which is creating larger hauls and thus larger potential problems.

“You have your drag hose, you have your pump, you have your pickup truck – you could end up 90 feet long,” he says. “Now imagine you have a small car trying to pass you.” He has also seen other drivers underestimating the length of the vehicle they’re passing. If they attempt a pass and another vehicle comes toward him, he says, “It’s almost impossible that a small car could get back in [to their proper lane] without having to crash into something.”

Skjolaas has also found in her discussions with custom applicators that operator fatigue is a large factor in many incidents. For example, she says, with trucks that move manure to frac tanks and dumpsters, the only three times the operators stop is to load, unload, or at a stop sign. “Out of habit, operators stopping at a stop sign reach over and absentmindedly flip the switch to open the valve.” Another observation, she says, is that the valve opening switch has been installed next to the jake brake switch, and when drivers approach a stop sign, they hit the wrong one. “Moving the switch, or putting a spring loaded cover on it, is being done to prevent this type of problem.”

Beyond operators who are inexperienced, overworked or tired, Skjolaas says they’re also increasingly distracted. “Distracted driving is a huge problem out there. When you look at the size and scale of equipment you’re dealing with, you’ve got a lot that needs your full attention, on the road or in the field.”

Laws and punishment differ between jurisdictions – in Ontario, where Grose is based, the first strike is $615; subsequent strikes can eventually result in the impounding of the vehicle. In Wisconsin, where Skjolaas is based, fines are relatively lower compared to neighboring states, but a texting offense could land a driver a fine of anywhere from $20 to $400 with a possible four points added to the driver’s license; violating the state’s general distracted driving law results in a fine of $173 plus four points to their license.

Checks and balances
Skjolaas says whether someone is working with tractors, trucks or other equipment, all plans and procedures should be written. There should be highly visible safety checklists that are integrated into daily routines on the farm. “Make it part of your daily plans so that equipment gets checked, that you have a record of it. Vehicle inspections are so important to show that you are putting the safest vehicle possible out on the road.”

She says ultimately, everything starts with knowledge. “One key thing to look at is having your operators prepared, your crew trained and have a schedule you can stick to so that you can encourage a culture to take breaks when you’re feeling that fatigue and address some of the health issues.” •