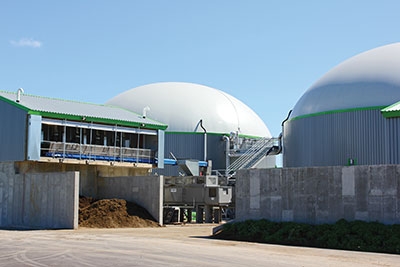 A total of $10 million will be spent by the University of Wisconsin - Oshkosh Foundation to own and operate a biodigester as well as a learning center at the Rosendale Dairy. Contributed

Oshkosh, Wisconsin, is best known for the clothing line, Oshkosh B’gosh, but the Oshkosh campus of the University of Wisconsin is hoping that it will also become known as a global leader in biodigester technology within the agricultural world.

That reputation recently took a giant leap forward with the launch of a new $10 million, 1.4 megawatt (MW) biodigester at the state’s largest dairy, financed and operated by the University of Wisconsin – Oshkosh Foundation.

Located at the Rosendale Dairy, owned by the company Milk Source, the biodigester will process 240 tons of manure per day from the dairy’s 8,500 cows, generating biogas burned as fuel in power production and a pathogen-free and nutrient-rich waste stream that is land applied as organic fertilizer. Some will be used on the dairy’s own farmland and the rest marketed at a discounted rate compared to commercial fertilizer to the dairy’s feed providers for use on their land. The 240 tons of manure mixture processed in the digester consists of 23 percent solids collected at the dairy and up to 58,000 gallons of liquid manure to attain optimum biogas production.

The foundation will collect the income from the sale of power from the digester, which is being sold under contract at 9.2 cents per kilowatt-hour to local power utility, Alliant Energy. Although the biodigester could produce up to 2.2 MWs of power, the foundation was only able to negotiate a contract for up to 1.4 MWs.

The facility, which began producing power last December, will also include a public education center and a research laboratory for use by UW – Oshkosh students and staff. The dairy is located about 25 kilometers away from the university campus.

But this latest investment in biodigester technology is only one piece of the puzzle at UW – Oshkosh. This project is the third digester constructed through a partnership, established in 2011, between Wisconsin-based biodigester technology company, BIOFerm Energy Systems, and the university. BIOFerm, a division of the German company Viessmann Group, won the bid to construct the biodigester at Rosendale Dairy, which consists of two cylindrical digester reactors, each with a one-million-gallon capacity. The reactors were constructed by Pipping Concrete, with the 80-foot diameter and 30-foot tall structures consuming about 2,000 yards of concrete.

The power generation system was supplied by 2G Cenergy and features a complete gas treatment system and an avus 1426 Jenbacher engine to generate power. The heat generated by the engine is used to maintain consistent temperature in the biodigesters, which is an important consideration since Wisconsin can experience very cold winter temperatures.

BIOFerm Energy Systems has also partnered with UW – Oshkosh in the construction of a dry-fermentation digester that opened in 2011 plus a small-scale biodigester, called the Titan 55, aimed at dairy farms between 100 and 400 cows. It is located on the Allen Farm about eight kilometers from the university campus and is rated at being able to produce about 55 kilowatts of power.

The Rosendale Dairy biodigester is capable of producing seven times more energy than the dry-fermentation biodigester, and will generate enough electricity for 1,200 homes.

“We would like people in the biodigester field or in the agriculture world, if you mention the word Oshkosh, to say ‘Oh yeah, I know about their systems’,” says Tom Sonnleitner, vice-chancellor for administrative services at UW – Oshkosh. “That’s what I’d like to see. If we can create this niche for Wisconsin, and not just for Oshkosh, then we’ve won.”

He adds the university is already attracting considerable interest from a variety of sources on how its biodigester technology might be applied in other circumstances, one location being a fishing community in Alaska. They are particularly interested in the small-scale biodigester technology using waste material from a salmon processing plant to produce biogas as a fuel source to generate electricity that would replace the expensive diesel they burn now to generate power.

Altogether, the three biodigesters are making a significant contribution toward the university campus’s goal of achieving carbon neutrality by 2025. It intends to use the carbon destruction credits it acquires from the Rosendale Dairy biodigester project as both an income source and a resource toward achieving that carbon neutrality goal.

“Beyond producing heat and electricity that meaningfully negate our campus’s carbon footprint, we view our fleet of biodigesters as living, learning laboratories for students, faculty and the communities we serve,” says Arthur Rathjen, UW – Oshkosh Foundation president. “And we are confident our digesters, as their production scales up and their impact becomes even more widely known, will draw agricultural, industrial, and other types of enterprises to our campus and region.”

The university was actually approached by Milk Source to help it address the odor complaints it was receiving from some of its Rosendale Dairy neighbors, and after a three-year-long careful and thorough review, the biodigester and learning center concept came together along with the financing.

“We’re not bioenergy experts but dairy and crop farmers,” says Jim Ostrom, Milk Source co-owner. “We spent several years looking for somebody who could fit the bill and we were lucky. We have one of the most forward thinking, professional organizations in the UW – Oshkosh Foundation just down the road from us and those folks have a very similar mission on sustainability, so I think it is a really great combination.”

The Rosendale Dairy is one of six dairies owned by Milk Source in Michigan and Wisconsin. It was co-founded in 1999 by Jim Ostrom, John Vosters and Todd Willer – each with multi-generational Wisconsin family farms. The Rosendale dairy was built from scratch about seven years ago at a cost of about $75 million.

Ostrom says there has been a strong desire, starting early on from area community leaders, for the dairy to install a biodigester to help reduce the odor emanating from the farm. It has been taking remedial action from day one on this issue, including covering lagoons and installing expensive manure management systems. The dairy uses sand for bedding and has installed a McClanahan sand separator to separate the organic matter from the sand so that it can be recycled. The organic material is processed through six FAN screw press separators to separate out solids from the liquid stream, and the liquids are processed further through a horizontal centrifuge to separate even more solids from the liquid stream. Ostrom says they use a highly controlled lagoon system where liquids are stored based on nutrient content.

With the installation of the biodigester and processing of a combination of waste solids and liquids from the dairy through the digester, Ostrom says there has definitely been a reduction in odor. The processed digestate is transported and stored within the dairy’s lagoon system and is land applied in spring, fall and winter as organic fertilizer.

“The nutrients are probably the second most valuable product that we sell,” says Ostrom. “Chemical fertilizer is very expensive these days and we have an organic form of fertilizer in the form of manure and it is probably better for the crops. It’s more sustainable and it’s better for soil tilt and organic matter. So we didn’t want to part with the nutrients but wanted to improve the product . . . what processing the manure through the digester does is change the crop availability of it and it drops the odor component of the manure modestly.”

He adds the dairy takes a sustainable approach to its herd management, matching the amount of feed the cows consume per acre of crop with the amount of manure returned to the soil to replace the nutrients lost by raising and harvesting the crop.

“The number one question I get is: ‘What are you doing with all the manure?’” says Ostrom. “The answer is that we only have enough manure for about 12 to 14 percent of the land within a 10 mile radius of the dairy.” The rest comes from other dairy farms or chemical fertilizers from other parts of the world.

“To be able to get the nutrients they need four of five miles down the road is a win for the local crop farmers, a win for the crops and it is sustainable for cows,” says Ostrom.

Rosendale Dairy has leased the site for both the biodigester and learning centre to the UW – Oshkosh Foundation, and has installed a piping system from its manure collection system to supply the biodigester.

In addition to production of biogas and odor reduction, another benefit from processing manure through a biodigester is the environmental benefit of decreased phosphorus and nitrogen run-off.

The learning center, which is currently in the planning stages, will function as an extension facility to programs such as microbiology and environmental engineering offered at UW – Oshkosh, with a major dividend for the biogas renewable energy industry and agriculture sectors being that the campus is delivering graduates who have an understanding and applicable training to work in this growing industry. In fact, graduating students are finding jobs within this sector. It will also serve an important educational and public relations role with tours for kindergarten to Grade 12 students.

Ostrom says having the learning center located at the dairy is an important part of what Milk Source wants to accomplish in its messaging to the public.