Features Gas safety Safety Storage safety
Risks inside and out 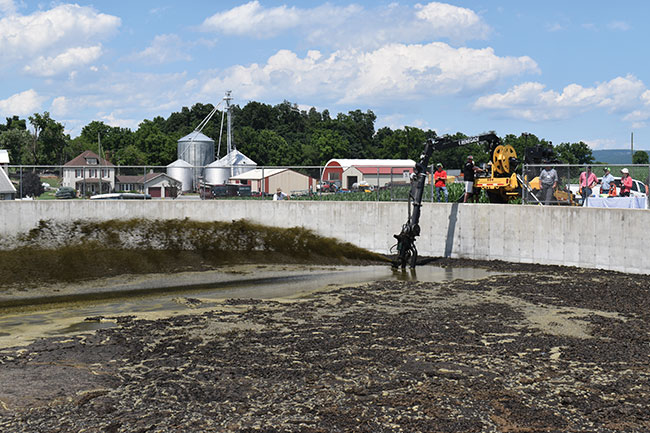 An agitation event takes place during a Pennsylvania demonstration, where educators spoke of how gases and odors are dispersed through open air. PHOTO COURTESY OF Stefanie Croley.

When it comes to manure safety, one of the major areas of concern is asphyxiation. Injury and death can occur when a person is in close proximity to manure when levels of hydrogen sulfide (H2S) exceed the hazardous concentrations. Naturally, this occurs most commonly in confined spaces, such as below-grade containment structures.

However, a small number of incidents in recent years including a fatality near Amherst, WI has experts concerned about the risk of asphyxiation in outdoor settings as well. While asphyxiation risks are significantly lower in outdoor settings as open air allows gases to disperse, the risk is not zero – and serious outcomes and even death can still occur. A team at University of Wisconsin Extension secured funding under the USDA NIFA Foundational Program CARE to launch a study to identify strategies to reduce human health risks from exposure to manure gases containing hydrogen sulfide. The study looked closely at exposure to gases containing hydrogen sulfide in outdoor settings both during agitation events and on days without agitation, and how gas concentration varied in various weather conditions.

The study was recently completed, with most of the data analyzed. Rebecca Larson, associate professor and extension specialist at the University of Wisconsin-Madison, and a team of researchers including Kevin Erb, director of the extension division’s conservation professional training program, now have more data on what factors pose a greater risk to human health in outdoor settings.

Larson says in the past, many professionals in her field had been primarily concerned about risks in confined spaces. And while confined spaces still pose the greatest risks, she says those in the safety world are now looking at amplified risk factors outside. “I think we always knew some releases were happening during agitation,” she says. “Now we know, maybe a certain amount of time it’s not concerning, but there are circumstances even in open spaces where it can be an issue.”

How agitation can cause issues outdoors
Larson says the industry has always known that emissions are greater during agitation – but how much of a risk they pose might have been underestimated. Overall, she says during the study, days during which agitation occurred were the biggest concern. “There were certain circumstances where we didn’t get any events with high concentrations of hydrogen sulfide, [such as] earlier in the season, in the springtime,” she says, adding that’s not to say it is not possible. “Only during agitation and during the warmer parts of summer.”

While agitation systems that can be controlled farther away from manure storage – such as boats – are popular these days, most operators are still using systems that require them to be close to the pit – the highest-risk location.

Agitation causes the release of gases in a way Erb compares to a burp. “The movement of the liquid causes the gases to come out of suspension,” he explains. “You start agitating and the manure storage will ‘burp.’ There will be this burping release of pent-up gases.”

How likely those gases are to harm humans depends a lot on weather conditions. Some conditions will keep gases closer to the ground and make their dispersion much slower. Temperature is likely the biggest factor, says Larson, with warmer temperatures posing the bigger risk as they can increase gas production. Additionally, temperature inversions – when a layer of warmer air sits above a layer of cooler, denser air, trapping it – can also increase the risk.

Larson says the research has been most focused on the U.S. Occupational Safety and Health Administration (OSHA) standard, as there are not many other standards for H2S in an agricultural setting. OSHA has a ceiling of 20 PPM for H2S, with a 50 PPM peak above that. Larson says there were “absolutely” times during their study during which the 20 PPM ceiling was hit outdoors. Of the 20 days in the field, more than half of which were non-agitation days, Larson says there were three to four days in which those numbers were hit.

Wind also affects dispersion, where higher winds can encourage the transport of gasses reducing concentrations locally. Larson says the team is still examining the exact figures to know what magnitude of wind will pose the highest risk. There is no clear indication of a correlation between humidity and increased risk to human health.

Other indoor risks
While the study looked at risks in outdoor settings during agitation events, it also took into account processing facilities – on-farm, indoor facilities that both Larson and Erb say were not as common even a few decades ago.

These buildings often house tasks such as sand separation or solid separation. “People started designing contained systems where equipment was not exposed to the elements all the time,” says Larson. “We didn’t have a ton of manure processing two decades ago.”

Erb says with more farms installing technlogy such as sand and solid separation, there are simply more places and situations to consider when looking at gas safety. “The only place you really thought about manure gases [before] was the small reception pit where it was pumped to the lagoon.”

Building design elements that take air circulation into account could go a long way in these settings, says Larson. “There are design standards for how many air exchanges you want to target, [or] air exchanges per hour. Having none, or not providing that adequate ventilation is very dangerous.”

Beyond the environment
The properties of the manure itself can also affect the amount of risk.

Erb says there may be a bigger concern nowadays in part because the manure itself is different. “How we’ve fed the cows has changed,” he says. “Thirty years [ago], cows had corn silage, they had hay or haylage and maybe a mineral mix. Now, you have a lot of byproducts being mixed into beef and dairy rations.” He says this can impact the type of bacteria that can generate gases.

Agitating when manure temperatures are lower will reduce risk. Previous research shows that manure colder than 64F (18C) greatly reduces H2S emissions (Andriamanohiarisoamanana et al. 2015). Although, like all other safety factors, temperature alone is not a guarantee of safety. Other factors with the manure include sulfur content and pH. As the pH of manure decreases, more of the dissolved sulfide is in the form of H2S). While increasing pH may reduce H2S emissions, this could be difficult to achieve in practice due to the cost.

Overall, says Erb, there are always economics to consider. For example, while some feed will result in manure that gives off fewer H2 S emissions, that might not necessarily work for the budgets of the farm. “If you have two feed options that do the same thing that are similar in price, you can alternate one to the other,” he says. “If it’s economical, consider using that lower sulfur feed.”

The solution is simple
While all the data is helpful, Larson and Erb say there’s a bit of irony at play. “In the end, I like people to understand that there are a lot of meteorological factors that can go into this, but how often do people actually know [for example] the wind speed?” asked Larson, who also pointed out that weather events like inversions are often not something most people can easily pick up on simply by stepping out their door. In the end, says Larson, it’s best to be armed with the right personal protective equipment at all times, not only because it’s hard for humans to know the exact weather conditions, but also because those conditions can quickly change.

Larson recommends wearing a hydrogen sulfide monitor during all indoor activities, as well as outside when agitating, particularly on days that are higher than 59F (15C).

Some operators experience what those in the industry call “alarm fatigue.” Erb says it’s true that the alarms tend to go off at a rate that might bother those wearing them. “In any other industry, when [an alarm] goes off, you leave the area and don’t go back until it’s safe,” he says. “In agriculture, the tendency seems to be, ‘I’m going to finish this task, and then I’m going to leave.’ They’ll silence the button and keep going.”

But Erb and Larson say it only takes one instance of ignoring an alarm for something devastating to happen. Larson says education with employees remains key. “The fact of the matter is, protecting yourself with a monitor is the most important thing,” she says. •