Research being conducted by Agriculture and Agri-Food Canada into feedlot emissions is helping to develop new measurement technology.

November 15, 2017  by Agriculture and Agri-Food Canada 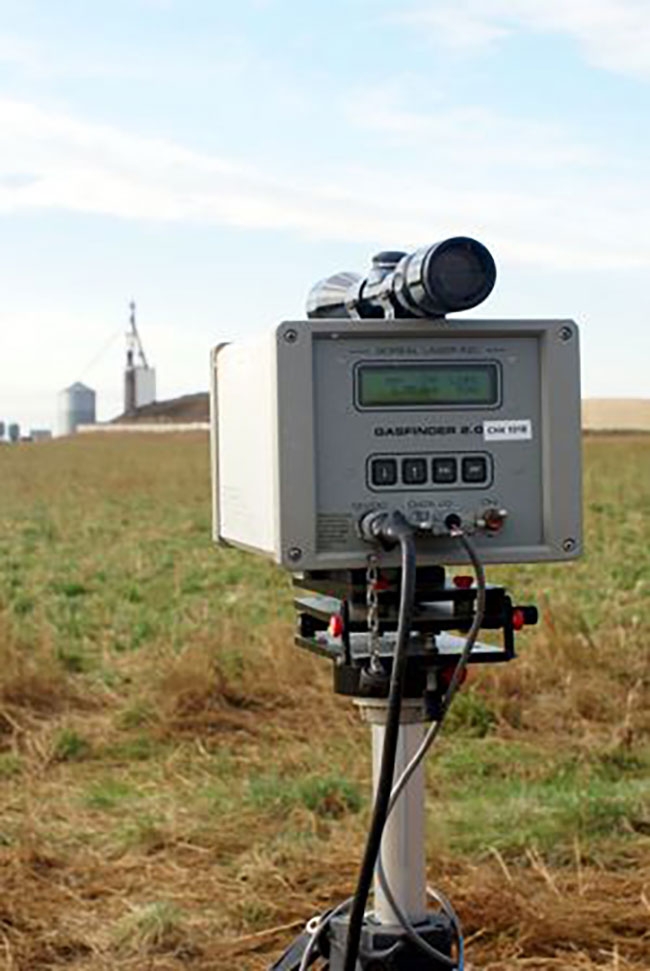 Innovative research is reshaping what is known about ammonia and related emissions from feedlots. And that new knowledge may help the industry to adjust its management, shape and react to public policy more effectively.

“Livestock are significant emission contributors,” says Dr. Sean McGinn of Agriculture and Agri-Food Canada, a long-time researcher in the emissions area. “That’s quite clear and generally recognized by the agricultural research community.”

Fifty to 60 percent of feed nitrogen is lost as ammonia at the feedlot. Eight to 10 percent of Canada’s greenhouse gas emissions are from agriculture and 90 percent of the atmospheric ammonia comes from cattle manure. Ammonia in the atmosphere is an economic loss because the nitrogen fertilizer potential of manure is lowered. And it’s a health hazard. Ammonia mixes with acid to form fine aerosols, the white haze seen in confined airsheds.

That’s what McGinn and Dr. Tom Flesch (University of Alberta) set out to understand. Backed by funding from the Alberta Livestock and Meat Agency (ALMA), a two-year project investigated the fate of nitrogen in feedlots, what amount is deposited on land downwind and how much is carried long distances.

The other part of their research involves measuring methane and nitrous oxide, two prominent greenhouse gasses. Methane is produced by cattle due to the anaerobic digestion of feed in the cow’s rumen and both nitrous oxide and methane come from stored manure in the pens.

The research produced significant results on several fronts from techniques to measure on a commercial scale, to new information on transfer, deposits and re-emission to nearby lands, to related opportunities for mitigation and management.

One positive outcome was the development of new measuring technology adapted from what has been used successfully for measuring flare emissions in the oil and gas industry.

Using open path lasers that move over the feedlot and calculate concentration and wind characteristics, the system is able to measure emissions regardless of wind direction.

This new technique evaluates the feedlot as a whole, which means it can consider whole-unit management aspects that impact emissions. Also, by keeping animals in their natural environment and not interfering with them in any way, the laser approach promises more accurate, commercial scale results.

This means actual feedlot emission numbers can be used in greenhouse gas assessments, an improvement from past practices of using estimates from global sources.

One of the surprises learned from this study was the fact that a significant fraction of ammonia was deposited on land adjacent to the feedlot and, once deposited, how much was reemitted into
the atmosphere.

“Our results illustrate the dynamics of reactive ammonia in the vicinity of a beef cattle feedlot,” says McGinn. “It confirmed that a large portion of the nitrogen fed as crude protein is volatized from the feedlot’s cattle manure. In the local vicinity of a feedlot, both ammonia deposition (14 percent of the emitted ammonia) and reemission occurred. That 14 percent is a large amount considering a typical feedlot emits 1-2 tonnes of ammonia per day.”

There was a change in the soil-captured ammonia that decreased with distance from the feedlot (50 percent over 200 m).

Logically it follows that quantifying the local dry ammonia deposition to surrounding fields is required when applying feedlot-based emissions to a large-scale emissions inventory, says McGinn. Failure to do that could mean badly misrepresenting
the situation.