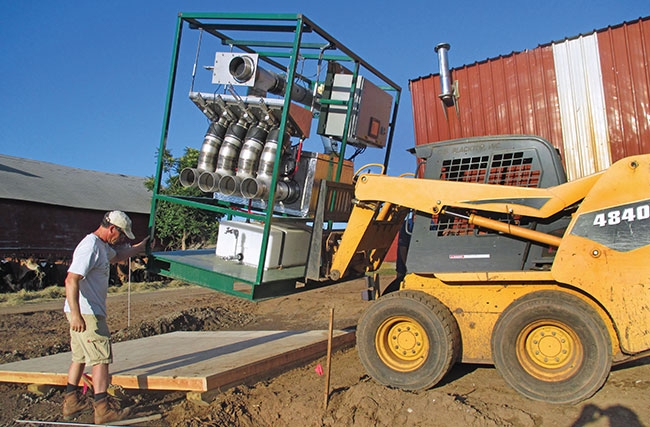 The Agrilab Technologies Hot Skid 250R unit is moved into place within the new composting site established at the Collins Powder Hill Farm.

The technology allows atmospheric air and hot vapor to be sucked through compost piles resulting in more active microbes that make the conversion of raw manure to compost possible. Equipped with this technology, Collins Powder Hill Farm is now able to produce quality compost in three to six months versus two years.

The dairy located near Enfield is owned by Jack and Mavis Collins, along with their son, John, and his wife, Ashley. In total, the farm looks after a herd of 183 milk and dry cows, heifers and steers, and they also operate The Collins Creamery, which sells premium ice cream. Composting their dairy barn manure is a venture that they started way back in 1992.

They clean out their barns twice daily and up until recently, have placed the material in windrows in a designated area for composting. The mixture is a combination of sand and manure from the milking barn and manure and wood shavings bedding from the calf barn. In the fall months, they also have seven landscapers who bring them leaves to blend into the mixture.

Essentially, composting is their manure management method, with most of the compost used as organic fertilizer on their 250 acres of owned and rented feed and cropland. However, a portion is bagged or sold in bulk as a commodity. In total, they produce about 4,000-cubic yards of compost annually.

In 2017, Ashley Collins discovered an energy efficiency funding opportunity being offered by Connecticut’s Resource Conservation and Development Farm Energy Program (CFEP). The farm applied for a grant and were successful. They became a pilot site for CAHR technology developed and commercialized by a Vermont-based company called Agrilab Technologies Inc. The project featured their Hot Skid 250R unit.

Funding for the project was provided by Connecticut Resource Conservation and Development and the Connecticut Farm Energy Program, through a grant received from the Connecticut Department of Energy and Environmental Protection (DEEP), through a United States Department of Energy grant.  The Collins’ only cost was for site materials and labor for building the compacted gravel working pad. Detailed analysis of the CAHR process by CFEP staff occurred for a year from July 2017 to July 2018. (Their detailed findings are available at CTFarmEnergy.org.)

One major difference between the CAHR composting production technology and conventional composting is that there is no windrow turning involved.

Jack says that with the unprecedented amount of rain that the Enfield area has experienced recently, one lesson they have learned is that this compost conversion system works better and faster in a covered environment.

“Last year, it worked really slick and we were getting 125-degree water in the milk room siphoned off the heat recovery system,” he says. “This year, if we get 75-degree water, we are doing well, but we have had an awful lot of rain. We got eight inches of rain in April. Also, both the leaves and horse shavings came in wet.”

So, they are strongly motivated to place a cover over their composting set up.

“If we ever did this again, we’d want to put a building over it,” Jack says.

One other important lesson they have learned is that having sand as part of the mix is probably diminishing the full potential results that can be achieved with this system, because sand doesn’t compost.

“Having said that, it seems that if we put enough of the wood shavings so that the mixture is light enough to draw air through it, the system works,” Jack says. “Our bagged compost is almost all leaf compost and cow manure. The bulk stuff gets a bit less of the leaves.”

Given their experience as composters, they have developed and follow specific recipes of approximate measures of raw materials that they know will produce quality compost.

On its own, the entire Agrilab Technologies CAHR unit and accompanying infrastructure such as piping costs about $110,000 (USD). A cover over the operation adds another $50,000 for a total cost of about $160,000.

The Agrilab Technologies Hot Skid 250R unit is moved into place within the new composting site established at the Collins Powder Hill Farm.

With the ability to produce compost in one-quarter to one-third the time, this significantly reduces the time horizon for system payback. With the ability to compost faster, this opens the door to possible farm expansion if manure can be disposed of by conversion to compost at this significantly reduced rate. Furthermore, there is potential to expand composting operations if a finished product can be produced and marketed more quickly, offering an opportunity to boost on-farm income. Also, generating more compost for use as organic fertilizer on cropland can offset the cost of commercial fertilizer.

In addition to accelerated compost production, the Agrilab Technologies CAHR system offers heat recovery from heat generated during composting. For example, this system generates heat of over 130 degrees Fahrenheit (F) from the compost piles. With fresh batches of compost, the system has hit peak temperatures of 160 degrees F. It can be channelled for use to heat dairy process water and to heat buildings, thereby offsetting fuel costs. It also has the capability to scrub composting off-gasses, which avoids complaints from neighbors. In Connecticut’s climate, the Collins Powder Hill Farm experience shows that it is possible to stagger compost production and produce compost year round.

Jack says that he has witnessed that it does accelerate the composting process and that the heat generated from composting has offset diesel fuel costs and labor, while providing heat for both buildings and process water.

Agrilab Technologies’ CAHR system has been around for a while, with research and development conducted in both the U.S. and Canada. Its first system featuring sucking air and hot vapor through compost piles, or what it describes as ‘negative aeration’, as well as its Isobar heat exchangers, was installed at Vermont’s Diamond Hill Custom Heifers in 2006. Since then, the technology has been refined, and in 2015, the company launched a standard product line of modular CAHR systems, which it says meets the needs of most farms and commercial operations.

The pilot site at the Collins Powder Hill Farm consists of a geo-textile and compacted gravel and sand floor as well as walls on three sides measuring four-inches high constructed with concrete blocks. It also contains duct work consisting of eight perforated eight-foot plastic pipes to draw the air and hot vapor from four separate compost heaps. The pipe spacing was designed to match their loader wheel base. It is used to add and remove material. Wood chips were placed over the pipes to aid in air filtration. Placement of the raw manure on the wood chips in each of the four composting zones was timed so that each followed a different maturation timeline, thus providing sources of compost at various stages of completion at various times of the year.

The Hot Skid 250R unit itself is on a custom steel pallet skid measuring four-feet wide, eight-feet long, and seven-feet high. It weighs 1,400 lbs, and comes with six-inch hoses for compost aeration and exhaust connections.

A three-phase connection provides power to the two-horsepower blower, capable of blowing in the range of 100 to 500 cubic feet per minute (CFM). Power is also supplied to the composting unit’s circulator pump and computer control panels. In the case of the Collins Powder Hill Farm, their power costs for this unit were about $300 per year. Air flow can be adjusted manually or with feedback controls. Sensors within the compost batches provide temperature, oxygen and air flow feedback so that the farm can adjust to ensure that compost conversion is taking place within the optimum range.

The Hot Skid 250R unit is capable of sucking air and hot vapor through four compost piles, rotating from batch-to-batch through a series of timed air flow and rest intervals for good compost production. To capture the heat, the hot vapor is drawn through its heat exchanger.

“The hot vapor experiences a phase change, essentially condensing into liquid, while transferring the heat into a water and glycol loop,” says Brian Jerose, owner of Agrilab Technologies Inc. It is the heat in this loop, similar to a solar thermal or geothermal system, that provides the heat. It is most often transferred to a hot water boiler for process water and to heat buildings.

“We specify the loop. Sometimes it needs to go 50 feet or sometimes 400 feet to where the heat is going to be used,” Jerose says. “The compost heap is the heat source.”

An aeration fan expels the returning vapor to the air through an exhaust manifold. In cases where odor could be an issue, it can be scrubbed through a biofilter.

“One of the advantages of our system is that we have the ability, with timer-controlled valves, to re-direct that hot vapor back into batches of compost,” Jerose says. “That is particularly advantageous in winter operations, to push hot air from one of our active batches to cold materials to provide it with a thermal jumpstart. Once the biology is stimulated, it starts to generate its own heat to sustain itself.”

The farm collects and temporarily stockpiles its manure daily, using it to start a new compost batch once a treated pile is deemed mature and is removed.

“A smaller farm, and I think the Collins farm is one example, would likely be on a 12-week cycle on average,” Jerose says, “so with four compost piles being processed at a time, they would be loading a new batch about once every three weeks.”

Collins Power Hill Farm had the option of purchasing the system for a dollar once the pilot was complete, which they did and it has become their composting system. Jack says that he is quite intrigued with the technology.

“It really is quite an ingenious system,” he says. “We can make compost quicker, we have saved a lot by not having to turn windrows in the field, and it was pretty neat how it heated both the milk room and
milking parlor.”

Customer reflections
Foster Brothers Farms in Middlebury, Vt., purchased a Hot Skid 250 R in 2017. The farm has a milking herd of 440 head, and has had the state’s largest composting facility, called VT Natural Ag Products (VNAP), since it started up 27 years ago. VNAP processes dairy, poultry and horse manure, forestry residuals, source-separated food scraps and other biomass into various manure and soil products. The farm received the U.S. Dairy Sustainability Award in 2016.

“We purchased the technology to dry our compost and heat the bagging facility in the winter,” explains president Robert Foster. “Having it in place has sped up our composting process by at least 50 percent, from an average of four-and-half months to about two-and-a-half months. Our windrows only have to be turned four times as opposed to 15 or 16 times. And the data logging allows us to prove we meet the temperatures required in the organic compost standards.”

The processing time reduction and labour savings add up to savings of about $7,300 a year. Annual heating oil, propane and diesel cost savings are calculated at $17,205.

“It allows a lot of flexibility in how you can manage the composting process,” Foster says. “We can take the warm moist air from an established pile and move it into a new pile, and if that new pile is cold, it cuts the time it takes to get the temperature up from ten days to two. It’s all controlled from a smart phone. We are still learning what we can do with the system.”