Adding manure to the circular economy. 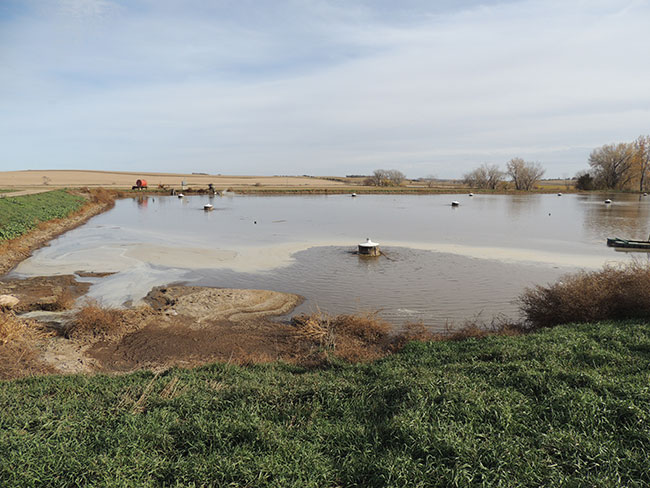 Manure Manager recently interviewed Karen Schuett, co-founder and CEO of Livestock Water Recycling (LWR). The company focuses on livestock manure management and recently made headlines as the winner of the Nutrien-Radicle Challenge, an agricultural pitch competition held in Saskatoon, SK. In this interview, Schuett shares where the idea for LWR came from, how it can help the manure industry, and her own hopes for where the manure industry can go.

Tell me about yourself and your background in the industry.
My co-founder [Ross Thurston] and I have been working together in water treatment for 25 years. I’m a biologist ecologist and he’s a chemist, and we started treating water in hydrocarbon contaminated groundwater. And through that industry, learned a lot about the treatment of contaminated water. About 10 years ago, we were asked to help some local farms with some water treatment problems they were having with lagoon runoff. We got very engaged in that aspect of water treatment, and we were really inspired to bring what we had learned in other industries of water treatment into the agricultural industry. With that, looking at it with a fresh set of eyes from another industry, allowed us to tackle the manure problem with a different, fresh perspective.

How did the idea for Livestock Water Recycling’s system come about?
A local hog farm in Alberta had an excursion out of the lagoon, and we were working at that time doing some construction dewatering projects. It looked to us like another dewatering project. So, we thought we could bring some of the same tools that we were using when there is water coming off industrial sites and take that to manure sites. But manure definitely didn’t behave like that at all. We were treating silt and sediments and the manure is very different from that. But we just got hooked on the idea of it being a complicated problem that was something that we could create value from.

Can you explain the technology in layman’s terms?
It is a skid-mounted system that is installed on each farm. It is a series of processes that the liquid goes through to remove out particles as it goes. We start with removing the largest particles, and those are the organics nutrients: organic nitrogen and phosphorus. When we pull out those big bulk solids and we dry them, they can be used as a really good organic fertilizer.

Then we have another stage of the process that filters out the smaller micronutrients – those are really healthy for soil. Those inorganic nitrogen, potassium, calcium, magnesium, really good, healthy regenerative nutrients for soil. At the end of the fourth stage process, we have clean potable water. That water can be used for animal cooling, for flushing, cleaning and then of course for irrigation.

Do you have anything that explains the composition of the output?
Yes, we do have assessments. We take lab analytical of all of what we produce and depending on what’s going in, of course, is what comes out. But we concentrate a stream into, if we say it’s 100 percent, eight percent of it goes into that solid form, 17 to 20 percent of it goes into that liquid fertilizer and then the rest, 70 to 75 percent goes into clean water. That’s how it normally breaks down on a site. We see over 90 percent of the phosphorus gets pulled out as a solid. The nitrogen is split between a solid and liquid fertilizer, and then over 90 percent of the potassium, calcium, magnesium, goes into that liquid.

How has on-farm experience affected the system’s design?
Originally, we were thinking we were going to clean water and that fresh water would be really helpful for on-farm use. And that we would reduce the freshwater withdrawals that agriculture was in the news for using up. When we started working with commercial clients, they taught us about actual manure nutrients themselves.

By separating out the solids and segregating out the phosphorus from that waste stream, or what was traditionally called a waste stream, they were able to reapply it back on their farm. A specific farm I can mention in Wisconsin, he was able to increase his seed crop growth by separating those fertilizers, and then precision applying them when he needed to, rather than just flushing manure when the lagoon was full. We didn’t realize that he was going to have that much of an increase in seed crop growth. Naively we thought he was going to clean water and that would be very helpful and it was, but he taught us all about that application of nutrients and what can be done when they are separated out like that. He also has taught us a lot about what can be done on farm with his water to help his herd health. He’s really able to keep just the cleanest farms we’ve ever seen and flush with the clean water. His animal care and herd health has been outstanding. 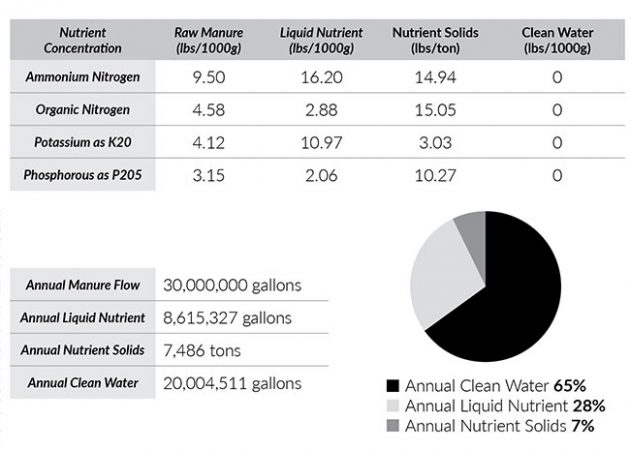 LWR does assessments where a lab analysis is taken of the system’s output. The above example is for hog manure. Photo courtesy of Karen Schuett.

Who are your main users?
Right now, we are working on hog and dairy and anaerobic digester locations, mainly large facilities and large farms. We see the best return on investment (ROI) is for a farm with more than 400 to 500 cows and about 3,000 to 4,000 pigs. I think the smallest one has over 700 cows. The largest is probably in the Middle East. They have our largest system that is over 2,000 cows but we’re also treating their processing water as well.

But, of course, it all depends on what your objectives are, what your goals are on your farm and what your costs are before you go in. So, on that larger farm, it’s more difficult for them to spread the full amount of their nutrients and find land for spreading what they have. What we’ve seen is that for farms that want to increase their herd size, they can do that on the same amount of land by adding our system. They can do that without adding a new lagoon, and instead, process everything through our system.

You are Canadian but there are no Canadian systems?
We did all our original research and development and pilot testing in Canada, but we’ve seen the biggest uptake from farms in the U.S. Right now, we’re seeing the hugest amount of pull market from the European Union.

What has been the biggest barrier you’ve seen that prevents customers from taking on the system?
Originally, it was getting the technology on the farm so people can see it running and see how it created value. Now that we’ve gotten past that hurdle, the biggest problem I think all farms are facing is the commodity market. The price of dairy is really impacting people. Our real vision here is to help diversify that economy by helping reduce the cost of their manure management and also give them the ability to create additional revenue sources through their manure by selling it into fertilizer market and selling into the renewable natural gas (RNG) markets. We’re hoping to create better profitability on the farm.

What’s the biggest challenge the manure industry is currently facing?
I think the public perception is the biggest issue. Part of our messaging is to say this is a way to take the manure and not treat it like this terrible waste product emitting greenhouse gases, but as the greatest fertilizer that’s regenerative and natural and helpful for our crops – if the value of it is unlocked from the lagoon treatment. We see massive reductions in greenhouse gas emissions through processing through our system and that can change the whole messaging around manure.

How do you hope to see the manure industry change?
What we’re trying to talk about is to go lagoon free on food production. To try and step away from that old model and move to a manure processing model, where we immediately process and package the manure so that it has its fullest potential realized in all of those ways: fuel, food, fiber – increasing the value of the farm completely by moving it out of the lagoon.

I just part of a panel on ag tech and the event centered around thousands of young people talking about environmentalism, innovation and the future of food. It was so exciting because they can really get behind this idea of unlocking value of traditional waste products through a reuse and recycle model. My messaging was that manure is one of those things that we can unlock the value of. So, for everyone in food production to get behind the messaging that ‘we’re going to realize this value, we’re going to do as much as possible with this manure, and then tell the story of how we are doing it.’ I always say that farms are the greatest environmentalists, they live on that land. [The farmers] love it, it’s their legacy and they do tons of regenerative things for it, we just need to spread that message.

Livestock Water Recycling recently won the Nutrien-Radicle Challenge (an agriculture business pitch competition). What are your plans for the future?
With our tech, it’s a small system that gets on the farm but the biggest part of development that we’re working on right now is just around a digital footprint of manure and digitizing how the manure looks on the farm. This is so farms will have that digital footprint of their macronutrient value, their micronutrient value, their volatile solids, and so on, and have a full footprint of what they have to offer the marketplace. But we’re just trying to get that digitized in a way that they can interact with people in [ag companies], with big RNG groups, with the energy market.

Do you have any hopes for the future of the manure industry as a whole?
None of us can really control commodity pricing, or control feed/crop pricing, but what we see is that lagoon-free world. Where we say, you know you no longer have to deal with manure in that old-fashioned way, and we can do this in a way that makes dairy and food production back on the top of everybody’s list as far as things that we have – the best of all of us – to feed the planet. We need to do more with less. And if anyone knows about how to do that, it’s our farms.

Editor’s note: Parts of this interview were edited and condensed for clarity.