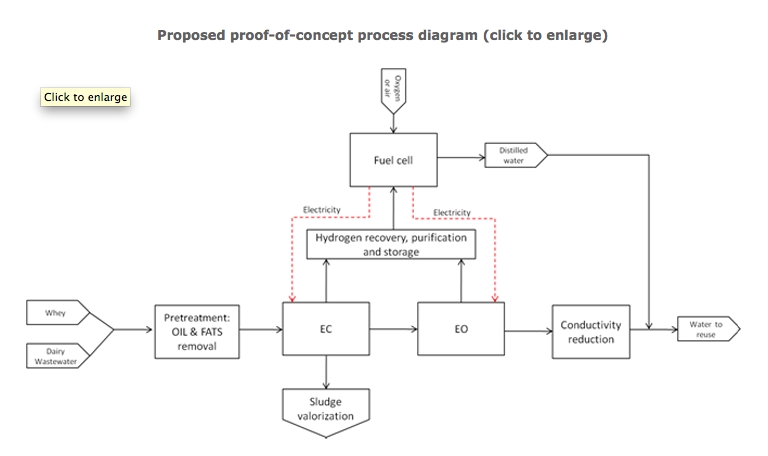 Jul. 17, 2013, Stuttgart, Germany – In an EU-funded project, the Fraunhofer Institute for Interfacial Engineering and Biotechnology IGB in Stuttgart is developing, together with industrial and scientific partners, a modular system to purify dairy wastewater electrochemically. Using an integrated fuel cell, the generated hydrogen will be recovered to supply power to the system.

The wastewater discharged from the production of dairy products such as cheese, quark and yoghurt typically contain lactose, proteins and milk fats, as well as surfactants and disinfectants from cleaning the production plants. Cheese production also results in whey, a watery solution, which besides milk proteins contains mainly lactose. The disposal of this wastewater is very cost-intensive due to the high chemical and biological oxygen demand. Large dairies typically treat their wastewater in large-scale biological wastewater treatment plants. However for many, especially small and medium-sized enterprises, the investments in such solutions are prohibitively expensive.

In the EU-funded project REWAGEN, a project consortium with business and research partners – led by the Fraunhofer Institute – is developing a multistage process for the efficient electrochemical treatment of dairy effluents and whey. The modular design will make it possible to adapt the system flexibly to the varying amount of wastewater at smaller dairies. “Here, the various steps in the process are combined and integrated into a compact system. The aim is that each step in the process should provide a substance flow that can be further processed or fed back into the system,” explains Alexander Karos, Project Manager at the Fraunhofer IGB. The purified water can be re-used directly, for example to clean the plants.

The hydrogen generated as a by-product from the electrolysis of the water will also be used – to supply the plant with electricity. “We want to separate and purify the hydrogen so that we can use it in a fuel cell to supply power to the system,” says Karos, describing the new approach.

“To purify the wastewater we favour electrochemical processes because, in this way, we can prevent the addition of chemicals and the related increased salinity of the water,” Karos points out. To achieve this the researchers aim to combine four different electrochemical processes. In the first step, oils and fats will be separated using the process of pulsed electrocoalescence where dispersed droplets of oil move around in the alternating electric field due to their surface charge and merge to form larger drops of oil that can be separated mechanically. Particulate impurities are separated in the subsequent step by means of electroflocculation. “Here we make use of iron electrodes that release iron ions into the water and react there forming iron hydroxide floccules. With these floccules we capture and precipitate organic solids,” Karos adds. In a third electrochemical cell, dissolved organic components are degraded by electrooxidative processes, for example by means of a diamond electrode. And finally in a fourth stage with capacitive deionization, dissolved salts are removed by concentrating them by a correspondingly charged electrode and precipitating them.