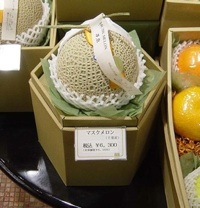 May 26, 2009 – Tokyo – The latest victim of Japan’s recession is round, sweet and famous for being shockingly expensive.

May 26, 2009 – Tokyo – The latest victim of Japan’s recession is round, sweet and famous for being shockingly expensive.

The first two Yubari melons of the season were auctioned recently in northern Japan and fetched 500,000 yen (US$5,200).

It appears the world's swankiest melon is in a major deflationary slump.

Weighing about 2.5 kilograms, the premium cantaloupes were part of the season’s initial harvest at Sapporo Central Wholesale Market. Every year buyers flock to the market for a shot at the prestige of winning the very first melons of the year.

The orange-fleshed melons are grown only in the city of Yubari, a small town on the northern island of Hokkaido. Valued for their perfect proportions and taste, they are typically given as gifts by Japanese during the summer.

The other melons at the first auction aren’t quite as expensive, but even those tumbled in price this year. The average price Friday of 84 melons was about US$400, down from $630 last year, according to the Sankei newspaper.

Department stores and high-end retailers sell the fruit to the public for $50 to $100, though prices can run much higher depending on quality.

Yubari official Kaoru Hirano says the dramatic drop in this year’s winning bid is actually good for the financially strapped city, which needs its melon industry to buck the recession.

“I think last year was highly unusual,” Hirano said. “Such a high price gave the melons a bit of an image problem. Everyone began to think that they were just too expensive, and this hurt the average retailer.”