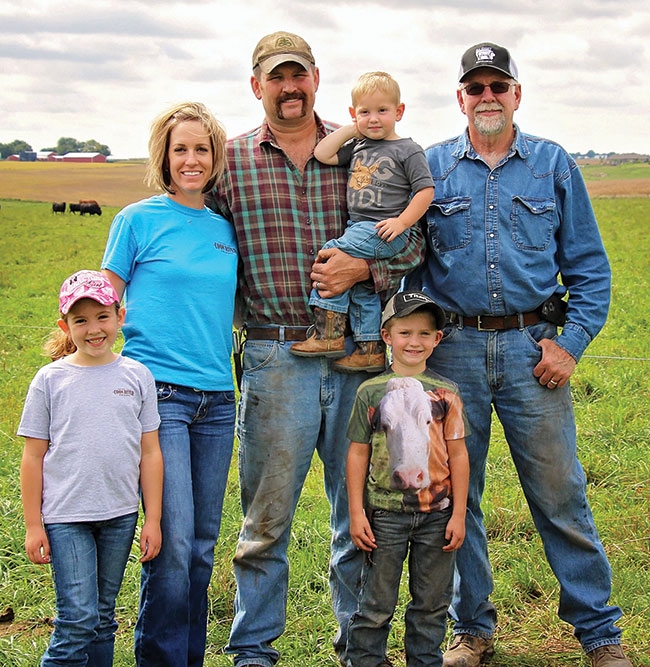 Seth Smith (center), his wife, Etta, and father, Lynn, are working hard to improve upon the quality of their cropland for the benefit of the next generation, with about 75 percent of the organic fertilizer they apply being composted cattle and cornstalk manure. Courtesy of the Iowa Cattlemen’s Association.

Iowa’s Smith family, owners of SFI Inc, have been on a decades-long quest to prove and demonstrate that it pays to practice good land stewardship that includes manure composting, capturing nutrients before they leave their feedlots, and recycling them as organic fertilizer on their row crops.

Unfortunately, despite these efforts, they were still included in a Des Moines Water Works lawsuit that blamed runoff from 10 area drainage districts for high nitrate levels in the city’s water supply. Des Moines is Iowa’s largest city and state capital.

Although the lawsuit was recently dismissed, concerns over water quality persist.

“It’s not over for sure,” says Seth Smith, co-owner of SFI, who says it is frustrating to have their few thousand acres of cropland included among millions of acres in the watershed named in the lawsuit.

It’s a complicated issue, he adds, because of the amount of drainage tile being used by farmers to drain their fertile cropland. Because the terrain in Iowa is generally flat, the low spots tend to hold water, especially in spring. Smith says not many farmers, himself included, are about to give up their drainage tile because it is important for their success as farmers. However, that doesn’t mean that farmers shouldn’t try to do a bit more to contain, divert and reuse organic nutrients within these drainage districts.

“It’s hard to get started,” Seth says. “Once you get started trying some of these initiatives, having some successes, it’s not so hard. Then it’s easier to do the next thing. One leads into the other, and pretty soon you start seeing how it all goes hand in hand. I’m excited to see what we will be doing in 10 years, because I wouldn’t have guessed that 10 years ago, we’d be right where we are now.”

He is carrying on the family tradition, following on the farm management heels of his grandfather and father, who he described as, “fairly early adopters of concepts like composting, GPS and cover crops,” and being highly successful in the process.

“I always say that that if you can get a financial gain from it and an environmental gain, why the heck wouldn’t you do it?” Seth says. “That’s everything that you are after. You make the money for today’s needs, but you preserve and regenerate the land.”

Owned by Lynn and Joy Smith, along with their son, Seth, and his wife, Etta, SFI Inc consists of a 2,200-head feedlot, 210 cow-calf pairs, 510 acres of pasture and 1,900 acres of row crops located in Douglas and Delaware Townships in Sac County. Described as pioneers in conservation practices in Iowa, they started conservation tillage 40 years ago in 1977. They also transitioned some of their row-crop acres to organic production in 2001, and now, 600 acres are certified organic. Seth is past president of the Organic Crop Improvement Association.

Over the years, they have made many investments into animal comfort to improve health and achieve better feed conversion, farming efficiency, and nutrient management at both their feedlot sites and on their pastureland, and they are happy to share their findings with other farmers.

Their actions align with Iowa’s Nutrient Reduction Strategy, aimed at reducing nutrient runoff into the Raccoon River. On a larger scale, Iowa is part of the Mississippi River/Gulf of Mexico watershed, and for a couple of decades, there has been a major focus on reducing the amount of nutrients draining into this watershed because they encourage algae growth, leading to a condition called hypoxia. This is an area of low oxygen, which has a negative impact on marine life.

SFI Inc was recently presented with the 2017 Environmental Stewardship Award by the Iowa Cattlemen’s Association and in describing the Smith operation, they wrote: “Lynn and Seth’s farm stands in stark contrast to the image of Iowa farmers depicted by the Des Moines Water Works and media.”

“As pressure to improve water quality has increased in Iowa, most of the efforts have focused on row crops. But the Smiths are showing other Iowa farmers that environmental stewardship makes more sense from an effort and economic standpoint when there are cattle involved,” says Matt Deppe, CEO of the Iowa Cattlemen’s Association.

The Smith family originally settled outside of Nemaha, Iowa, in 1886. Lynn, who is currently on the Iowa Cattlemen’s Association board of directors, began his farming career in 1971. Seth, who has a university degree from Iowa State University in agriculture systems technology, joined him in 2001.

The home site houses 800-head and features a double containment system for both manure and fuel, even though it is not required given the size of their operation. It consists of two, deep-bedded monoslope roof barns, with cornstalks used as bedding. Essentially, they have developed a closed loop. The cornstalks from their row-crop operation are used as bedding, where it combines with the cattle manure, and later gathered, composted, and returned to the soil as organic fertilizer.

The monoslope barns help to keep rain off the cornstalk bedding, which helps to reduce nutrient run off, while providing shelter for the cattle in both winter and summer. In addition to the monoslope barns, the site also consists of open lots, with some equipped with concrete foundations and concrete in high traffic areas, such as around the feed bunks. The concrete makes it easier to scrape the manure in advance of composting. Manure runoff is also minimized with a settling basin and dike system.

Seth Smith (center), his wife, Etta, and father, Lynn, are working hard to improve upon the quality of their cropland for the benefit of the next generation, with about 75 percent of the organic fertilizer they apply being composted cattle and cornstalk manure. Courtesy of the Iowa Cattlemen’s Association.

The second feedlot is called the riverside feedlot and is situated in a rather environmentally sensitive area overlooking the Raccoon River. It was built in 1977. Seth says that 40 years ago, the hillsides around the river were covered with feedlots without anyone really realizing the problems this was creating downstream. SFI has taken a variety of remedial measures to ensure it is not perpetuating the problem. For example, settling basins were part of the original feedlot design. It also consists of two monoslope roof barns with cornstalk bedding. Most of the feedlot has a concrete foundation, with solids collected in the settling basins. A lagoon captures any remaining waste. All told, it captures 17 acres of feedlot, corral, and manure storage area runoff so that no nutrients reach the Raccoon River. The water collected in the lagoon is then used to irrigate and fertilize surrounding fields through a pivot sprinkler system.

Like the home location, the solid manure and cornstalks are windrowed and composted for use as fertilizer in surrounding fields.

SFI estimates that, based on their nutrient recycling system, each of its animals provides about $47 worth of nutrients for their row-crops.

The Smith’s decision to compost their manure is one example where converting the raw manure to a more benign form of organic fertilizer is helping the environment, but it was business considerations that drove the decision. Seth says it was a desire to reduce the volume of organic fertilizer transported to the field that was the main motivation behind the composting decision.

Raw manure is transported with a side dump trailer from the feedlot and put in place into a windrow at a dedicated and properly sloped and diked composting site. To turn the compost as is required to ensure a proper conversion, SFI uses a modified, payloader-mounted, Wildcat compost turner.

Overall, the Smiths apply very little commercial fertilizer on their row-crop acres, which itself brings nutrient reduction benefits. They typically only side-dress liquid nitrogen in summer, with their primary fertilizer sources being composted cornstalk bedding, cattle manure and turkey manure from a neighbor’s operations. Using cattle manure as an alternative to commercial fertilizer is estimated to reduce the phosphorus load on their row-crop acres by 46 percent. Use of organic matter also increases biological activity within the soil.

They do fertilize some of their row-crop acres with raw manure. Seth says they apply some raw manure because they are still working toward installing an entire concrete foundation for their feedlots. At present, there is just too much clay mixed in with the cornstalks in some lots for composting to work well, but they are investing in more concrete pens all the time and expect to be entirely on concrete in a couple of years. He estimates that about 75 percent of the organic fertilizer they apply is compost and 25 percent raw manure. They have three manure spreaders. One is a Knight manure spreader with a spinner broadcast system and the other two are custom spreaders – one with a beater-style broadcast design and the other with a spinner design.

As a further demonstration of how serious they are about minimizing nutrient runoff, SFI diverts water that collects into a drainage ditch on their pastureland into a collection pond. The pond is fenced off so that cattle can’t access it, but a gravity system carries the water to other nearby pastures where it is used to water cattle while keeping them away from the drainage ditch.

The Smiths are strong believers in the importance of maintaining and improving soil quality for the benefit of future generations, believing that it is not enough to sustain current farm practices but that there is a need to improve soil quality. Using compost helps to accomplish that.

“It’s extremely important that we improve this land,” Seth says. “From the time that the Earth was created up until we started plowing this ground, it just kept getting better. But generally, in the years since people have been farming it, the soil has been degrading.”

It’s not only important to sustain the land in its current state, but Seth says it needs to be improved upon before it can be sustained.

Related
Getting creative
Crops and livestock on the same farms, the same fields – why?
Research leading to new info on feedlot emissions
Dry weather and feedlot runoff
Tags