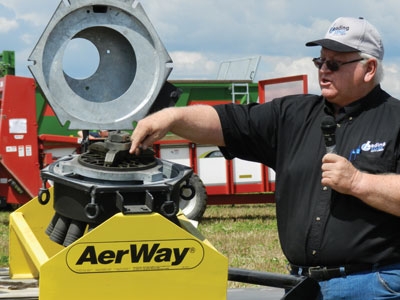 While it was nutrient management legislation that originally generated an interest in the greater precision of manure application, now it’s the high price of fertilizer that has driven a renewed interest in today’s more innovative manure distributors.

“As the value of commercial fertilizer rises, farmers want more consistent application across the width of their machine,” Wayne Graham of Leading Edge Equipment in Burgessville, Ont., told the crowd at the Manure Demonstration Day held at Jake Kraayenbrink’s farm near Moorefield, Ont.

Graham brought an Aerway SSD (Sub-Surface Deposition) model to the demonstration. Servicing up to 50 hoses to cover a 30-foot boom width, this unit, with its German Vogelsang distributor, is what he described as the most sophisticated model currently available.

A basic distributor is a pot that divides the flow either coming off a tanker or coming off a drag hose into two or three splash plates, described Graham. If you want the flow divided across the width of the machine, a basic distributor will provide that. But many distributors would simply divide the flow to go to the shortest hose or path of least resistance, depositing the manure into trenches that are vulnerable to washouts with the manure ending up in the lowest parts of the field.

With the Aerway, the process begins when the fluid feeds into the top of the distributor, where a cutting disc rotating at 300 to 400 rpm cuts anything that may be in a liquid manure – straw, wood, bones – so everything passes through a two-inch hose. As it rotates, there’s a pulsating action across the line that feeds the material evenly across
the machine.

As Graham explained, rather than create a continuous trench, the Aerway actually fractures the soil, creating pockets that allow the manure to spread out into the soil layers. This latest Aerway system is hydraulically driven, putting exactly the same placement of fluid in every hose and in every pocket created by the machine.

Recent design changes have now allowed for larger pockets in the ground and this model also features a drag hose boom that reduces strain on the drag hose at the end of the field.

The uniform placement of the manure means that an operation such as side-dressing corn is possible and can give excellent results, said Graham. If you go on a hillside with just a gravity pot you’ll see the lower end of the machine gets the most manure. With a distributor, all the corn will respond in the same way, even on a hillside.