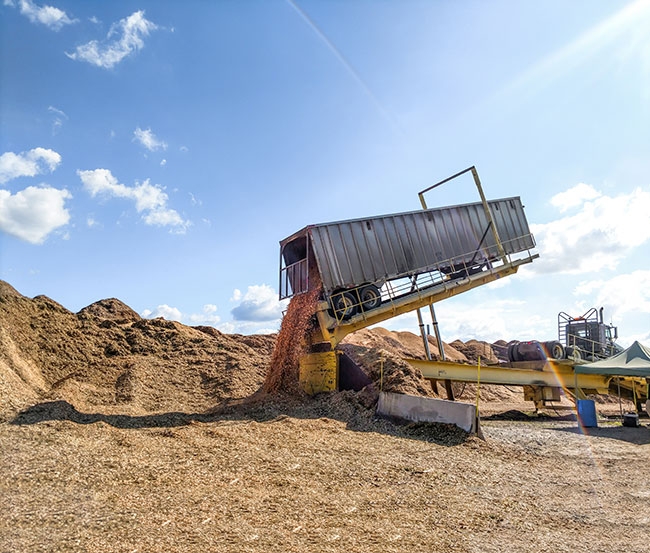 The wood chips (from virgin wood debris) are put through belt dryers and sold as bedding back to poultry houses across North Carolina. Contributed photo

North Carolina is described as the heart of the “American Broiler Belt.” With the poultry industry still expanding to some extent in the state and less land being available for manure application due to population growth and urban sprawl, alternative uses for poultry litter are being urgently explored.

North Carolina Renewable Power (NCRP), a subsidiary of Georgia Renewable Power, has taken up the challenge and is running with its hard-earned success. The company brought in experts from around the globe and converted a dormant coal-fired power plant in Lumberton, NC, to a co-gen plant that uses both poultry waste and wood as fuels. This combined heat and power facility now generates 25 MW of electricity (most of the profits) with excess heat used to dry wood chips sold for poultry barn bedding and the nutrient-rich ash sold for crop fertilizer, bringing the poultry production cycle full circle.

Construction of the plant, which began in early 2016, provided about 300 building jobs and the plant’s ongoing operation requires 133 full-time employees. The above-average wages and full benefit packages that come with these jobs are very welcome in Robeson County, which has the highest poverty rate in the state. NCRP estimates that 90 percent of the jobs at the plant were local hires.

This poultry litter co-gen plant is not the first in the United States, nor the world, but it’s one of the few (see sidebar).

“There is one in Benson, Minnesota, and several plants in Europe,” said David Shaffer, president of Georgia Renewable Power. “This plan is unique as it’s a repurposed coal plant that can burn up to 50 percent litter. We buy litter from poultry barn clean-out companies for $17 to $19 [USD] a ton and it does not have to be dried for use in the plant, but it’s highly corrosive due to its high chloride (salts) content and we had to make many modifications to the plant’s original Foster-Wheeler furnace coal furnace.”

Shaffer uses a comparison to describe just how corrosive poultry litter is.

“We know how road salt corrodes metal over time in winter temperatures. Well, just imagine how much corrosion occurs in a boiler at 2000 degrees,” he said. “It happens very, very fast. In addition to creating a new fuel feeding system, we added more cleaning equipment inside the furnace and modified the air quality control systems to meet federal standards.”

There is also a very large amount of ash that is produced.

“Poultry litter is a rewarding fuel in that it gives you lots of ash, but getting the entire system to run reliably was challenging,” Shaffer said. “A lot of it was learning as we went.”

He noted that because there is no one engineering company in the world that could do the modifications required, NCRP brought in the best specialists in the world, from metallurgy to air quality.

“The investment was $100 million for plant purchase, remediation and modifications, and to get the supply chain for by-products set up.”

The ash travels through the furnace and goes out with the hot air stream, where it is continuously collected in cyclones (60 percent) and large fabric bag filters (40 percent) and stored in a silo until delivery to a fertilizer manufacturer. The wood chips (from virgin wood debris) are put through belt dryers and sold as bedding back to poultry houses. Shaffer said they’ve had a good response to the product locally and all their chips are sold within North Carolina right now.

The plant began operation in August 2015 and some modifications were finished after that, with full operation beginning in October 2016.

“We are processing about 185,000 tons of poultry waste a year, mostly turkey as it’s not as corrosive,” Shaffer said. “But our new boiler will take much more, about half a million tons and all chicken litter, because it will be able to accept 100 percent poultry litter with no wood required.”

Yes, NCRP is about to start building an Andritz boiler, similar to one in Rotterdam in the Netherlands, a project that will be finished by 2020 and will pay for itself within five to seven years of operation.

“Once the Andritz is up and running, we’ll use dried and pre-conditioned swine manure and burn it with natural gas,” Shaffer explained. “Some modifications will have to be made but not many.”

Veolia Energy Operating Services is managing the plant and has also been helping evaluate potential upgrades that will significantly increase the amount of poultry litter that can be processed, while improving efficiency and reliability.

For its innovative and unique Lumberton plant, NCRP won a 2016 Community Development QLICIs (qualified low-income community investments) of the Year Award, given out by the Novogradac Journal of Tax Credits to recognize excellence in affordable housing, community development, historic preservation and renewable energy.

The wood chips (from virgin wood debris) are put through belt dryers and sold as bedding back to poultry houses across North Carolina.

“It was very nice to hear about the award,” Shaffer said. “We work closely with the community of Lumberton. Robison is the poorest county in NC, and we are now one of the largest employers here. And last October, our community connection was made stronger.”

Hurricane Mathew quieted down from Category 5 to Category 1 before it hit North Carolina in October 2016, but the entire Lumberton area was subjected to torrential rains and extremely flooding.

“It shut down the community and shut down the plant completely for 21 days,” Shaffer said. “With the water around the plant, we were going to work in boats, then we could use tractors and then trucks. One of our employees, his church was serving 8,000 meals a day and the company helped with that, and it also contributed to help rebuild some of our employees’ houses.”

Shaffer has decades of experience working in the power plant industry, from nuclear to solid waste to biomass, but Lumberton is a unique challenge and he’s pleased that he is involved with a renewable project on a large scale.

“My partner is Raymon Bean, and he’s a great partner to work with,” he said. “We’ve have challenges with the hurricane and lending capital. Traditional lenders are wary of lending to new types of ventures such as this, and we are blazing new ground, but more lenders are coming on board and we will be in high gear soon with construction of the new boiler.”

Other poultry litter energy developments
In 2007, the world’s largest power plant utilizing poultry litter got up and running in Benson, Minnesota. Farms across the ‘Land of 10,000 Lakes’ region produce more than 45 million turkeys a year and a million tons of litter a year, some of which is used each year at the FibroMinn power plant (in addition to wood waste) to produce 65 MW of electricity. The plant is now owned by RNG Energy Solutions.

The technologies used in the plant were developed over 15 years, and involved Fibrowatt, an American firm founded by the British management team that built the first three poultry litter-fueled power stations in the world (located in the United Kingdom).

Fibrowatt, in partnership with Perdue Farms, submitted a proposal in 2011 to build a co-gen biomass boiler operation (fed in part by poultry manure) in Maryland, but the proposal was rejected.

However, several manure-to-energy projects are now proceeding in Maryland. One is a co-gen system in which an Ireland-based firm called BHSL has invested $3 million [see article in this issue of Manure Manager]. The system, installed in 2016, involves burning poultry litter to heat the poultry barns at Double Trouble Farm in Rhodesdale, which reduces odor, saves heating costs and allows for sale of some electricity to the grid. Maryland’s Department of Agriculture has committed $1 million to the project and funded other manure-to-energy projects as well.