Features Applications Poultry
Poultry litter: How old is too old?

New research is characterizing litter microbiota to find out how it helps poultry resist common diseases. 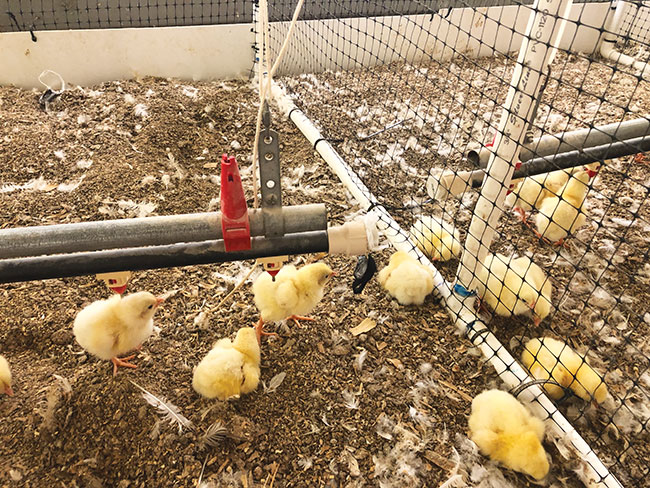 When it comes to re-using poultry litter for successive flocks, how old is too old?

Research led by research microbiologist Adelumola Oladeinde, who works in the bacterial epidemiology and antimicrobial resistance research unit at the USDA’s National Poultry Research Centre, shows that contrary to established wisdom, using fresh litter for new poultry flocks can have a negative effect on the microbiota and chicken mortality.

But many questions remain as to management decisions, and these can only be answered with data.

Oladeinde says in Canada and Europe, it’s common practice to completely replace litter between flocks, but in the United States, litter is reused over multiple flocks, and sometimes for a period of several years, before being replaced.

In the U.S., during “downtimes” between flocks, used litter is typically decaked, tilled/windrowed, or treated with acid-based amendments to reduce litter pH. It is also occasionally “topped up” with fresh pine shavings.

The exact amount of time that litter is reused is left up to the producer, as is the length of the downtime before a new flock is introduced. The latter tends to reflect supply and demand more than poultry health, says Oladeinde, and isn’t standardized across the industry.

“If there’s a lot of demand for chickens, downtime is reduced. But what is needed is a scientific basis for that decision. Currently, it’s random – so that’s one of the questions we’re trying to answer. What impact does that time have on the microbiome? Does it result in a decrease of pathogens or an increase?” he says.

In 2017, when the research began, Oladeinde set out to assess whether Salmonella can successfully colonize litter and compete with the beneficial bacteria already present. What he found was the opposite: reused litter tended to harbor a mix of microbes that naturally kept pathogens in check. The length of the downtime – and whether or not producers used pH amendments – had significant impacts on these levels.

In his latest research, Oladeinde attempted to characterize the litter microbiota to better understand how management choices impact populations of beneficial and harmful microbial communities, and answer the question of how the litter microbiota works to help poultry resist dangerous pathogens like Salmonella and pathogenic categories of E. coli. 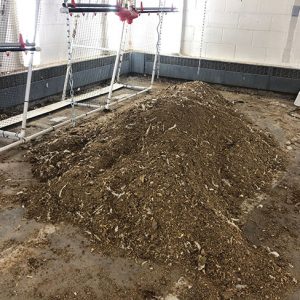 Reused litter stored in a pile for later use. 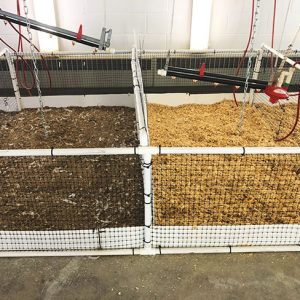 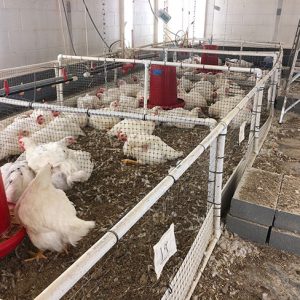 Helpful and harmful populations in litter microbiota
In one study designed to document changes in the microbiota during downtime, Oladeinde used DNA sequencing to determine the makeup of the litter microbiota. He found the litter (after an 18 day downtime) was dominated by bacterial genera that are known to be beneficial, such as Faecalibacterium (Firmicutes), Lactobacillus (Firmicutes), and Bacillus (Firmicutes) and Nocardiopsis (Actinobacteria). However, when treated with acidifiers such as sodium bisulphate or sodium hydrogen sulphate (NaHSO4), “bad bugs” such as E. coli increased.

“In that study we saw a 90 percent decline in E. coli by leaving it for 18 days. At the same time, we see stability in [levels of] good bugs that are commonly used as direct-fed microbials when we reuse litter,” he says.

“What we observed is that when we put this acidifier on top of top dressed litter, the gain is reversed, and we see this bloom in E. coli populations that [had been] declining.”

Competition is a driver of resistance, says Oladeinde, and it’s likely that the more complex the environment, the more self-regulating it becomes.

In another study, he attempted to characterize a “healthy” gut microbiome – or a microbiome better able to resist pathogens such as Salmonella and E. coli – in broiler hens, by challenging broiler chicks raised on reused litter with Salmonella Heidelberg, a model pathogen.

“We show that chicks raised on reused litter carried lower abundance of Salmonella and harbored a more uniform and diverse microbiome comprising of bacterial species that are known to provide colonization resistance towards Salmonella compared to chicks raised on fresh bedding composed of pine shavings,” writes Oladeinde and his co-authors in a publication based on his results.

Of particular interest, he adds, was the enrichment of antimicrobial pathways in reused litter, which indicates higher levels of competition between bacterial species as the litter was used by more flocks.

How, exactly, does it work? Oladeinde says the first thing broiler chickens do on entering a new environment – before eating or drinking – is to peck at the litter. “When we look at the genes that are in used litter, a lot of them are catabolic genes, able to break down a lot of nutrients, ions, metals easily. The feed we use always includes metals like zinc and copper,” he explains. “The litter already contains bacteria that can break these down. The chickens are enriching themselves with bacteria that [are] able to do the work.”

Streptomycin, an antibiotic derived from bacteria, is also abundant in reused litter, he adds. When chickens are challenged by Salmonella or E. coli, the streptomycin is able to knock off those pathogens before they cause problems.

But the length of time producers should keep a flock on reused litter before pathogens mount in numbers is still imperfectly understood. “It is possible that after several years or multiple flocks, some pathogens may become resistant to the competitive exclusion potential of reused litter, and that warrants further study,” says Oladeinde. Litter cannot be reused forever.

It’s also clear that balance is key: producers should avoid top dressing with fresh pine shavings, if they plan to acidify the litter in between flocks, which can have a negative impact on antibiotic resistance and can result in E. coli blooms. He adds that acidifying litter can have many benefits; it reduces litter ammonia and pH, which is particularly important to the health of the flock. In addition, they can help reduce litter moisture, which keeps litter dry and can lead to a reduction in pathogen numbers and better foot-pad scores, he says.

“Acidification just has to be done the right way, and we are in need of more focused research on this,” he says.

In a new project, Oladeinde intends to look at whether fresh litter can be inoculated with “good bugs” from reused litter. In another project conducted in collaboration with Agriculture and Agri-Food Canada researcher Moussa Diarra, Oladeinde will generate more data documenting Salmonella populations in fresh versus reused litter.

“We need more data to convince the industry,” he says. •