The diversified Porter family farm raises thousands of chicks and pigs, as well as cattle, and due to successful manure management, also runs a successful farm wedding venue 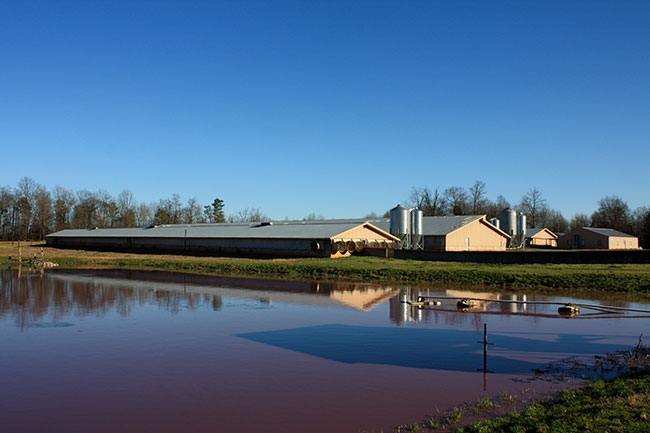 The Porter’s operate a 2,200-sow farrow-to-wean multiplication farm, contracted through Smithfield. Waste from the barns is regularly flushed out to a one-acre, anaerobic lagoon, which also acts as a holding pit. Contributed photo

It takes outstanding teamwork to juggle it all.

The Porter’s 2200-sow farrow-to-wean farm is contracted through Smithfield. They have two farrowing buildings 400-feet by 60-feet, a 500-foot gestation building, a 500-foot breeding building, as well as two guilt development buildings where the new breeding stock comes in.

“At the guilt buildings, we monitor the animals and test their blood to assure they are disease-free before being introduced into the herd,” explains Jared Porter, third-generation on the farm.

Fridays, the buildings are used to ship piglets.

“We’re contracted to raise 24 to 28 day-old piglets and every Friday we ship out between 800 to 1,000 piglets to offsite nurseries,” says Jared. “They go out a separate ramp because they are going to a clean nursery and they’re disease free.”

In the hog barns, the waste is captured into one-foot sloped pits under the barns. The waste is regularly flushed to a one-acre, anaerobic lagoon, which acts as a holding pit.

“At the top of each barn is a flood tank,” explains Jared. “We are recirculating water from the lagoon to fill up and flush about three to four times a day to clean out.

“The liquid waste we use on our fields for hay crops. We have traveling reel irrigation guns supplied by underground piping to hydrants in the fields. We monitor how many inches are going on and make our pulls accordingly.”

Pumping is done with a diesel-driven Berkeley pump at 18-inches below surface and the lagoon levels are maintained to ensure the lagoon works properly. Pumping isn’t done any lower to avoid the solids that build up at the bottom.

“Eventually, the sludge will build up to a level where we have to do something about it, but so far that hasn’t been a problem,” says Jared.

In North Carolina, swine effluent irrigation is only allowed on growing crops, which usually means irrigation takes place between March and November. During that time, the Porters work around the rain.

“If the ground is already saturated, the waste will just flow right off and go into the creeks, which obviously we cannot do.”

Nitrogen levels on the irrigated fields are closely monitored. Soil and waste samples are tested during the year to ensure there is no nitrogen buildup.

When it comes to irrigation, the Porters also try to be good neighbors. For example, even though they are permitted to irrigate near the road, Jared says they choose not to.

“It’s just another step we take to remove those odors when we’re irrigating, and keep it out of sight as well.”

The Porters do clean-outs about every third flock or when Tyson requires it. When they de-cake the houses, material is moved to three litter storage buildings, which are covered concrete floors, built to state specifications.

“We use skid steers to remove the litter from the houses and then we will usually store about 80 percent in the litter storage buildings and then we might spread 20 percent to supplement the places that we can’t irrigate,” explains Jared.

Two of the litter storage buildings include permitted static composters.

“We use dry litter to compost all the mortality on the farm,” Jared explains. “One composter composts all the dead at the hog operation. The other is used for dead chickens, as well as cull or cracked eggs we collect.

“When something on the farm dies, we’ll bury it and then start in a circular rotation daily where we move piles. By three months, everything should be about gone. You can reuse it. We usually try to reuse it maybe once, then we will spread that on the field.”

The odor of composted litter, however, is more powerful than dry litter. For that reason, composted litter is only spread on certain fields. And the Porters constantly monitor the weather because, if the compost is spread at the right time the odor, can be knocked down.

The Porter’s operate a 2,200-sow farrow-to-wean multiplication farm, contracted through Smithfield. Waste from the barns is regularly flushed out to a one-acre, anaerobic lagoon, which also acts as a holding pit.

The cattle are the smallest piece of the Porter portfolio. The 400-head of brood cattle are pastured raised and because they aren’t confined, manure management is not an issue. However, the Porters do work with the Cabarrus County Soil and Water Conservation to have the ponds and streams fenced out and all the cattle are supplied with well water to drink.

Even though the farm is fairly isolated, the Porters still have a few neighbors, including a church with an active ball field. At least three days a week, people are out playing baseball, which means the Porters are always monitoring odors. They don’t irrigate on Sundays and try to avoid Saturdays because the ball field might be occupied.

Everything is taken into consideration when it comes to odors, says Jared, from wind direction to humidity.

“The more moisture in the air, the smell is going to travel.”

The Porters have been growing the agritourism side of the farm since Jared’s sister was married in 2012.

“While they were on their honeymoon, we had a couple approach us wanting to get married on the farm, and the business started from there.”

Because there are cattle near the site and the fields are fertilized with chicken litter, the Porters again have to worry about odors – primarily picking their spreading days with caution.

“We try to do it on a Monday so it has five days to settle [before a wedding] and then we try to look at the forecast of the rain. If we can get a good rain after we spread, the rain will knock down that dry dusty manure smell.”

They must be doing a good job because, to-date, nobody’s complained about the odor and the cattle are often requested for wedding pictures.

Jared says weddings allow the family to promote the industry because many people who come out have never been to a farm.

“We’re 45 minutes from Charlotte, two hours from Raleigh, and an hour from Greensboro. They have no clue there’s this kind of acreage or isolation close to the city.”

“On the weekends when we do weddings, we’re all out there, whether it’s directly working with the bride and groom and the participants or making sure the kids are occupied while the wedding is going on.”

It’s not just weddings that allow the Porters to talk-up farming. They also host a large county picnic focused on promoting farming and a Spartan Race (an obstacle/mud run).

“This will be the fourth year we’ve hosted the race. In April we have between 8,000 and 10,000 participants come run a three- to five-mile obstacle course on the farm. It’s a pretty big deal,” explains Jared.

The Porters provide 60 acres for parking and ensure the trails run far enough away from their operations so there’s no security risk to the hogs.

“We don’t know where these participants have been,” says Jared. “Some may come from other hogs farms.”

It takes the entire Porter family and more to make this all happen – from hogs to weddings.

Jared’s grandfather, Tom, and father, Tommy, started building up the farm in the mid 80s. Today, Tom, 95, still helps out.

Jared and his wife, Colleen, his brother, Derek, and wife, Amy, and his sister, Erin, and husband, Christopher Conser, all live and work on the farm, along with Tommy and wife, Vicky.

“Derek is a fireman in Concord, so he works at the firehouse and he’s here four days a week,” says Jared. “Erin does the wedding coordinating along with the other girls, and also does a lot of the bookkeeping. Her husband, Christopher, works with the hogs full-time and the rest of us are everywhere.”

In addition, the Porters have three employees who manage the cows and pullet operation, four women who manage the layer house, and eight to nine men to help run the hogs.

It’s taken 30 years of work to get the size and versatility.

“The agritourism has been a huge expansion, and it’s basically allowed my siblings and me to move back to the farm and work full time,” says Jared.