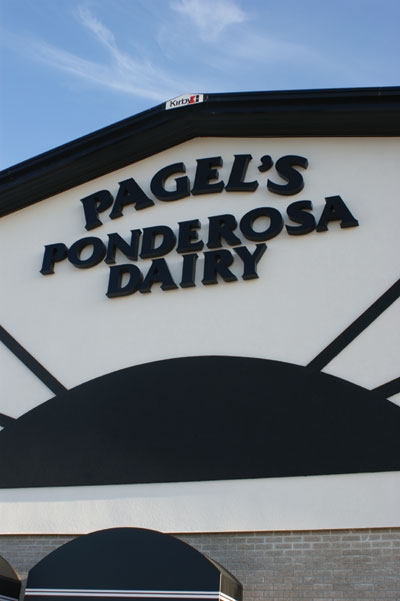 Pagel’s Ponderosa Dairy is a 4,600-cow dairy facility located in Kewaunee County near Green Bay, Wis. – not far from the shores of Lake Michigan. Photo by Margaret Land

John Pagel grew up in Wisconsin’s Kewaunee County and has lived in the same house on his family’s farm operation his entire life. “And I still want my neighbors to wave at me with all their fingers,” he explains.

That was one of the main reasons Pagel’s Ponderosa, a 4,600-cow dairy facility located near Green Bay, Wis. – not far from the shores of Lake Michigan – decided to install an anaerobic digester in 2008.

“We looked hard at putting a digester in … the main reason being for public acceptance,” recalls Pagel. “There had been times in the state of Wisconsin and other parts of the country that large-scale agriculture was not always welcomed. We were trying to do what we could to improve that situation.

“At the time we put it in, it was a $3.2 million investment and we received about 10 percent with government grants for new technologies,” he says, adding the farm is hoping for a seven- to 10-year payback on the project.

The Pagels’ GHD Inc.-designed combined plug flow and mix digester not only helps with the neighbors, but it also helps with odor reduction plus supplies bedding to the dairy and 800 kilowatts of renewable energy to the surrounding area.

The anaerobic digester
Pagel’s Ponderosa features six free stall barns with a combined 500,000 square feet of living space for the farm’s dairy herd. Manure from the facility’s two newest free stall barns, which are tunnel ventilated and contain 1,750 cows each, is scraped several times a day via skid steer into a flume system. From there, the manure is stored in two reception pits and comingled to create a consistent recipe before entering the farm’s anaerobic digester.

“Basically, it’s a big cow stomach,” says Melissa Van Ornum, marketing manager with GHD Anaerobic Digesters of Chilton, Wis. “When (cows) take in the feed, it goes into the stomach and the bacteria in the stomach break down the long chains of proteins, carbs and such, into smaller chains. They release energy when they do that and that’s the energy the animal uses (to produce milk). But because the cow only holds that feed for maybe half a day or three quarters of a day, there’s still a lot of energy in the waste. So we put it into our concrete stomach and hold the waste for 22 days.”

The Pagels’ 16-foot-deep digester is 144 feet wide and 200 feet long. Like a traditional plug-flow digester, new manure enters from the reception pit, displacing manure in the digester and forcing digestate out the other end.

“Where we’re unique is we’ve combined the two traditional types into one,” says Van Ornum. “We have the plug flow shape so the new is pushing the old forward. But at the same time, we take some of the biogas off the top and inject it in the bottom. That causes a lifting and a mixing motion.”

With this design, the GHD digester is able to take in manure with less than one percent solids, something that would be impossible with a traditional plug flow digester, which is limited to manure with 11 percent solids or greater, explains Van Ornum.

“We’re sweeping that floor when we’re mixing,” she says. “You don’t have the buildup. At all of our sites, we’re taking not just the manure but also the parlor water. Often, we’re seeing waste with six to eight percent solids going into our digester and we can handle that, no problem.”

In the digester, biogas is collected in the 2.5-foot headspace at the top of the vessel, which is covered in spancrete and foam insulation plus a UV coating to protect it from the sun. The collected gas, which is made up of 60 percent methane and 40 percent CO2, is used to power the Pagel’s 3516 CAT engine, which generates 800 kilowatts of power.

“We sell 100 percent of the power we make and we buy 100 percent of what we use,” says Pagel. “At 800 kilowatts, we’re making about 25 percent more than what we’re using on the farm itself.”

The dairy plans to add a second engine and provide an additional 500 to 600 kilowatts of power, “if we have enough methane gas,” says Pagel.

Growing pains
Installation of the anaerobic digester came with a steep learning curve for the Pagel family.

“We were digester virgins when we put this thing in,” says Pagel. “We knew absolutely nothing about them. We’ve learned a lot since.”

Among the learning opportunities with the operation have been issues with buildup in the digester pipes that can flake off and cause blockages.

“It’s a scale-type material,” explains Pagel. “We’ve blocked the pipes more than once. If you want to talk to anyone, talk to my son about how much fun it is to get it out. We have cleanouts installed and we need to put in more.”

Bedding from biosolids
When the digestate leaves the GHD digester, it is piped into the Pagels’ digester building where it is fed into a top holding tank before being fed through the farm’s three screw press separators. A safety system has been installed into the separator system to prevent possible spills.
“Once we had the tank overflow and we were close to having a spill,” explains Pagel, adding that the safety system shuts down all the pumps if there is an overflow.

The resulting separated biosolids, which are about 30 to 35 percent solids, are recycled back into the Pagels’ free stall buildings as bedding for the dairy cows. The free stalls are leveled and bedded three times per week.

“We really like the digester and we really like the bedding it provides,” says Pagel. “We use it for bedding on our facility plus five other farms we sell to. We make about 40 percent more bedding than what we use.”

The farm also makes it available to area neighbors for use in their gardens and landscaping projects.

“We have more than 100 people who come and get that material and they just love it,” says Pagel. “We’ve had people come back and give us vegetables out of their gardens because the harvest has been so much higher.”

Pagel’s Ponderosa bedded on sand starting in 1985 and switched over to biosolids with the construction of the digester.

“We love the bedding. We really like the solids for cow comfort. The cow is a little bit cleaner because it keeps the manure drier inside the alley. It’s a nice soft pillow for the cow to lie on. The cows love the material.”

The liquid resulting from the screw presses is pumped out to the operation’s lagoon system, which consists of four lagoons in sequence.

In total, Pagel’s Ponderosa crops about 8,000 acres. The family is also involved in a second dairy operation near Casco, Wis. – Dairy Dreams – which milks about 2,800 cows and is managed by Dr. Don Niles. That operation installed an anaerobic digester in August 2010. The Pagels also operate a heifer facility with about 1,100 head and keep about 2,100 calves and heifers at the Ponderosa Calf Ranch.

Public education
Pagel’s Ponderosa is not only an operating dairy – the largest single family-owned operation in Wisconsin – it’s also a tourist destination and educational facility. The farm hosts school tours on a regular basis and also welcomes other visitors. A special observation area has been constructed so people can watch the dairy’s cows being milked on the farm’s 72-cow rotary milking parlor and a large conference room has been constructed on the second floor to accommodate groups.

“I believe that it’s our responsibility to educate the people who are non-farm people as to what’s going on [at] the farm,” says Pagel. “I don’t think we’ve done a good enough job of it in the past. And you can see that because of some of the articles that you read in the paper every once in a while. There’s always that false information that large farms are bad, that they don’t take care of their animals and that they’re not good for the environment.

“We also believe that though this is a large farm, it’s also a family farm. We have four children and all four children are involved in the farm along with two of their spouses. It’s important to us to try to educate the public.”

Related
In the news: Janaury-February 2011
Going low
In the News: November/December 2010
On track: July-August 2011
Tags