Prestage AgEnergy, a division of Prestage Farms, brings a new co-gen plant online that has the capacity to burn 60,000 tons of turkey litter annually, produce electricity, and provide steam for its feed mill. 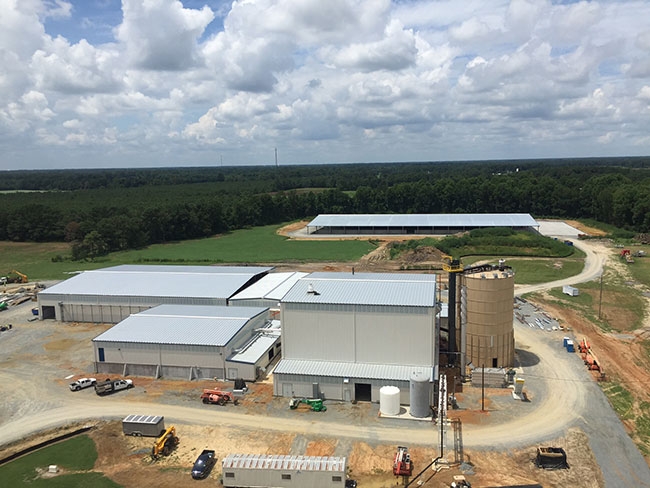 Prestage AgEnergy of North Carolina is currently constructing the largest co-generation plant to run solely on turkey litter near Clinton, NC. The facility is expected to be up and running in December 2016. Contributed photo

Prestage began seriously considering a poultry litter project as far back as 2011. The company put in time doing its homework – and looking at various systems and why certain systems do and don’t work when dealing with poultry.

“Poultry litter doesn’t have the same BTU value as wood. It’s slightly less,” explains Pope. “But because litter is wood-based, it’s a much more traditional fuel source to work with.”

There was also a mandate to utility companies in North Carolina to purchase a certain amount of renewable energy from swine, poultry, wind and solar.

“We started looking at ways to address the mandate to utilities, and also address any potential issues that may come down the road with poultry litter and land application,” says Pope. “Where we’re located – Sampson and Duplin County – there’s a lot of litter that has to be land applied.

In addition, Prestage had successfully used wood chip boilers in the past, and in particular Hurst boilers.

“We’d had great success with their [Hurst] equipment and their products, and that’s part of what led to us collaborating with them on how we could make this work with poultry litter.”

Hurst Boiler, out of Coolidge, Georgia, was also a good choice because of its long history in the energy business. The international manufacturer of a complete line of gas, oil, coal and hybrid biomass fuel-fired steam and hot water boilers has been operating since 1967.

When Prestage initially went to Hurst with its idea, Hurst wasn’t sure if their boilers would handle 100 percent poultry litter, but an unexpected event occurred in Guatemala that would change the course of events.

During a biomass shortage, a Guatemalan poultry company began fueling their Hurst wood chip boiler with chicken litter. As expected, the boiler ran into some issues, but it continued to operate.

“It was a very manual, and very crude process, but it demonstrated that even without treating the litter like we should, these boiler systems could handle poultry litter,” says Pope.

Creating the innovative boiler system for Prestage became a team effort. Hurst made some slight modifications to its system and Prestage made modifications to how it would handle its litter prior to it reaching the boiler. The result was a 1500 HP biomass boiler, the largest in the United States, fueled 100 percent on poultry litter.

To run the boiler 24/7 will require approximately 175 tons of turkey litter per day.  Prestage doesn’t see that as a problem. Pope says that not only is the company located in a good area for procuring litter, the industry is expanding in the region.

Crews will go out, as normally scheduled, to approximately 60 turkey farms to do a complete clean out of litter or a “cake” cleaning under the feed and water lines. The litter will be transported back to the facility.  And, Pope notes, that although the boiler can run on chicken or turkey litter, the company is currently just focused on turkey litter.

“Moisture content is key for utilizing litter in the boiler, and making sure that it gets a fairly consistent product coming in,” says Pope. “Our focus is power production and providing steam for our feed mill to get them off of natural gas. But we’re also focused on using the ash as a fertilizer, as it’s high in phosphorous and potassium.”

Storage is a big piece of the project – both for litter and ash.

While the litter is stored in a large covered facility, the ash will be stored in an enclosed facility because once wet it tends to harden like concrete. The storage space for the ash is large because Prestage anticipates seasonal use by famers.

“We are teaming up with a very successful regional fertilizer company. We will be using their existing sales channels, and they’re very excited and absolutely believe they can move every ton of ash that we produce.”

The facility will be up and running in December 2016 and Prestage is estimating they will annually produce the equivalent of 95 GWh of power and 9,000 tons of quality ash.

Pope says the nutrient-rich ash product not only gives the company options, but farmers as well.

“The ash can go to fertilizer manufacturers. It can also go straight into field application for the farmers,” says Pope. “That’s nice because a lot of farmers have used poultry litter in land application for their crops, but don’t always get consistent spread and can’t precision farm. So, instead of using litter, they sell us the litter and with the money we put in their pockets, they can take that and buy traditional fertilizer that allows them to precision farm, get better yields on their crops and give the fields exactly what they need.”

The challenges have been exactly what one would expect with a first-of-its-kind system – figuring out exactly what the boiler is capable of, and the make up of the litter to ensure it functions properly and efficiently.

“We’ve learned it’s expensive being innovative. But it’s good, because what it really does at the end of the day is benefit all the poultry growers,” says Pope.

“Growers have to get rid of the litter and land application has been an issue depending on time of the year and the weather. Currently, growers may or may not be able to get the litter out of their houses and land applied. There are certain areas that may be rich in phosphate, where you don’t want to put litter on the ground. Also, farmers never know what the EPA is going to do, and what sort of challenges they may have to face environmentally. What this system does is provide another outlet – a year-round outlet – for poultry growers to send their litter for processing.”

One challenge Prestage didn’t face was finding an experienced crew to run the new facility. An older power plant in the area wasn’t able to successfully complete a conversion from wood chips to poultry litter, and had to shut down. The timing was such that Prestage was able to step in and hire a significant number of people from that facility to operate theirs.

“We’ve got operators experienced in running a power plant and using a wood based product. And they do have some experience from testing poultry litter at their facility. We couldn’t be more blessed,” says Pope. “It was unfortunate that a facility had to close, but we were able to pick up the best of the best to operate this facility.”

Prestage is proud that it hasn’t rushed into this new area, and that it has put in the time and energy to ensure the road it’s taking and the technology sued will be successful.

“Because [Prestage] was new to this arena and because it was all poultry litter, we didn’t want to get out there, fall flat, and it be a failure and a disappointment to the industry,” says Pope. “We want to make sure it works and that it was long-term and that it would create avenues for others or ourselves to expand on what we’re doing.

“We’ve taken our bumps and we got our lumps and bruises, and we know that going forward, we can do this more cost-effectively. I definitely think that this can be replicated at better cost and can provide more benefit to growers and producers in the industry as a whole.”

Does that mean Prestage may build more of these facilities?

“There’s definitely the possibility of putting in additional plants,” says Pope. “We always evaluate what comes along and what makes sense, and we try to stay true to who we are as a company and focus on what we do well. We’re a very successful national pork and poultry company. We’re very good at live production and very good at poultry processing, so getting into power generation and fertilizer production is a new realm, but we’ve got 30-plus years of success behind us and we wouldn’t step out and do these types of things if we weren’t positive we’d be successful
with this.”