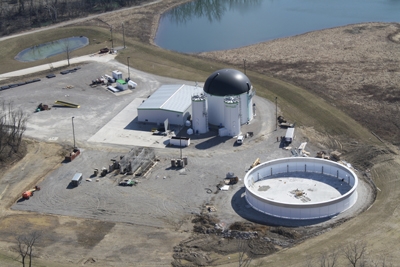 The integrated anaerobic digestion system, known as iADs, is technology developed by the Ohio Agricultural Research and Development Center. A system is currently under construction near Zanesville, Ohio. Contributed

Cleveland-based quasar energy group has broken ground on its first integrated anaerobic digestion system, a patent-pending technology developed by the Ohio Agricultural Research and Development Center (OARDC) to increase the types of waste that can be converted to biogas for energy and fuel uses.

The integrated system, known as iADs, is currently under construction next to quasar’s Zanesville, Ohio, biodigester, which annually processes close to 30,000 tons of agricultural and food waste and can produce 7,800 megawatt-hours of electricity. The company operates additional biodigesters in Ohio and Massachusetts, including its flagship facility on OARDC’s Wooster, Ohio, campus.

The novel system is called integrated because it adds a solid-state or dry biodigester to quasar’s current liquid biodigester, allowing for the production of additional biogas from a number of organic materials with high solids content (such as yard trimmings, crop residue, corn silage and lignocellulosic food waste) that are not suitable to existing anaerobic digestion systems.

“IADs will allow quasar to accept and process a wider range of high-solids feedstocks, including high-volume off-spec and major market recall material – expanding our business to offer customers a full-service solution to their waste management challenges,” said Mel Kurtz, president of quasar. “The partnership with OARDC applies research to improving the way we do business.”

The unique integration of technologies at the heart of iADs is the brainchild of Yebo Li, an OARDC biosystems engineer who specializes in bioenergy and bioproducts. He said the new system has the potential to increase the amount of feedstock available for anaerobic digestion within a specific area, thus reducing transportation costs. It can also boost the amount of biogas generated at a biodigester.

“Biogas comes from the solid nutrients present in the anaerobic digestion process,” said Li, who is also a specialist with Ohio State University Extension. “Current liquid-phase anaerobic digesters used in the United States can only process up to 14 percent solids content. My system has been successfully tested with 20 to 35 percent solids content, substantially increasing biogas production efficiency compared to existing systems.”

Because of the higher amount of solids that iADs can process, this system also generates a compost-like solid residue that can be used as fertilizer.

“This is an excellent story of how fundamental research at Ohio State University is transferred to a private company partner for the public good and the economic prosperity of Ohio,” OARDC director Steve Slack said.

The iADs technology received a $2 million grant from the state of Ohio’s Third Frontier Advanced Energy Program in 2009. Funding has also been provided by the Ohio Department of Development’s American Recovery and Reinvestment Act (ARRA) State Energy Program.

OARDC and OSU Extension are the research and outreach arms, respectively, of Ohio State’s College of Food, Agricultural, and Environmental Sciences.